Record-High Temperatures Are No Joke 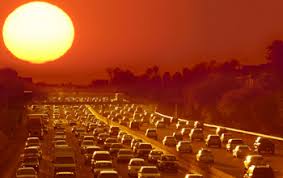 Summer is swiftly approaching, but national and global temperatures have already been unbearable for weeks.

It is not officially summer yet, but American citizens across the country are already suffering from these astronomically high temperatures. With heat levels reaching 94 degrees Fahrenheit in Louisiana and 96 degrees Fahrenheit in Nebraska, it is obvious that this climate pattern is affecting the entire country, not just one certain area. Phys.org reported that during the month of May this year, there were “more than 110 temperature records broken or tied across 21 states.”

Similarly, in an article regarding this massive heat wave, the Washington Post quoted the National Weather Service forecast that “temperatures could challenge records in more than 100 cities… from Denver to Charleston, S.C.” If anyone has spent a day outside recently, they know that these temperatures are nothing to take lightly, and do not seem to be slowing down.

Though this weather trend is inconvenient and uncomfortable, it also threatens the lives of many people and animals. Just a few days ago, around June 16, there was a group of about 2,000 cattle in southwestern Kansas that died during the night due to high temperatures and humidity. If these heat levels continue to rise, it could mean more animal deaths like this, and human deaths as well.

The United States isn’t the only country being hit with these temperature levels. Countries all around the world are experiencing record-high temperatures this year. Heat levels have been reported as reaching 113 to 120 degrees Fahrenheit in areas of Pakistan and India, and global ocean temperatures have been the “eighth-warmest on record,” as reported by Yale Climate Connections. Heat waves are hitting people in every area of the world, causing global annual heat reports to continue increasing in degrees and projections.

2022 is being recorded as one of the hottest years since the 20th century. Yale Climate Connections stated that this year is “more than 99% likely to rank among the 10 warmest years on record,” while the Center for Climate and Energy Solutions declared that recent projections expect that “the annual number of days with a heat index above 100 degrees F will double.” These temperatures will only continue to rise as summer officially starts and climate change continues to worsen; we just have to hope that we can reverse the effects before it becomes too drastic.

Heat levels around the world in 2022 and the years leading up to it have been abnormally high. With temperatures in America and around the world setting new record highs, this year is projected to be one of the hottest years since the 1980s. These heat waves are so intense that they have caused massive animal deaths, and could be expected to cause more if they continue to rise in temperature. Climate change is the lead cause in this increase in temperatures, and we must hope that we can begin reversing the severe effects of it before it is too late.