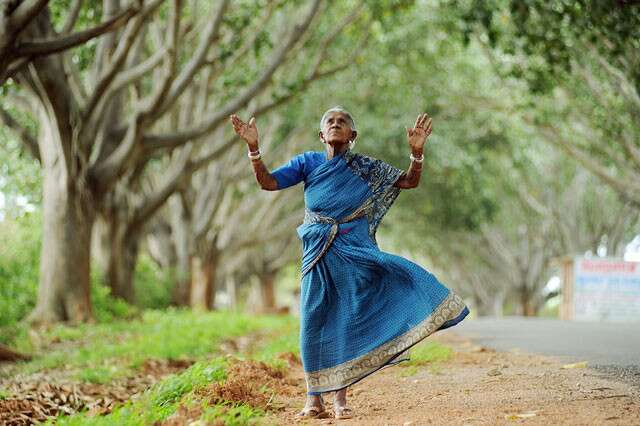 Climate change is real. Though the saying sounds a cliche, it's a truth we can’t deny. The rising threat towards the planet requires keen attention and awareness. There are many celebrities and common men and women who stood up and took the initiative to support the cause. To name a few, Leonardo Di Caprio, the actor who is also an environmentalist, is working extensively by initiating campaigns and charities towards climate change and its adverse effects. Sundarlal Bahugun an Indian environmentalist and the leader of the Chipko movement, Greta Thunberg, an 18-year-old Swedish environmental activist urging world leaders to mitigate climate change, Jadav Payeng also known as the forest man of India working tirelessly in planting and tending to trees and the list goes on.

But one name stands tall among others in the list. She’s also known as the “mother of trees”. She is Saalumarada Thimmakka.

Born in 1910/1911, to Vijayamma and Chikka Rangayya in Gubbi Taluk, Tumkur District, Karnataka, she had great aspirations to gain formal education but poverty and the lack of proper educational facilities came as a roadblock and she remained illiterate. But that didn’t stop her from dreaming bigger. At a young age, Thimakka was forced into labor such as cattle and sheep rearing, mercenary work to support her family by the age of 19, Thimakka was married to Sri Bikkala Chikkayya from Hulikallu village, Ramanagara district who hailed from a modest background as well.

25 years into their marriage, the couple were unsuccessful in conceiving a child and were faced with social ridiculed by society. But the two of them were supportive of each other and decided to plant trees considering them as their children. She along with her husband planted banyan trees and found a purpose in turning the planet green. In the first year, they planted 10 saplings on either side of the road and subsequently increased the number year on year. The saplings were planted mostly during the monsoon season so that sufficient rainwater would be available for them to grow. By the onset of the next monsoons, the saplings had invariably taken root. Today, the 4km stretch between Hulikal and Kudur is a sight to behold with more than 384 banyan trees forming a canopy and providing shade to a great number of people passing by in her village. The management of these trees has now been taken over by the Government of Karnataka and according to the botany report their asset value has been calculated to be around 1.5 million rupees.

The village stigma that followed the couple was overcome by nurturing and turning their village into a green oasis. From the time of World war II until now Thimmakka has been working on tending to trees and helping the world turn greener. The couple worked the first half of the day and planted and aided trees during the second half of the day considering it as great work. In the year 1991, the death of Thimmakka’s husband came unexpectedly who was the main backbone in her endeavor. But it didn’t stop Thimakka or her aspirations. Though she didn’t seek any awards or recognition and served selflessly, eventually recognition followed her from the year 1995 when she was awarded the National Citizen’s Award. Further in the year 1997, she won the Veera Chakra Prashasti Award and Indira Priyadarshini Vrikshamitra Awards.

Over the course of 50 years, Thimmakka has planted over 8000 trees across the nation and found comfort in caring for them. In 1999, a documentary named Thimmakka Mathu 284 Makkalu based on her work was featured and displayed in the International Film Festival of India. With over 50 awards to her name, Thimmakka became an identity inspiring hundreds of thousands to plant trees through her act of afforestation. In the year 2016, she was named one among the top 100 influential women by the BBC for her endless contributions as an environmentalist. 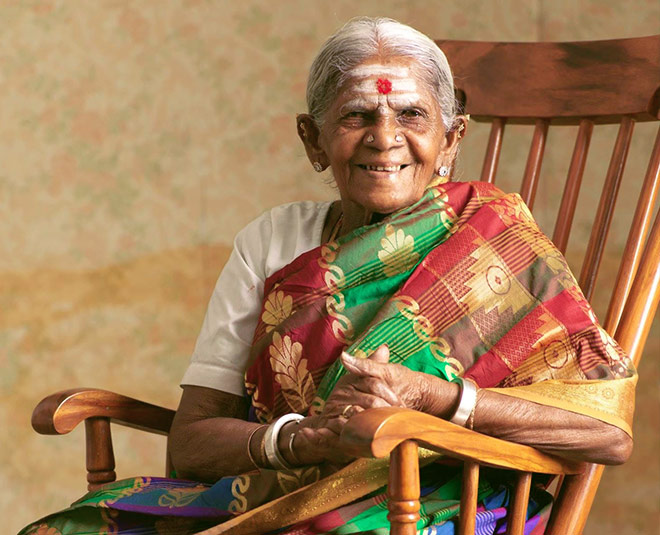 In Kannada, ‘saalumara’ means rows of trees, and her name has become synonymous with trees. She came into light after she received the National Citizen’s Award and thus followed media and accolades in her journey. But 17 years ago, inspired by Thimmakka, a young boy started to plant trees in his school backyard. Hailing from Bellur, Vanasiri Umesh has taken up the mission of preserving the environment in the footsteps of Thimmakka. Sri Umesh B.N has been planting and cultivating trees along the roads, schools, public places, and on the mountain and hilltops. As Thimmakka’s foster son, he is also successfully running the “Prithvi Bachao '' Movement to save and grow more trees to fight deforestation and climate change. Owning his nursery, he distributes plants to the farmers who are interested in growing and nurturing them. Umesh now takes care of the conservation activities through the Thimmakka International Foundation established in 2014 in her honor. She now lives with her adopted son and together they are working towards this cause.

On 16 March 2019, Thimmakka was awarded the prestigious Padma Shri at an Investiture Ceremony, at Rashtrapati Bhavan, in New Delhi. The fourth highest civilian award of Republic India recipient Thimmakka affectionately blessed President Ram Nath Kovind which brought a smile and thunderous applause in the hall. The President later tweeted about it, claiming it as his privilege. “It is the President’s privilege to honour India’s best and most deserving. But today I was deeply touched when Saalumarada Thimmakka, an environmentalist from Karnataka, and at 107 the oldest Padma awardee this year, thought it fit to bless me.” 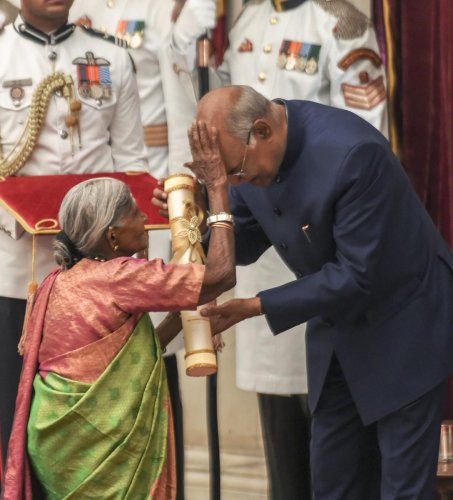 In the same year, she was honored at the second edition of the Karnataka Women Achievers’ Awards. The 110-year-old silviculturist, environmentalist, ‘mother of trees’, ‘Vriksha Mata’- all of the titles she has received-- aims to work constantly towards a greener planet till her last breath and urges the people of the nation to take necessary steps to conserve and protect our environment. A U.S. environmental organization based in Los Angeles and Oakland, California called Thimmakka's Resources for Environmental Education is named after her and is dedicated to following her path. In the year 2020, the Central University of Karnataka has announced an honorary doctorate for Thimmakka. Though she remained illiterate, the story of her life is now a chapter in the English course prescribed for Central Board of Secondary Education (CBSE) students of Std IV.

Every year on the 5th of July, celebrated as World Environment Day is dedicated to Saalumarada Thimmakka as a day to remember her significant role in building an eco-friendly world. In one of her interviews, when she was asked what her message was to those who wanted to follow in her footsteps, the eco-warrior said,

“Plant at least one tree. Take care of it. That’s all I would like to tell you. Because it doesn’t matter if you are a child or a grown-up, you should take care of the environment. If our trees are good, our air quality is good. Good air quality ensures we are healthy.”