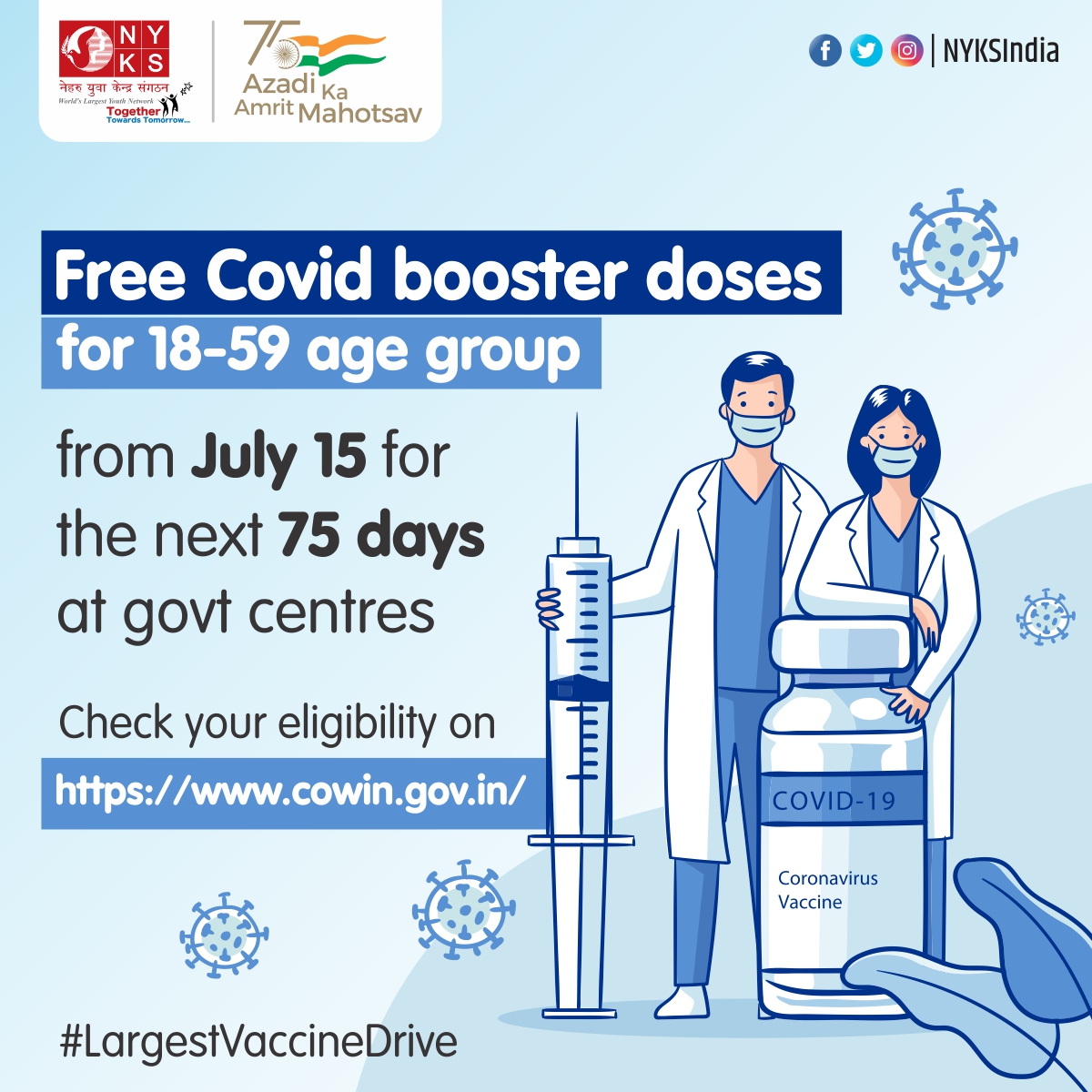 PTI reports that less than 1% of the 77 crore people in the 18-59 age group have received the precautionary dose.

Officials announced on Wednesday that the coronavirus vaccine will be made available for free to all adults in government centres for the next 75 days starting on 15 July Friday.

For the 75th anniversary of Indian independence, the government is organizing the 'Azadi Ka Amrit Mahotsav,' a nationwide campaign to increase the percentage of people who have received the third dose of the HIV prevention vaccine.

Precautionary doses have been administered to less than 1% of the 77 million people in the 18-59 age group.

A booster dose has been administered to approximately 26% of the estimated 16 crores eligible population aged 60 and over, as well as healthcare and frontline workers, according to a report by the Indian news agency PTI.

"Over the past nine months, the vast majority of the Indian population has received their second dose. A booster shot boosts the immune response, according to research conducted by the Indian Council of Medical Research (ICMR) and other international institutions "the official informed us.

It will begin on July 15 and last for 75 days, during which time those between the ages of 18 and 59 will be given free vaccination doses in official government vaccination centres, according to the official.

Since last week, the time between the second dose of the COVID-19 vaccine and the precautionary dose has been cut in half for all beneficiaries. That's according to an advisory group that advises the federal government on immunizations (NTAGI).

On June 1, the government launched the second round of the "Har Ghar Dastak campaign 2.0" across states to speed up vaccination and encourage booster shots. The two-month program has already begun.

The covid vaccine has been administered to 96 per cent of India's population, while 87 per cent have received both doses, according to government data

On April 10, India began vaccinating all adults over the age of 18 with the COVID-19 vaccine as a precaution.

On January 16 of last year, the nationwide immunization campaign began, with healthcare workers being the first to be immunized. Frontline workers began receiving vaccinations on February 2 of last year.

People over the age of 60 and those with certain comorbid conditions began receiving the COVID-19 vaccine on March 1 last year.

On April 1, 2013, all people over the age of 45 were required to be vaccinated. After that, the government decided to broaden the vaccination campaign, allowing anyone over the age of 18 to receive the Covid vaccine as of May 1 of last year.

On January 3, this year, 15-18-year-olds began receiving vaccinations. Vaccinations for children ages 12 to 14 began on March 16.

Even though the Union Health Ministry has announced that vaccinations for those over the age of 18 will be provided free of charge for 75 days beginning on July 15 as part of the "Azadi ka Amrit Mahotsav," the State Government is awaiting guidelines from the federal government, according to Dr Arundathi Chandrashekar, State Director of the National Health Mission, who is also in charge of the vaccination drive.

On Thursday, the Ministry of Health will hold a video conference with all States to explain the details of the free vaccination campaign, she said. As of now, the Indian government has approved vaccination for children under the age of 12, but it won't begin until guidelines are issued by the federal government.

"The booster dose is already free of charge for those over 60 years old. However, the booster dose for those between the ages of 18 and 59 is only available at private hospitals and is charged, so there was some reluctance in this age group to receive a booster dose. Health officials expect the free 75-day vaccination to increase the number of people between the ages of 18 and 59 who receive a precautionary dose. To date this week, Karnataka has reported 1,231, including 1,124 cases in Bengaluru. In the state, the day's positivity rate was 4.78 per cent, and in Bengaluru, it was 6.6 per cent.