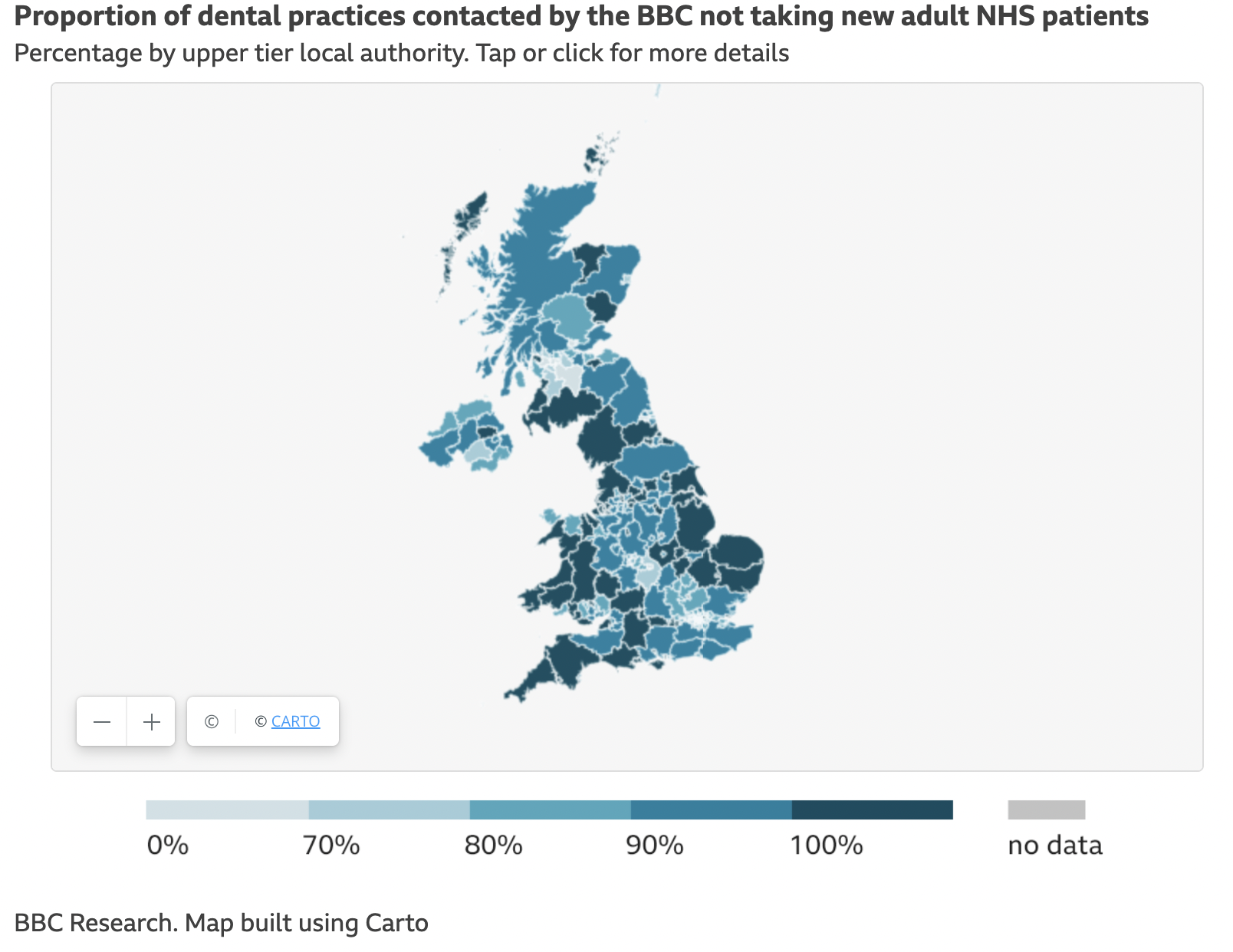 The number of adults and young children unable to be on a Dentistry waiting list is growing at an alarming rate because they cannot take on NHS Patients, a recent study by the BBC reveals.

The British Dental Association (Or BDA) previously warned members of parliament (MPs) that the Dentists’ previously promised contracts, which were better than the original ones made over sixteen years ago, were struggling under the weight of a backlog exacerbated by the pandemic; this led to most people not having seen a dentist for approximately seven years; according to televised interviews with those affected.

Shawn Charlwood, chair of the BDA’s Dental practice committee, had much to say. He admitted that ‘NHS dentistry is at a tipping point, with millions unable to get the care they need and more dentists leaving with every day that passes. We’re seeing the results of years of chronic neglect, set into overdrive by the pressures of the pandemic. The question now is, will ministers step up before it’s too late? Nothing we’ve heard from the government to date gives us any confidence this service has a future. Without real reform and fair funding, NHS dentistry will die, and our patients will pay the price.’

Although the government announced in July this year that following the conference on Oral health, there was to be a dental reform. However, with many Dentists struggling to keep their practice afloat whilst helping the public as they initially wished to do when they trained, it is getting bleak - according to another report by Dentistry.UK’s Lucy Veal in May.

NHS England had more of a direct approach, detailing exactly how the new contracts planned to help with the deficit of dental care, on their website in July following the report.

One thing that seems to be an improvement is that NHS and the Government have been spurred on to act fast after an online petition by a concerned citizen, Joshua Keeling called for signatures of up to 300,000.  It showcases that many people cannot access their right to crucial oral health and that many cannot afford to go to Privately contracted dentists.

However, the wait times are shorter, and the care is often provided by those who were or are NHS Dentists.

What the British public deserves is action immediately, as not only is this consequently affecting people solely in England but also in Scotland, Wales and Northern Ireland too; with the BBC investigation found:

‘One in 10 local authorities did not have any practices taking on under-16s for NHS treatment, despite children in full-time education being entitled to completely free care on the health service.’

‘Not only did we find that in many places, routine dental care was difficult to access quickly, most practices did not even have waiting lists. For those that did, the majority told us the waiting time was a year or longer or were unable to say how long people might have to wait.

One practice in Norfolk told the BBC it had more than 1,700 people on its list, while another, in Cornwall, warned that it would take five years to be taken on as a patient.’ 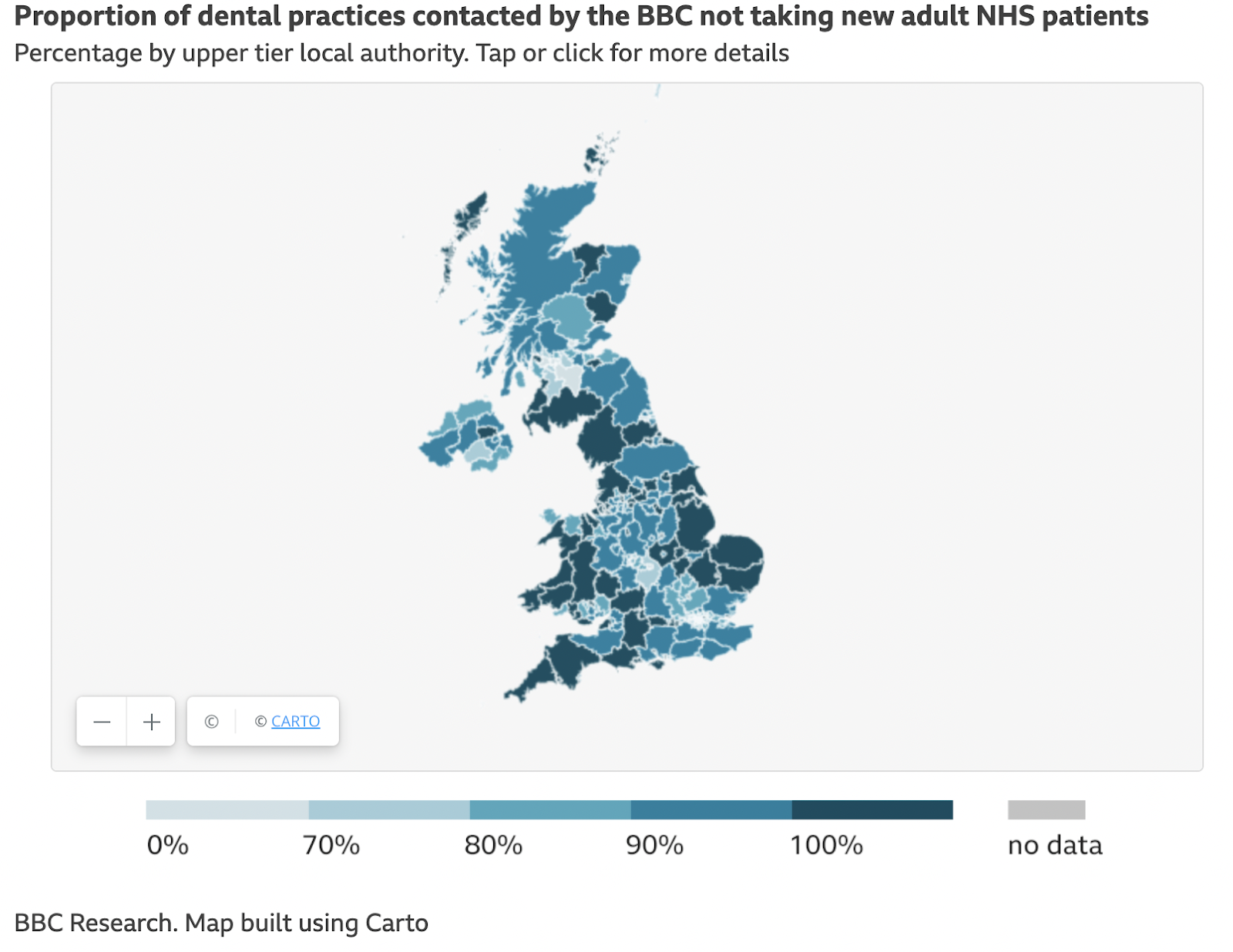 One thing is for sure, the public’s health is getting assistance with this issue in ways that might achieve faster results for oral health than previously predicted.

What the public is anxious to know now are the results-

Will it be a dazzling smile for future generations or a complete toothache?

300,000 Teachers Strike Across England and Wales