Should Cannabis be Legalised 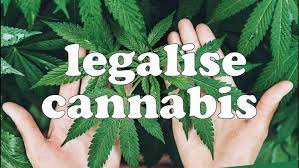 Should Cannabis be legalized?

Do you associate cannabis with good or bad? With this article, I hope you can either change the bad feeling related to it or relate it more positively. We know cannabis, weed, and marijuana are drugs. People use it to get high and to help ease pain physically, mentally, and, or emotionally. It’s inappropriate legally but it can be good in many circumstances. Many people dislike it. Although it can be used for good purposes, it’s the truth and it should be accepted as an alternative for medicinal use and not for entertainment only.

Let’s talk about what cannabis is. Cannabis is a psychoactive drug from the cannabis plant. It can also be used to help treat illnesses such as cancer, chemo, and chronic illnesses. There are many other uses for cannabis with the above being a few options. It's a very high-class drug. It's a class B drug and you could get fined up to 5 to 14 years in prison depending upon the quantity for carrying it, supplying it, or using it. If you are found possessing it, you could also get fined up to £2,500.

Let me shed some light on the pros of using cannabis and why it should be legalized. Some benefits to using cannabis, that many studies like NIH (Newport Academy) have shown are you feel freer and less afraid to do things you have never done before. You can also feel much more relaxed as it eases your pain up to 50% or greater than a placebo if you suffer from chronic pain. There are other reasons why cannabis is good, relaxing, and benefits your health and life. People shouldn’t be scared or be quick to judge when they hear about the fight to have cannabis legalized, they should maybe stop and think to reconsider how much it could benefit somebody’s day-to-day life and how much it would make it easier and take a strain off.

On the contrary, there are many cons to not legalizing cannabis. It creates steep costs for society and taxpayers that outweigh its tax revenues. It harms the brain and will increase mental health issues. It damages the environment and it’s targeted at very young children.  It generates a domino effect where one person uses it and affects everybody around them. It may lead individuals to cut people out of their lives as they became too toxic for them or couldn’t bear to watch them go by and ruin their life by using it.

The advantages of legalizing cannabis include lessening teen usage says a 2020 study of more than 230 teens and young adults in Washington state. It is one of the first states to legalize marijuana for adults. Cannabis helps to reduce symptoms of mental illnesses like anxiety and depression by up to 58%. It also reduces the frequency of seizures for someone with epilepsy. It helps to provide more employment opportunities generating up to 1 million jobs by 2025 across the nation. The nationwide industry would in turn help to boost the economy. On the legal side, we will be able to collect taxes on it. It would lessen crimes and street gangs because they won’t be sold on the black market. It will use less of the police resources since it doesn’t need to nbe monitored, so the police can focus on other priorities. It’s less harmful than alcohol and tobacco, however it may get addictive.

Other advantages of utilizing cannabis. There are more survival chances in heart attack patients. That is because it’s more researched than before and we are practicing its safe use than people were a decade ago. Thousands of people are more willing to try it or test it instead of instantly shutting it down. Cancer patients are willing to try it, and the National Health Service (NHS) runs trials for it and allows cancer patients to try it for people suffering from chronic illnesses. The survival rate of people using cannabis over the years has increased by at least 5% every year. It’s a small amount but it still proves that medical use of cannabis should be permitted given it’s being monitored over a certain amount of time by trained specialists, and it’s done within a controlled environment.

Increasingly, more  people are willing to accept that, it is a good idea if we can support the study behind the medicinal benefits of cannabis for health as it would add to the medicinal value. So it would also be a safe option. Hence, it could be legalized and safely practiced.

If in the distant future the UK legalises cannabis it would benefit the country economically as well as would benefit the people with its health benefits. It would benefit everybody at the end of the day. There would be more job opportunities and businesses for people to produce and supply it. The risk is being addicted to it and young kids would consume it easily but when looking at a country like Amsterdam which has legalized it. The locals don’t do it as much as you’d think, it’s mostly tourists who misuse it more often and become sick.  If the locals do it they do it in a safe environment and also aren’t running around like lunatics. It’s normal for them. We can’t stop young children from consuming it but with proper rules and regulations, it can be minimized if not stopped. Yes, 16 is a young age for them to consume such a drug, yet with awareness about its extreme cases and monitoring with rules, we can hope for the best. We should not stop adults from wanting to try it, if they want to as it’s their choice at the end of the day yet we should certainly place proper rules and regulations for people misusing it. There’s not much that we can do, we just have to be smart about it.

Many people have different views on if we should legalize cannabis and the effects it can have on our youth and our society. The thing is people have attached negative thoughts and prejudiced feelings to the word automatically. They assume the worst scenarios and usually don’t see the other side of the picture of how much it can help people’s lives. Though there are chances of corporations and individuals being corrupted, with more amount being directed to the research with cannabis, it certainly would be of scientific importance. Some may still think the investors, researchers and activists are faking it to get the drug for themselves or are involved in corruption only but it is not proven. Many people suffer from chronic illnesses e.g. cancer, epilepsy seizures, anxiety etc, but the naysayers don’t seem to be able to grasp the idea of what people must face if they don’t get access to the such medicinal value. There are many stories within the UK of children suffering seizures and cancer but they have no access to cannabis. However,  it has changed since 201A8 yet people need to fight for a prescription for it.

In conclusion, cannabis is beneficial in the health and wellness industry should be legalized in a way accessible to get prescribed patients. It should help people with illnesses and not people who use it as a psychedelic drug. It should be prescribed to people who need it and we should create an environment to be able to trust our children to not go extreme with the use of the drug. We should also create enough awareness about it and make circumstances to trust people to use it sensibly and not be daft or go overboard with it.

What are your views on legalizing cannabis? Would you support legalizing it for its medicinal properties as mentioned above?