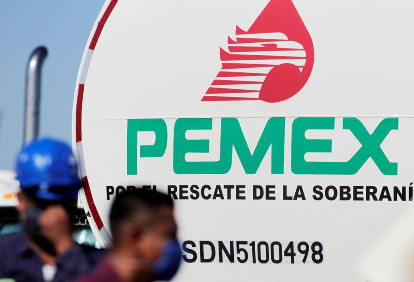 A circular fire on the surface of the Gulf of Mexico resembling molten mud has been called "the eye of fire" on social media. Mexico's state-owned oil company Pemex said,a gas leak in an underwater pipeline sparked a fire near one of its drilling platforms on July 2, 2021. Company ping up that,it controlled gas leaks about five hours later. The major cause of the fire was being investigated, and it is not clear how the leak was caused in the environment. No damage reports in the western part of the Mexican Yucatan peninsula were reported to the moment.

The bright orange flames leap out of the water like molten mud called the "eye of fire" on social media due to the circular nature of fire, as it burns just a short distance from the Pemex oil field. The fire took more than five hours to extinguish completely, according to Pemex.

The fire started in an underwater pipeline connecting the platform to Pemex's flagship Kuzoob Zaap oil development, which is very important for the company. Ku Maloob Zaap is located just above the southern edge of the Gulf of Mexico.

Pemex said, “no injuries were reported, and production from the project was not affected after gas leaks started at 5:15 a.m. local time”. It was completely extinguished at 10:30 p.m.Etroleos Mexicanos said, “a heavy rain and lightning storm on July 2 forced the company to shut down pump stations operating along with the coast rig near the fire scene”.

At the same time, an underwater leak allowed natural gas to build upon the ocean floor. “If it rose to the surface, it could have been ignited by lightning,” the company said.

President Andres Manuel Lopez Obrador has contributed to the demolition of many resources and the purchase or construction of oil rigs. He refers to oil as "the world's best business".

"At the moment, people in power are calling themselves 'climate leaders' as they open up new oil fields, pipelines, and power stations - giving new oil licenses to future oil fields,"Thunberg wrote. "This is the land they left us." Pemex, Mexico's national oil company, has announced that environmental damage has been avoided due to the swift action of its employees.

Pemex sent fire control boats to pump more water over flames, and no one was injured in the incident at Ku-Maloob-Zaap beach. It said no crude oil was spilled. Pemex stated, “he was repairing pumps and investigating the cause of the gas leak.”

The company added that it would investigate the cause of the fire. Pemex, which has a long record of significant industrial hazards at its facilities, added that it also closed 12-inch wide pipe valves.