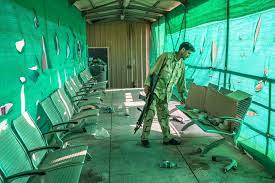 US forces, on Friday, quietly dispersed from the Bagram airbase outside Kabul, writing the end to an era. The US force turned down the Bagram air force to the Afghanistan government. They moved swiftly and quietly from this last base so that the Saigon fiasco of 1975 does not get repeated. The turning down of Bagram, for now, ends its status as a military hub for foreign interventions.

The Afghan government’s security force killed more than 300 Talibani people. This fighting coincided with the departure of America from Bagram airbase. Bagram airbase was the heart for most American military functions.

Joe Biden and Ashraf Ghani met in the White House Oval office. Upon his arrival, Joe Biden expressed the need for Afghan people to decide their future. Joe Biden assured American support for the Country through US and NATO troops, set to leave the country by 11 September. This statement came after the Taliban captured many districts in an offensive war with the government’s security force.

All efforts by the Afghanistan government to talk with the Taliban have been in vain.

Afghans are now in terror and are suffering from anxiety with uncertainty and fear of tomorrow. This fear can be felt and seen, long queues of people seen at Kabul’s passport office. Taliban has increased its attack and is capturing key districts. Amidst this rising tension, people fear for their future and believe that leaving the country assures a safe future.

Afghans feel that they are already in poverty and helpless. Falling into the hands of the Taliban will make the condition worse. In the queue young age, women seen in large numbers. The young women who have grown in the absence of the Taliban fear the deterioration of their country under its rule. These young women feel that they will be sent to hidings and forced to wear the burqa, taking away their freedom.

According to the data of the International Organisation of Migration (IOM), most people are migrating to Pakistan and Iran. These two Islamic countries share their border with Afghanistan and are seeing the migration of Afghan people. According to estimation 3 million Afghans live in Pakistan, and the rest live in Iran. These people mostly live as refugees.

Taliban has imposed various harsh restrictions in the past too. Before 2001 Taliban made rules that girls can’t go to school, and women were not allowed to work outside. Women can leave their houses only with male relatives and not alone. The punishments for breaking rules were horrific, citizens who broke rules were humiliated in public and beaten in the Taliban’s religious places.

While Afghans fear of future the Government security forces are in high spirit. Various soldiers feel that the country is finally theirs, and they will do anything to keep the Taliban at bay. All this suggests that peace talks between the Taliban and Government have been left on the table. The military takeover has been restored and districts are being captured through the military. This is a matter of concern for Afghans.

Efforts are made for peace like the Afghanistan Negotiating team in Doha is trying to bring the Taliban to the table for peace talks. But all in vain as the Taliban is in no mood to listen about peace talks as of now.

People fear of dark future. All women's rights have been rolled back and media blackouts are taking place in the region of The Taliban captured districts. All these issues have left the Afghans with a feeling of uncertainty and fear.