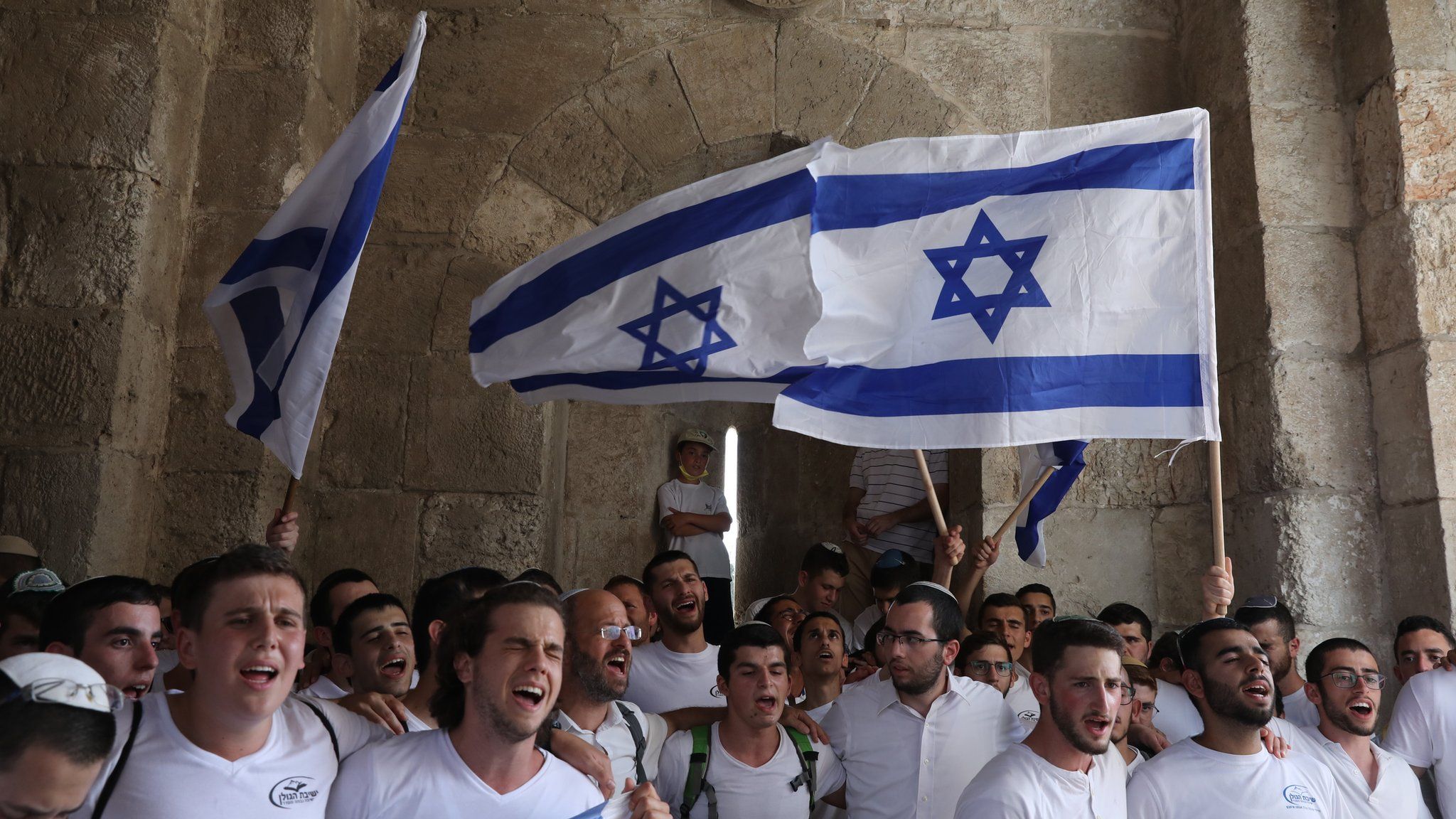 Israeli nationalists waved flags and marched through the Muslim Quarter of Jerusalem on Monday. This so-called ‘Flag March’, has led to increased violence and shed light on the divided nature of Jerusalem in recent years.

The Flag March is a celebration of Jerusalem Day. This marks the anniversary of when Israeli forces took control of Jerusalem in the 1967 Six-Day War. Israeli Nationalists celebrate this event by parading through the Muslim Quarter of Jerusalem, entering through the Damascus Gate, waving Israeli flags, and chanting nationalist slogans.

Last year's Flag March was postponed due to the Israeli war on Gaza and Hamas missile attacks. This year's march featured intense street clashes. The Palestinian Red Crescent Society has reported that 79 Palestinians were injured in Jerusalem, most due to rubber bullets and pepper spray. Live rounds of ammunition were used by Israeli riot police and one Palestinian was injured with gunshot wounds. Five Israeli police officers were injured in the skirmishes.

Participants in this year's Flag March chanted the racist slogan “death to Arabs.” The use of this slogan has been condemned by some Israeli officials. Following last year's Flag March, Foreign Minister Yair Lapid condemned the racism exhibited at the march. “The fact that there are extremist elements for whom the Israeli flag represents hatred and racism is abominable and unforgivable.”

However, some Israeli officials have approved and participated in the controversial march. Itamar Ben Gvir, an ultranationalist member of Knesset, was hoisted upon the shoulders of this year's marchers. Ben Gvir had a portrait of Baruch Goldstein, an Israeli terrorist who massacred 29 Palestinian civilians, hung in his home. Last year, former Prime Minister, Benjamin Netanyahu, attempted to bring Ben Gvir’s political party, Otzma Yehudit, into his governing coalition.

Jeffery Woolf, a Professor of Talmud at Bar-Ilan University believes that the Flag March has deep roots in the history of Judaism. According to Woolf, “There is a very long-standing tradition for hundreds of years, possibly for millennia, of walking around and encountering the various gates of Jerusalem. People would come all over the world on pilgrimage, walk and say prayers at every single gate, and then they would [similarly] walk around the gates of the Temple Mount.”

Palestinian leaders are less inclined to see the Flag March as a deeply rooted Jewish tradition. Speaking on last year's Flag March, the Palestinian Prime Minister called the event a “provocation.” Further elaborating, he said, “We warn of dangerous repercussions that may result from the occupying powers' intention to allow extremist Israeli settlers to carry out the Flag March in occupied Jerusalem tomorrow, a provocation and aggression against our people.”

The killing of Shireen Abu Akleh hung over this year's Flag March. Abu Akleh was a Palestinian-American journalist who worked for Al-Jazeera. On May 11th she was shot dead while working near the refugee camp of Jenin. New evidence reported by CNN uncovers that her death was a targeted killing by the Israeli military. During her funeral, the New York Times reported that Israeli police attacked mourners, leading to her pallbearers nearly dropping her coffin. Some participants in the march gloated over the killing of Abu Akleh. One marcher was filmed near the Damascus Gate, adorned in an Israeli flag, chanting, “Shireen’s dead! Jerusalem is ours!”

Al Jazeera has asked that the killing of Abu Akleh be investigated by the ICC. In the past, the Biden administration has opposed ICC investigations into alleged Israeli war crimes.

Jerusalem has become a site of increased tensions between Israelis and Palestinians in recent years. In May of 2018, President Trump decided to formally recognize Jerusalem as the capital of Israel and pledged to move the US embassy to Jerusalem. This move formalized United States policy from the 1995 Jerusalem Embassy Act. In the following protests against the relocation of the embassy, 37 Palestinians were killed and 1,600 were injured. Violence, at the Flag March, is unfortunately not surprising due to the history of violence related to disputed claims over Jerusalem.

The responses to this year's Flag March could have massive implications for both Israeli and Palestinian domestic politics. The split between Hamas and Fatah has been the defining trend within Palestinian politics.

Fatah, founded by Yasser Arafat, and the party of current Palestinian President Mahmoud Abbas, has clashed with the more militant and Sunni fundamentalist group in the past. The two groups had worked together in opposition to President Trump’s policy in Jerusalem. However, the recent war between Gaza and Israel in the Summer of 2021, once again led to a split between the two groups. The Flag March could lead to reconciliation, as the groups face a common enemy or it could lead to further division as Hamas favors a more militant approach to Israeli nationalism.

The new Israeli government led by Naftali Bennett is also tested by the Flag March. Bennett squeaked to power riding a broad coalition of right-wing, left-wing, and Arab parties. These parties had few similarities in terms of policy and were more broadly aligned against former Prime Minister Benjamin Netanyahu, who was facing corruption charges at the time. Bennett’s stance on nationalist demonstrations, such as the Flag March, could prove pivotal to his survival as Prime Minister. If Bennett is too supportive of the March he risks alienating the left-wing and Arab parties, while if he is too quick to condemn the marchers he could lose his right-wing supporters.

The behavior at the Flag March points to the enduring power of nationalism and far-right politics within Israeli society. Marchers espoused support for Itamar Ben Gvin for Prime Minister, seeming to indicate a long-term political project. Benjamin Netanyahu is still poised as leader of the opposition to return to his role as Prime Minister. A recent poll of Israelis showed that 14% of the population thought Bennett was the best choice for Prime Minister, while 55% of Israelis thought Netyanahu would be best suited for the role. Netanyahu might be out of power as Prime Minister, however, the Flag March shows that Israel is still headed in a more nationalist direction.