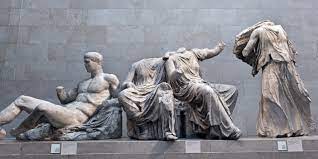 The Parthenon Marbles were looted by Lord Elgin in the early nineteenth century and are now exhibited in the British Museum. Source: Tony French / Alamy.

Lately, the age-old issue of the Parthenon marbles has rekindled between Greece and the UK. This issue has been going on since the 19th century when several pieces were removed from the Parthenon following the order of the British Ambassador to the Ottoman Empire, Lord Elgin. Conversations concerning the return of the stolen artworks were triggered once again after a museum in Italy, more precisely in Sicily, gave back a 2,500-year-old Parthenon marble fragment to Greece.

As DW, the artwork, the so-called “Fagan fragment,” was exposed at the Athens Acropolis Museum after it was returned by the Antonio Salinas Archaeological Museum in Palermo. This event set an important precedent for Athens.

Accordingly, during the fragment's placement ceremony, the Greek Prime Minister, Kyriakos Mitsotakis, opened talks with the UK again as the latter has an extensive Parthenon collection still in its possession. In this regard, the Prime Minister said that "I think it paves the way also for the British Museum to enter into serious discussions with the Greek authorities, to find a solution that will be mutually acceptable."

In November 2021, the Greek Prime tried to restore justice when he met with the UK Prime Minister, Boris Johnson, by making the issue one of the key discussion points. Nevertheless, the UK Prime Minister shifted the responsibility onto the British Museum, where the collection is exhibited, saying that the issue does not pertain to the government.

Nonetheless, the Greek Prime Minister confirmed his intention to continue with the request pinning his hopes on public opinion. Not coincidentally, he stated that “Our request is not a flare. We will insist methodically to build the necessary foundations and to the British public opinion on the need to reunite with the Sculptures of the Acropolis Museum.”

The Parthenon sculptures date back to 2,500 BC. They comprise 56 blocks of friezes and 19 statues depicting scenes from Greek mythology. These marbles are often called the Elgin Marbles, after the name of the British ambassador to the Ottoman Empire in Constantinople, Thomas Bruce, the 7th Earl of Elgin. He gave the order to his staff to remove them from the Acropolis gradually. Removal started in 1801 and was not limited to the Acropolis but to several other antiquities found in Athens. These items were then sold to the British government in 1816.

Since then, the battle put forward by the Greek government for the restitution of the sculptures has been a long one and fraught with difficulties.

Right after the formation of the new Greek state, one of the main priorities of the Greek government was the restoration of the Parthenon, as the monument was considered a national symbol. In 1842, Alexander Ragavis, secretary of the Archaeological Society in Athens, leveled the first official accusation against Elgin by pointing out that the sculptures were looted and should be returned. The request was renewed in 1924, on the centenary of Lord Byron's death, one of the most outstanding foreign nationals who took part in the Greek revolution.

In 1961, the Athens Mayor and the Academy of Athens requested the repatriation of the Parthenon Marbles. The year 1982 is generally considered a watershed as during the UNESCO General Conference for the Cultural Policy in Mexico, the then Minister of Culture and Sciences, Melina Merkouri, presented the Greek government's request for the return of the Parthenon sculptures to Greece.

Ever since the issue is still an open wound for Greece and all the Greeks.

Not long ago, in June this year, a  protest was organized outside of the British Museum to urge the latter to return the sculptures to their legitimate owner. The leading actor involved was the advocacy group, British Committee for the Reunification of the Parthenon Marbles (BCRPM), on the occasion of the 13th anniversary of the opening of the Acropolis Museum in Athens. Several activists intervened by placing Greek flags and a banner inside the museum reading "Reunify the Marbles!"

Nevertheless, the British Museum is keeping a hard line. Accordingly, a museum's spokesperson said that "We will loan the sculptures, as we do many other objects, to those who wish to display them to other public around the world, provided they will look after them and return them." This statement aimed to cut diplomatically off any future attempt on the part of the Greek government and advocacy groups.

More recently, though, in an attempt to tone down the rigid stance, John Williams, deputy director of the British Museum offered the possibility of a “Parthenon partnership” with Greece. This initiative, according to Williams, would “change the temperature of the debate.” Nevertheless, despite the good intention to propose active cooperation between the British Museum and its counterpart in Athens, there was no mention of giving back the sculptures, as they are an “absolutely integral part” of the collection, as Williams pointed out. Consequently, using the usual diplomatic manners, the British Museum discharged the Greek claims by simply saying that “There are many wonderful things we’d be delighted to borrow and lend. It is what we do.”

According to Konstantinos Tasoulas, former culture minister, the possibility of acting in legal ways is still a good option. Nevertheless, he maintains that the best way to work is through public opinion. As  reported by the DW, the former minister said that "The legal route remains a valid option, but it's the moral and political pressure that will ultimately yield a solution. Public opinion within the UK has shifted dramatically in favor of the marbles' return."

The discussion around the Parthenon marbles, but also the justification adduced by Lord Elgin when artworks were taken away, is not far away from the analogous ones currently ongoing in several African countries.  According to the respectable British lord, these pieces would have in the British Museum ''an honorable shelter,'' safeguarding them from “ignorance and degradation," as stated in the British Museum Act.

Similar justifications were given by the European colonial powers that looted, for many decades, the African countries they occupied. As Annabelle Steffes-Halmer explains in an opinion written for the DW, the main idea was that these artworks would have better treatment in Europe. Africa was considered incapable of protecting its heritage. As the author points out, this is a clear racist discourse, and now several European countries realize that what has been looted must be returned. They call what happened in the past "colonial contexts of injustice," an expression that hides the usual hypocritical stance, as discussions around this issue began forty years ago. No African leader was ever invited to the negotiations.

It is easy to see a parallel between Greece and its incapability to take care of its heritage. The Western colonial powers presented what happened in the past as a noble gesture, as heartfelt support to preserve the occupied countries' legacy. This, however, looks like a paradox as the same occupying powers created those dire conditions for the colonized countries. Whatever interpretations are given, the results remain unchanged: the occupying authorities stripped numerous countries of their inalienable rights to their own culture and heritage.

The fact that some countries belonging to the supposed developed world where the words “human rights” reign supreme persist in this stance by putting forward several dubious justifications for not returning what has been stolen is merely tragicomic, to use a euphemism.

300,000 Teachers Strike Across England and Wales