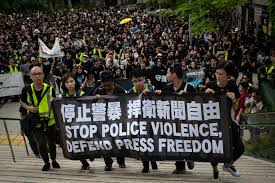 Last week, Hong Kong's national security police, detained the editor-in-chief and four other directors of the Apple Daily newspaper, in early morning searches involving hundreds of officers, for participation in the publication of scores of articles believed to be part of a plot with foreign forces. John Lee, the city's security head, accused those arrested of using "journalistic activity as a tool to harm national security," issuing a frightening warning to citizens and other journalists.

“Normal journalists are not like these people,” Lee explained. “Please maintain a safe distance from them.”

The five were arrested on suspicion of collaboration with a foreign country, and external elements to threaten national security. According to the police force's national security section, through publications that authorities said called for sanctions to be placed on Hong Kong and mainland China. At approximately 7 A.M They were all detained at their houses. Police then searched Apple Daily's newsroom and offices, claiming that the order granted them "the right of searching and seizing journalistic documents." “The continuing operation intends to gather evidence for a case of an alleged violation of national security law,” it added.

Police also froze the assets of three firms, Apple Daily Limited, Apple Daily Printing Limited, and AD Internet Limited, totaling HK$18 million (the US $2.3 million). Next digital, the parent firm, announced the suspension of trade of its shares before the markets, opened on Thursday.

The police operation represents a dramatic increase in the government's efforts to suppress Hong Kong's press, with the pro-democracy tabloid largely regarded, as a principal target.

The editorial writer for Hong Kong's Apple Daily newspaper has been arrested, the latest step in a national security law-enforced media campaign that saw hundreds of police invade its newsroom and arrest key individuals last week. On Wednesday morning, police arrested a 55-year-old man in Tseung Kwan O on suspicion of "conspiring to conspire with foreign countries or foreign forces to undermine national security."

Later, the pro-democracy Apple Daily recognized him as its lead opinion writer, who goes by the pen name Li Ping.

Li is the first reported arrest of a writer in connection with the police operation, which began last Thursday. Authorities claimed the five arrested executives, including editor-in-chief Ryan Law and CEO Cheung Kim-hung, were responsible for more than 30 publications calling for foreign sanctions against the Hong Kong and Chinese governments.

Police would not say which publications were declared acts of foreign cooperation, but they did say some went back to 2019, well before the law's June 2020 implementation, which is not supposed to be retroactive.

Li has authored several comment pieces for Apple Daily in which he criticizes the government's crackdown on the pro-democracy movement and the media. Following the arrest of Apple Daily founder and owner Jimmy Lai last year, Li stated that Beijing was expressing its displeasure with US sanctions by targeting Hong Kong media and people.

Li criticized the prosecution of RTHK producer Bao Choy, who had used a publicly available database as part of her study into a horrific attack on demonstrators in Yuen Long in 2019.

Under the headline "Freedom, once an everyday item, now a luxury," Li accused the government of attempting to intimidate the press by "using all sorts of legislative and judicial tools to try to silence Hong Kong's journalists and drive media outlets, to close down willingly."

The board of directors of Apple Daily's parent company, Next Digital Media, has stated that if authorities do not release the paper's blocked funds and accounts as part of the operation, they will be forced to close on Friday.

Apple Daily has already suspended its financial news and English language services, as well as its nightly web broadcast, and several employees have resigned. Saturday's edition is believed to be the last.