Hostages In Our Lands- How Much Longer Nigeria? 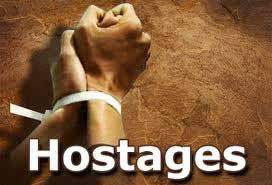 Insecurity is one of the negative trends on the rise in Nigeria, with the hotspot being Northern Nigeria (Northwest regions). The term insecurity is no longer be a novel word in the country. The attacks from Jihadist-Boko Haram to banditry and kidnappings are fast becoming the center focus and headlines in the country.  Despite the rise in the confusing and unforgiving Covid-19, cases such as rape, cattle raids, kidnapping, village attacks, and armed robbery continue to increase daily.

Mayhem and destructions are recorded in many regions. With an increase in the number of cases as time goes by, the people living in the affected districts are helpless. They are in dire need of sanctuary, especially in these unpredictable dark times. Despite some still trying to remain unruffled even as this whole situation continues to unveil itself deeper, most people are hopeless as each new case continues to add an insult to the injury, creating a void of hope in the hearts of the hopeful.

What was the course leading to the crisis? History dictates that this all started due to arguments and clashes over land and resource issues between the Fulani herders and the Hausa farmers. After a long struggle of conflict, the land ownership laws favored the Hausa farmers leading to some herders turning and practicing dubious criminal activities with Libya, the source of supply, of the illegal weapons they use. The overwhelming feeling of anger and disappointment, which has been an undertone, has continued to be expressed in these violent ways, with the government still failing to quench their wants and needs and settle the score.

It is also said and believed that the other cause of this inhuman behavior is the failure to unite the different communities into coming to terms with a unified political system. Each community is now existing as a separate entity, with areas in the Northern regions lacking a proper and firm community policy. This lack is creating a bad feeling in the middle of the ongoing criminal activities.

In the past decade, many kidnapping cases were recorded, and in 2014 the abduction of 276 Chibok schoolgirls by the untamed Boko Haram brought worldwide attention with the former first lady Michelle Obama in support of the campaign #Bringbackourgirls. The kidnappings have proven to be more economical than political, as was thought by many. According to the report released by SB Morgan Intelligence- the Lagos-based political risk analysis firm- at least $18.34m has been paid as ransom between June 2011 and March 2020.  And with more cases still reported, more is expected to be paid as the situation continues, to worsen, becoming one of the many challenges facing the Nigerian security department.

The abduction of the 344 boys in Kankara Northwestern of Katsina state seems to have ignited another wave of the same with news regarding their release not known by the locals. And since then, 769 students have been kidnapped from educational facilities across Northern Nigeria in five separate incidents, to mention but a few; March 11th midnight attack school raid in Kaduna state and the Jangebe bandit attack in Zamfara state; kidnapping 300 girls.

The surging increasing cases have also left many worries and fears as some believe that the bandits are influenced by the long-term insurgents- the Boko Haram. Some bandit groups have joined wars with Abubakar Shekau- the leader of the Jihadist group terrorizing the country. Needless to say that he is one of the most wanted criminals.

The worrying part is that no prosecution or arrest is made since December.

What are the government authorities doing? The crisis has led to the loss of lives as well as poor socio-economic activities. Due to increased fear and tensions, schools have been closed. 10.5 million children are out of school. The number is one of the large number recorded of out-of-school-going children according to the United Nations. In a brief talk with Al, Jazeera Anumudu made it clear that security is a basic need. And the government should ensure and enhance smooth back-to-school for the students, or else there will be a big problem due to insecurity.

The journal of social sciences research and academic research group had given the following as the causes of the ongoing kidnapping; abject poverty, climate change causing the herders to use that as a source of income, corruption and fraud, political influence, joblessness, terrorism, and lack of capital punishment by the government. Besides, they try to analyze the possible ways of curbing the insecurity crises and factors such as; job creation, new policy implementations, public awareness, and empowerment programs, sim registration, cutting ransom payment as that could lead to the regain of secure Nigeria.

President Muhamadu Buhari, who took office in 2015, posted on his Twitter handle, emphasizing the need to improve security around schools. He also warned against the policy of rewarding bandits with money and vehicles as this could be one of the causes motivating the bandits to continue with the inhuman acts. Dickson Osajie also told Al Jazeera that criminality is to be eliminated. Sadly the government lacks the power to achieve this. He later added that bargaining with the enemy was a sign of weakness.

Are these warnings valid and genuine? Will this confusion come to an end, or will the Nigerian people continue to be hostages in their land?