Islamophobia is Sweeping Sweden Away 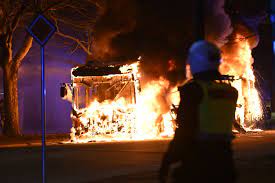 Riot police stand guard as a bus burns in Malmo, Sweden, on Saturday after violence broke out [File: Johan Nilsson/EPA]

Last April and May have witnessed several riots in Sweden respectively to the actions undertaken by a far-right Danish-Swedish politician Rasmus Paludan with a strong anti-immigration and anti-Islam orientation. Riots began in early April when the politician burned a copy of the Quran, leading to at least 26 police officers and several civilians wounded. Riots broke out in several cities like Stockholm, Malmo, Norrkoping, Linkoping, and Orebro, among others.

More recently, Paludan burned the Quran during the holy month of Ramadan, an action that took place close to mosques in several towns of the south-western region of Vastergotland, populated by Muslims. Also in Malmo, Norrkoping and Jonkoping and Stockholm Muslims raised their voice leaving 125 police vehicles damaged and 34 officers injured, and 13 people were detained.

Burning the Islam holy book is a practice applied several times in the past by the same politician and leader of the Danish far-right party Stram Kurs (Hard Line), targeting especially those Swedish cities with a considerable Muslim community. In 2020 similar scenes could be once again observed in Malmo, the third Swedish largest city as well as in the Stockholm district of Rinkeby.

The bold leader has not chosen these locations randomly. Malmo has in fact a total population of 329.783 of which over 150.000 are immigrants. The biggest community is undoubtedly the Muslim immigrants coming mainly from Iraq. Likewise, Rinkeby in Stockholm is a densely Muslim populated area often labeled as a ghetto.

The far-right leader, already back then, did not hide his racist feelings by openly and harshly declaring that “Islam is an evil and primitive religion that has no place in Denmark, Sweden or any other civilized society.” On that occasion, the police denied his request to burn the Quran in public. Although the imam Mahmoud Khalfi suggested that the Muslim population does not react strongly and ignore the acts, it is hard to stand this kind of provocation and the recent riots are a proof of this.

The main issue that stands out as a paradox in Sweden is that a country outspokenly based on the strict respect for human rights and tolerance allows the leader of a far-right group to burn a holy book with the protection of the police. The Swedish authorities` formal justification is freedom of speech, but this is clearly encroaching on other people`s human rights, in this case, the Muslims.

This paradox is well demonstrated and indirectly highlighted by the fact that whenever the far-right leader appears at a scheduled rally, police must take the lead to ensure his protection. Accordingly, he had to be protected in early May by circa 100 police officers as well as 10 plainclothes ones from the Swedish intelligence agency.

Nonetheless, the strong presence and influence of the Swedish Democrats party, once banned because of its far-right nature, and now the third party in Sweden, points to a crucial change in the public opinion`s orientation. Such provocations could fuel further the party`s negative rhetoric against Muslims in Sweden, consisting of a strong juxtaposition between us (the Swedes) and them (the Muslims) and linked to the image of Islam as backward and related to terrorism. This could potentially help the party strengthen its presence in the upcoming September parliamentary elections.

According to the deputy chair of the Municipal Council of Vernamo and Social Democratic Party politician, Azra Muranovic, these provocations were planned and not at all an accident. She in fact openly stated that the burning of the Quran was not an accident but rather a planned and distasteful campaign to provoke these riots by using freedom of speech.

Going further in the interpretation of these events, the Muslim Swedish Youth`s former chairperson Rashid Musa discusses the historical dimension of the phenomenon. Going as far back to the 1920s, he points out that the strategy of burning relevant, for a specific group, books were also implemented by Nazi Germany against the Jews through the burning of several Jewish literature and manuscripts.

In relation to the Swedish Democrats party, he clarifies that problems like criminality and lack of proper integration should be attributed not to failed domestic policies but to Muslim culture and political correctness.

In the meanwhile, some Swedes are wondering why this Swedish-Danish national is harming Sweden so much. Justice Minister Morgan Johansson comments on this by referring to the online claims connecting Swedish social service agencies to the kidnapping of Muslim children labeled by the Minister as an outright misinformation campaign.

The minister has emphasized that the problem appears to be more profound as a link between these kidnappings and an existing Arabic-language website. This would be compounded by the fact that the website`s creator allegedly adopts a pro-ISIS stance. These statements point, therefore, to the involvement of Middle Eastern actors at the expense of Sweden.

While it is unknown whether these are ISIS-led activities or just a stunt used by far-right elements, like Paludan, what is sure is that the situation sparked the reaction of both the Iranian and Emirate governments that summoned Swedish diplomats to protest. The same reaction came from the Iraqi government, whereas Saudi Arabia declared that these acts are deliberate and organized by Swedish extremist groups by abusing the holy Quran.

Concurrently, the Swedish police are trying to contain this unprecedented wave of violence, reporting that at least 200 have been involved in it and that all this seems to have been organized by a network of criminal gangs. At the same time, though, the police are toughly criticized by Paludan because unable to protect him. He was in fact obliged to cancel a rally in Norrkoping when he said he would appear there.

It is Interesting to mention what happened when the far-right leader appeared in the city of Jonkoping in late April for his scheduled rally. He was obliged to stop his speech as the bells of a nearby church overwhelmed his voice. This might be an indirect protest against Paludan and support towards the Muslim community.

Rasmus Paludan started his Quran burning shows in Denmark in 2017. He has started his activities on YouTube by publishing bold anti-Muslim videos where often, as a tribute to freedom of speech, he wrapped the Quran in bacon. Danish authorities reacted to his actions by sentencing him to jail in 2019 for racist speech in Denmark but, apparently, this was not enough to stop him.

His powerful hate-speech slogans are polarizing Swedish society One cannot remain indifferent to statements such as “The enemy is Islam and Muslims. The best thing would be if there were not a single Muslim left on this Earth, then we would have reached our final goal,” as he stated in a 2018 video.

These are uncertain times, geopolitically speaking. The Russian invasion of Ukraine, Sweden`s bid to join NATO, and the specter of new possible invasions require a united society. The Muslim community in Sweden is massive, and most of these people mainly seek integration. Therefore, achieving societal cohesion and a united front again external threats in Sweden would be more effective rather than spreading hatred and violence.