Meet the new Indian barbie that reminds us why representation matters 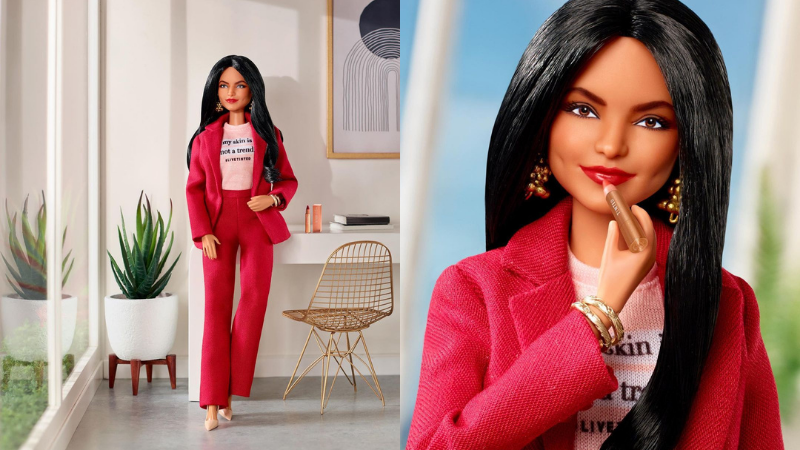 Barbie has played a significant part in the fashion doll market for over sixty years. She became the main character in many people’s childhood. Acting as not only a toy, but also an educational tool for children to celebrate diversity and culture.

Typically, when people hear ‘Barbie', they imagine a thin, blonde, white woman. Yet with the company's advancements it seems that in a few years, that will no longer be the case. This year, the CEO of beauty brand, Live Tinted, Deepica Mutyala announced a doll made in collaboration with Barbie, which presents features other than the western projection.

Barbie has become one of the most diverse dolls in the world. The first African-American doll was introduced to the public in 1968, The first apparent East Asian Barbie, released in 1981 in the “Dolls of the World” collection, and Hispanic dolls in 198O.

As a brand, Mattel improved on their diversity in 2010 when they started releasing dolls with a wider variety of body sizes, ability status, skin color, hair texture, and more. The company has made constant changes in the last 5 years making the famous doll more inclusive every time.

In 2018, Mattel launched the Barbie inspiring women series where they showcased over 17 historical and modern-day role models. The series came with educational information about how those women have shaped the society we live in. Among these women were Ibtihaj Muhammad, Frida Kahlo, Nicola Adams Obe, Katherine Johnson, Sara Gama, and many more.

Announced in March of this year the Desi doll came just in time for Women's history month. This barbie dons brown-tinted skin, bold brows, and big eyes. Proudly wearing jhumkas and bangles with a power suit.

The founder and CEO of the beauty brand, Live Tinted, Mutyala - who comes of Indian descent - has collaborated with American toy company Mattel to create the doll.

The unique Barbie was announced by Mutyala on her Instagram account [@deepica] where she talked about the personality of the doll, generating a positive buzz on the social media platform;

"She breaks cultural barriers; aims high with intention. Leads with empathy & kindness. A fearless go-getter with a deep desire to make an impact in the world. She’s a CEO. THIS is the new Barbie.", but it is a great visual representation of how the South Asian American Barbie is ready to change the world.

Companies such as Barbie. promoting representation and diversity offer inspiration to children. And subsequently exposes them to countless possibilities of what their future could be. As they are shown fierce role models that are unique and beautiful in their own way.

The sense of ‘future self’ that dolls offer is critical for a child to develop in their early years. It gives them hope and motivation, which is essential as children are more likely to look up to someone that looks like themselves.

Research carried out in 2017 suggests that an absence of representation can guide to negative psychological outcomes for those with identities that are underrepresented or negatively portrayed.

Recently the brand has taken to social media, releasing vlogs by ‘Barbie’ on youtube. These videos have set the tone for getting across the message of equality to children and opened important discussions such as mental health. Launched in 2015 the platform engages Barbie with a younger audience enabling them to develop interpersonal skills.

Sanjana Desari, a university student from the University of the Sciences, shared with us her thoughts on the new Indian Barbie;

“I think the Indian doll is a great addition. It is starting to truly show the level of inclusivity and recognition of different cultures and I’m all for it.”

Desari shared that coming from an Indian heritage and not being exposed to a diverse representation had an impact on her as a child. According to Desari, “not having a culturally and physically relatable toy as a kid put some pressure on me as a kid as I thought that I wasn’t considered ‘normal.’ My darker skin tone and black hair showed a stark contrast to that of the blond-haired blue eyes stereotypical Barbie figure.” she confessed, “I always felt uncomfortable when I also saw kids with American girl dolls which looked exactly like them. As a child, I would constantly put face masks on and try any method to lighten my skin tone because I wanted to look like the defined ‘pretty.’”

The journey of accepting her culture has evolved with time and she meditated on what impact this doll holds, “All I can say now is that I am starting to feel more comfortable in my own body. I love my culture and identity,” Desari tells us.

Desari’s experience is only one example of how lack of representation in children's toys impacts a child's perspective, “It could impact children in such a positive way because they will be able to understand that there’s beauty in everyone and that beauty does not need to be defined by your features but should be defined by who you are as a person. I think having this doll inspired by Deepica Mutyala is also incredible because she is an extraordinary person who lived a similar childhood to me.”

Representation has become the heart of the Barbie brand, evolution and continuous change is what the company reflects. The brand's journey towards diversity is a great portrayal of how inclusivity seems to be moving forward in society. Barbie's Indian representation is something worth celebrating.

4 months, 3 weeks ago by sanjanadasari06

This is a beautifully written article! Thank you for portraying my opinion so well and I can’t wait to see what you accomplish in the future!!