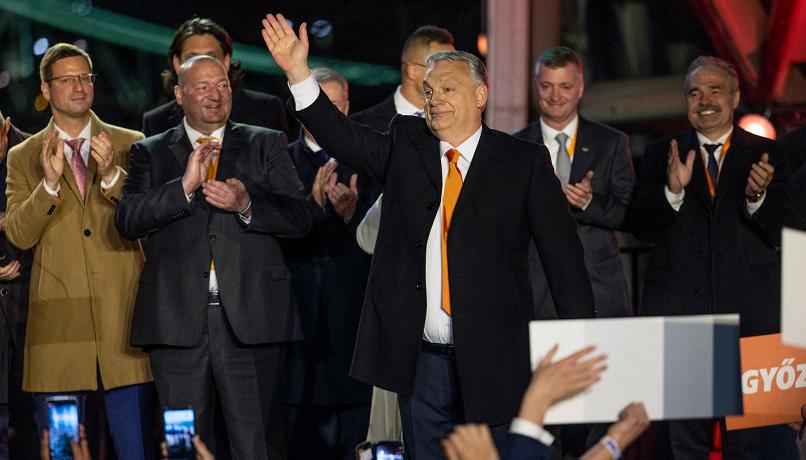 Viktor Miháli Orbán is a Hungarian politician who has served as Prime Minister of the nation from 1998 to 2002. For the second time, he took office in 2010 and has since been re-elected four times.

During his first mandate, as Head of the conservative coalition, he worked to ensure Hungary’s active participation in European affairs and oversaw the country’s entry into the North Atlantic Treaty Organization (NATO) in 1999.

When in 2010 he was re-elected, he used his party’s majority to approve a series of laws that resulted in the embodiment of a new constitution, which radically changed the country’s legal framework. He weakened the legal check previously imposed on its authority and undermined several human rights. He diminished media freedom, imposed his ideas on the press, and negatively interfered with the rights of women, lesbians, bisexuals, and transgender people, who are subjected to discriminatory provisions under his government. These legal measures have reinforced the beliefs of homophobes, who feel legitimized by law in their attacks on LGBT+ people.

He also created a media regulator called “Media Council” guided and supervised by a political figure directly linked with the government of the country and passed a law that made homelessness a crime, which can cause imprisonment as well. During the years, Orbán de facto established a very conservative and authoritarian regime, within a religious and mentally closed framework. Under such a system, people couldn’t freely express themselves, nor enjoy basic liberties.

The Hungarian Government led by Viktor Orbán has been frequently criticized by international functionaries. Being part of the European Union, the country has been a target of many recommendations issued by the Council of Europe and the European Commission, whose leaders have expressed strong views against Hungary’s political position. The country’s policies do not, in fact, align with the standards promoted by the EU, especially the protection of human rights. It represents a major problem within and beyond the premises of the Union.

On the 3rd of April 2022, with 53% of the votes, Orbán has been re-elected as Prime Minister for the fourth successive term. In 2021, before the latest elections, he had become the longest-serving Head of government in the European Union. The leader turned the country into a so-called Kleptocracy, a government whose leaders are corrupt politicians and enrich themselves by abusing powers and misappropriating government funds.

Results of the elections have been a recurring subject in many debates. Since the press is bound by restrictions and limitations issued by Orban’s government, the opposition has not been duly represented on social media and television compared to the nationalist party, the Fidesz (Orbán’s Party), which has been largely publicized.

Moreover, the Prime Minister, in the course of his mandates has made several changes to the Hungarian voting system, which according to critics, have rendered elections unfair. The opposition has also complained that Fidesz had a huge advantage since it had only 20,000 election advertising billboards throughout the country against 2000 of the opposition.

The fact that a political leader is able to govern a country for so long is a pressing concern. It represents a serious threat to democracy and displays a step towards the creation of an autocracy. The most important powers of a country, being concentrated in the hands of a single person for a long period of time often gives rise to problems and, in this case, reinforces those already present, such as depletion of liberties like the right to vote, censorship, discriminations against minorities, human rights violations. Central to these problems is a prevarication of the executive power over the judiciary and legislative functions.

Already shaken by the war in Ukraine, the world once again witnessed an extraordinary event - following the re-election, countries of the world have been divided between those who support and those who are deeply against the permanence of the Hungarian Prime Minister.

The associated election of the Serb President Aleksandar Vucic represents a serious menace to the democratic institution of Europe. As a matter of fact, both Orbán and Vucic are allies of Putin.

Italian leaders Matteo Salvini and Giorgia Meloni, along with the French extremist right, and all of the European sovereigns, and populists congratulated the Premier for his victory. They also expressed admiration for his strength and goodwill. Orbán is indeed considered a point of reference for all right-wing European alliances. Of the same thought is President Vladimir Putin, who commented on the election stating that "Despite the difficult international situation, the further development of bilateral partnerships fully satisfies the interests of the peoples of Russia and Hungary”. On the contrary, Zelensky, Biden, and the great majority of EU states have demonstrated concern for the fate of the European Union, which to some extent, even if small, will be touched by the measures that Orbán’s government will adopt.

“The entire world can see that our brand of Christian democratic, conservative, patriotic politics has won, we are sending Europe a message that this is not the past, this is the future” declared Orbán during the speech he made following his success. He also criticized Zelensky, calling him an opponent and a cowardly act, especially in this tragic period when Ukrainians are facing huge damage to life and property.

Orbán’s re-election represents the triumph of illiberal democracies, characterized by unfair elections and corrupt politicians. Citizens are cut off from information about the activities of the government under Orban. To sum it up, the re-election is a major step backward in view of the progress made in recent decades.