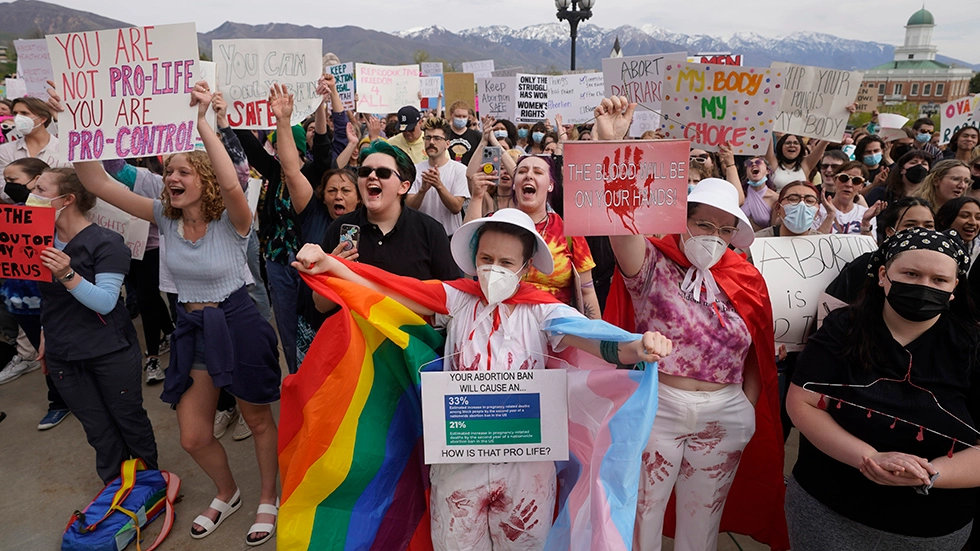 On May 2nd, 2022, the U.S. Supreme Court voted to overturn Roe vs. Wade's landmark decision court case in an initial draft majority opinion by Justice Samuel Alito. Justice Roberts confirmed the authenticity of this draft since this information was released to the public. Until the court's decision is finalized, public outrage has outpoured. Yet there's a community that goes unnoticed regarding abortion rights: LGBTQ people.

When asked about their first response to the possibility of Roe vs. Wade being overturned, K said, "I tried to find sources that would give me the other side's perspective despite not agreeing with it. And I just..like why?? Leave our bodies alone, please. So much of health care is an uphill battle as it is. Why is letting people have the choice on what is best for their bodies such a radical idea?". E said, "Anger, sadness, fear. Though I wasn't entirely surprised, I was more than a little disheartened and disgusted". Historically speaking, many community members faced barriers to accessing primary healthcare for various reasons.

When followed up regarding their concerns with the possible overturning of Roe vs. Wade as an LGBTQ person, E said, "Roe vs. Wade was important for LGBTQ people, but all people, especially those born with an AFAB reproductive system. This is a step in the wrong direction, and I fear it will encourage conservatives to strip the rights further away from minorities. Gay marriage could be threatened, as could transgender rights". K also said, "I am apprehensive about the foster care and adoption system because it's abysmal. It's only going to worsen." For members of this community, so much more is at stake than others realize. In some U.S. states, transgender rights are already under attack with various bills in local legislation.

When asked what access is like to resources in their area and the impact this will have on it, Ace said, "Access to abortion and birth control resources in my area is protected by state legislation." However, C said, "Overturning roe v wade will reduce funding and thus reduce access to resources that certain places like planned parenthood provide." Access to resources varies from state to state in the U.S. Planned Parenthood may be the only option people have access to via public transit, while others may have more options to clinics in their area.

When asked how this affected their reproductive decisions, E said, "if I were raped, this could harm my ability to get an abortion should I find myself pregnant, which would be devastating and likely lead me to leave the country to seek aid." On the other hand, G said, "N/A. I am not sexually active or considering children in any way. It's not something I currently have to consider". Even within the community, members do not share the same position on the matter.

When asked how this would affect LGBTQ care in their area, C said, "Negatively, a decent portion get their services from places such as planned parenthood." E said, "There is very little LGBTQ-specific care in my area." Other interviewees said it would not affect their care or were uncertain. Specific care for the LGBTQ community varies depending on where it is located in the U.S. This care also depends on an individual's health insurance plan if they do.

When asked about how this impacted their future career plans, interviewees said they did not or were unsure.

In terms of impact on living accommodations, both present, and future, E said, "It doesn't, at least as far as I know at the moment, though it does encourage me to want to move to a more liberal state." C shared a similar sentiment, "This makes me hesitant to move to certain areas, as I feel like there would be a lack of resources and Healthcare institutions where I would be accepted and adequately cared for." It's understandable to consider moving for these reasons. Families have moved to different states for the sake of their LGBTQ children. Other interviewees said it did not impact their living accommodations.

When asked why this matters and who else is affected, K said, "It matters. It affects everyone. LGBTQ or otherwise, if this gets overturned, people's ability to choose for themselves and choose what their body needs will be threatened. This is labeled as a women's rights issue. But it's a human rights issue. It matters to everyone even if they don't see why yet". C said, "Roe v Wade isn't just abortion rights; people forget there's a lot of pressure regarding having a child, which accesses to abortion can help alleviate. Rulings like these often afford other rights taken for granted, such as a right to privacy in this case. There are also privacy rights that are granted by roe v wade. I think everyone is affected by this".

When asked about how others can help with this issue, G said, "Contact your representative, Attend protests, Donate to pro-abortion organizations." E said, "Spread the word, and spread good information. Speak up against this and other government decisions for us without consent". K said, "Read. Listen. And know it's Ok to be confused. Don't go into a conversation ready to win. Just listen". These are great suggestions to get started in helping the LGBTQ community regarding these issues.

Justice Alito believes Roe vs. Wade must be overturned as the U.S Constitution does not refer to abortion, and the original reasoning was weak. Another argument Justice Alito wrote in the draft is the increased demand for adoption in recent years makes abortion unnecessary. Justice Barrett suggested at the December argument for laws to surrender newborns on a no-questions basis. However, the decision has yet to be decided as of this publication.