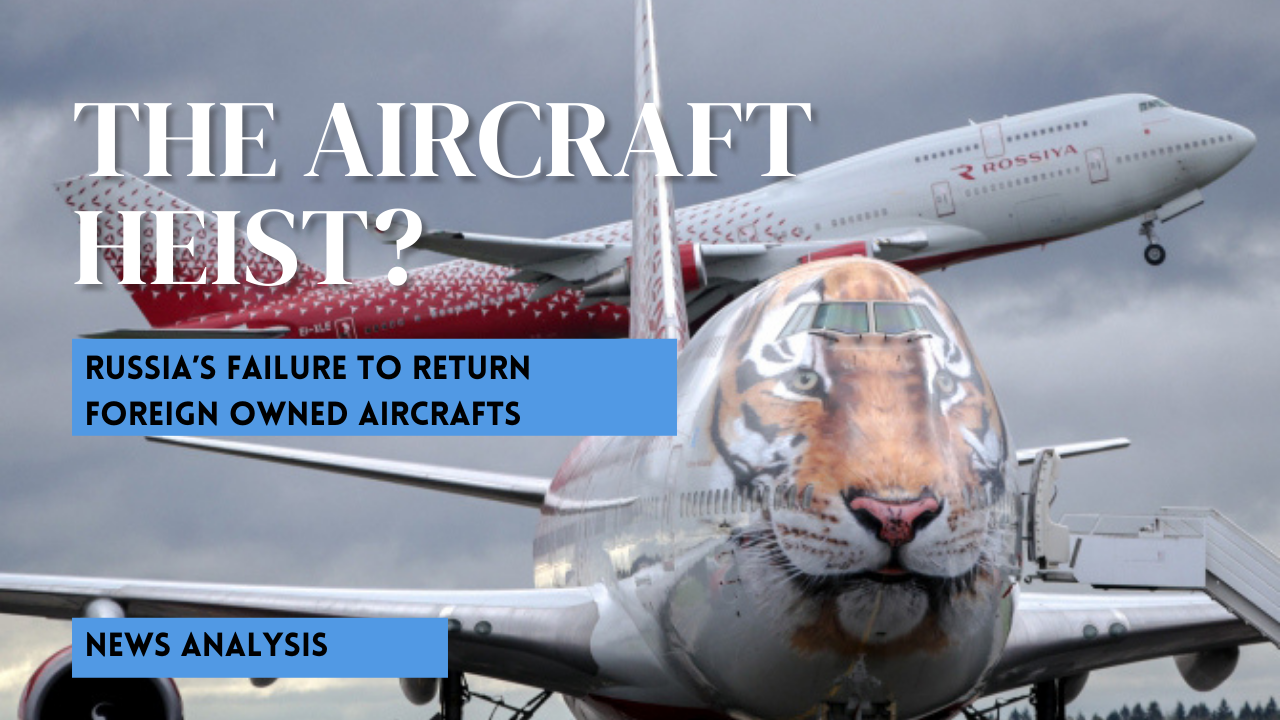 The Russian- Ukraine war has formed as the major story of the year 2022. From the analysis of the military campaign by both countries, to the economic effects that are triggered round the world. The conflict between the two states is one that has been of a concern in the international system. Among the industries greatly affected by the war is aviation.

According to the International Air Transport Association (IATA), the Russian Federation’s aviation industry accounted for nearly $22.7 Billion of the country’s GDP, with nearly 1 million jobs supported by the same sector. The country further recorded its best results in the post pandemic period, mainly due to its robust domestic industry.

However, as the threats of war and the inevitable incursion into Ukraine occurred, came the sanctions from the Western powers mainly the US and European Union ranging from the financial sector, key industrial products as well as the aviation sector. Russia being the ____ largest in the world, shares an essential need for avionic equipment for their aircrafts that operate for their local carriers. Ranging from aircrafts, their parts as well as the technology used, the country mainly outsources mainy of their products from companies such as Boeing and Airbus the largest aircraft manufacturers in the world based in the US and France respectively. Furthermore, according to Reuters, nearly 1000 of the aircrafts that are operated by Russian Airlines are leased by foreign companies in countries such as Ireland, Bermuda and Singapore.

As a result of the sanctions, the Air Lease companies revoked licences for all their aircraft operating in Russia and given until the 28th of March to claim their aircrafts from the operators. However, due to the risk of losing many of the aircrafts to their lessors, this resulted in the Russian government banning all international flights, in a bid to protect their aircrafts as well as their airlines.

Russian Airlines mainly lease their aircrafts to international leasing companies such as Aercap and SMBC Aviation Company as well as Avolon, which are the three largest aircraft leasing companies of the world based in Ireland. This is because the Russian poses relatively high taxes for insurance and registration for locally used aircrafts, thus in a bid to cut costs, airlines lease from abroad. However with the onset of the sanctions and revocation of the licences, the Russian government has been adamant in protecting its aircrafts, further violating the International Law of Convention On International Interests in Mobile Equipment, also known as the Cape Town Convention of 2001 which calls for the adherence of all regulations pertaining the acquisition, maintenance as well as repossession of equipment of high value.

The actions of Russia have resulted in heavy losses of the leasing companies as they are unable to retrieve their aircrafts. With nearly 523 registered aircrafts on ground, it was a race against time for many of the companies to attempt to repossess their aircrafts, among the companies Avolon,  stated that they were able to only retrieve only 4 of their 14 aircrafts, resulting to a loss of nearly $200 million according to the CEO Dómhnal Slattery. The state of Bermuda, which has been greatly affected by the leasing crisis, recently revoked the licences of all the Russian operated aircrafts that they had registered. According to the International Bureau of Aviation (IBA) 745 of the 1,000 aircrafts are registered in the Island country

While many of the other leasing companies were yet to retrieve their aircrafts, many of the efforts were proven to be futile as their aircrafts would face a significant loss of value as a result of the lack of access to the maintenance accounts that are stored by the Russian operators. The document is highly essential for the maintenance of the value of the aircraft as during the re-sale process, customers depend on these documents to certify the durability and conditions of the aircrafts when they are in operation.

Additionally, many of the companies believe that creating a platform to enable the carriers to pay back the leasing companies would be ideal to recover their losses, however due to the sanctions given by their home countries, such activities would result to the infringement of the embargo given by their governments thus lowering the possibility of retrieving the aircrafts.

Future of Russian Aviation; What Next?

As Russia continues to operate aircrafts without Airworthiness certificates as a result of the sanctions, the country’s aviation crisis is set to deepen, as many of the stakeholders of the sector such as oil companies, technology used in data entry have withdrawn from the country. With key companies such as Shell Petroleum, Amadeus among others pulling out of the Russian Federation, the industry is expected to grind to a halt, as the aviation sector is globally interconnected and with the exclusion of Russia, shall not only reduce its economic opportunities, but also will lower the potential safety of millions of travellers in the country.

While peace talks between Russia and Ukraine are underway, many of the lessors have expressed their disinterest in continuing to do business with Russia, so as to prevent the huge losses from happening while they trade in the future.

The devastating war in Eastern Europe has shown the role and importance of upholding international law. With the violation of crucial laws by the Russian Federation continuing, it remains essential for the international system to ensure that accountability of the laws can be more effective, and actions taken to be more proactive so as to avoid long term effects of the global economy.