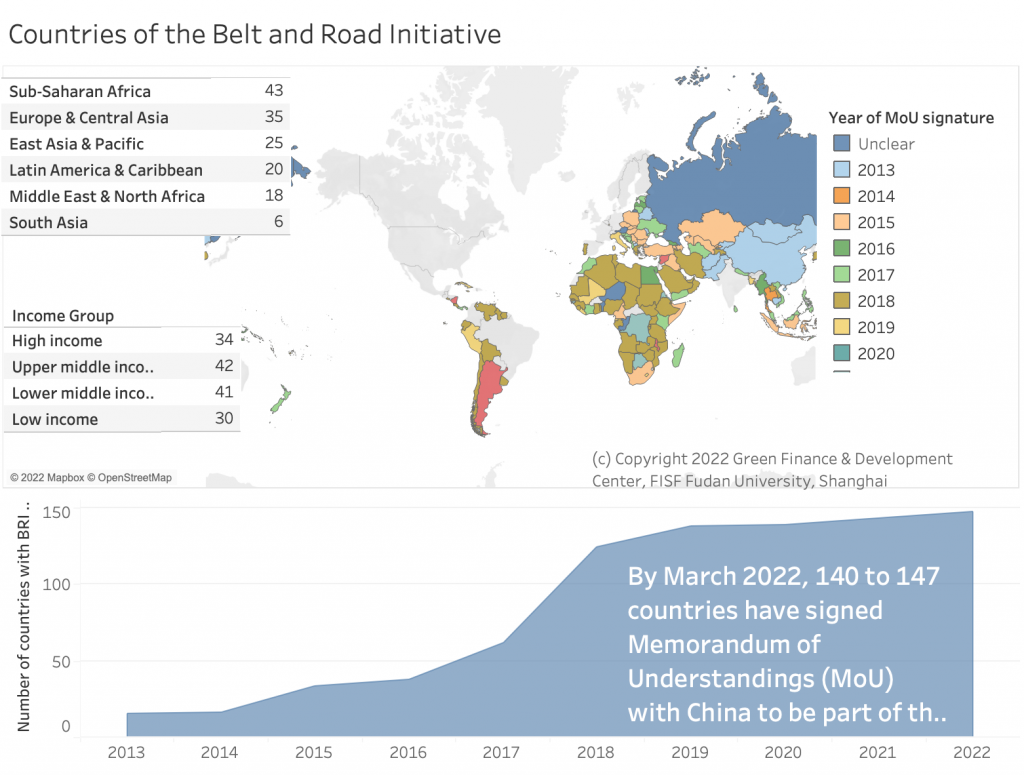 The Belt and Road Initiative (BRI) is the ambitious program announced by China’s president, Xi Jinping, in 2013, known as OBOR—One Belt, One Road—until 2016. BRI is a worldwide long-term policy and investment initiative aimed at improving infrastructure and speeding up economic integration among countries along the historic Silk Road path. According to the project’s official summary, BRI aims to “promote the connectivity of the Asian, European, and African continents and their adjacent seas establish and strengthen partnerships among the countries along the Belt and Road; set up all-dimensional, multi-tiered, and composite connectivity networks; and realize diversified, independent, balanced, and sustainable development in these countries.” They built cooperation upon five pillars: policy coordination; infrastructure connectivity; unimpeded trade financial integration; and connecting people. Although planned as a global effort, the initiative concentrated on countries with rising economies in Asia, Eastern Africa, Eastern Europe, and the Middle East, given that the project was built on the old Silk Road.

The ambitious program did not hesitate to cross the ocean and reach South America. The Chinese government provided a $10 billion credit fund for infrastructure projects in 2012 and in Latin America, the overall investment activities in 25 countries surpassed the sum of $160 billion. This is the most generous amount of help to Latin America that, besides infrastructure, includes projects as well aimed at industrial growth and food security. Access to the BRI also means access to new technology and innovations, as well as modern trade instruments such as e-commerce, distance education, and online healthcare.

China’s inroads in the South American markets have increased the list of countries involved in the BRI worldwide. In March 2022, this number amounted to 147, and more precisely, 43 countries are in Sub-Saharan Africa; 35 in Europe and Central Asia (including 18 countries of the European Union (EU) that are part of the BRI); 25 in East Asia and the Pacific; 20 in Latin America and the Caribbean; 18 in the Middle East and North Africa; and 6 in South East Asia. The extent of Chinese involvement worldwide is well represented in the map elaborated by the Green Finance and Development Center active at Fudan University in Shanghai, which can be found at the beginning of this article.

The projects launched in South America are several. There are, however, some considered China’s flagship initiatives, which are applauded by local governments for improving the lives of local people. Two of these are the $1.52 billion Forth Bridge over the Panama Canal and the $5 billion Bogota Metro Line 1 project in Colombia. The BRI, through the China Communications Construction Co (CCCC), a Chinese infrastructure titan, completed them despite the pandemics. Longstanding efforts in the South American market paid off for the CCCC’s SDC dredging service. The company managed to successfully expand to Brazil, Argentina, and Uruguay, offering a cheaper alternative to the locals in a market thus far dominated by European firms. In 2020, besides the two already mentioned, the CCCC had already developed major projects like the Maya Train in Mexico, the São Luís Port in Brazil, the development of French Guyana’s international airport, Jamaica’s North-South Highway, the Santiago Port Update in Cuba, the Airport Channel in Ecuador, and the San Borja Highway in Bolivia.

The success of the CCCC in South America is possible because the company has access to several Chinese banks. One example is the São Luís Port, which was granted $700 million in financing from the Industrial and Commercial Bank of China. Nevertheless, CCCC’s involvement in the region caused some suspicion among the local authorities, given the company’s shadowy past. Several irregularities and scandals linked to projects carried out in other regions of the world led the World Bank to officially ban the company and all its subsidiaries due to fraudulent practices in the Philippines National Road Improvement and Management Project. The sanction imposed forbade the CCCC to participate in any road and bridge projects financed by the World Bank Group until January 12, 2017. In South America, several concerns have been raised regarding the ongoing projects. For instance, in São Luís, protests have been going on since 2014  as the Chinese company is suspected to have exploited local land grabbing schemes. Many locals are protesting to protect their houses, whose majority has been destroyed to make way for the new port. Consequently, only 34 locals have remained in the region out of the initial 250. Also, irregularities concerning the CCCC’s involvement in the construction of the Panama bridge have been highlighted. This concerns the consortium Panama Cuarto Puente, as it obtained a rather low score in the technical evaluation and its offer amounted to $327 million, much more than its closest competitor. The consortium was composed of the China Communications Construction Company and the China Harbour Engineering Company.

Notwithstanding these concerns, China continues relentlessly with its expansion. The electricity sector is another key factor. Through several acquisitions, Beijing managed to establish its presence in the Latin American energy generation sector as of 2021. In Chile, authorities approved the $3 billion sale of Chile’s Compañia General de Electricidad (CGE) to the Chinese state-owned electric utility company State Grid. This, combined with past purchases in the country, gives China 57% of the overall electricity transmission activities in the country. Along with electricity, the Chinese government has also focused on solar, wind, and nuclear projects. Some of the major hydropower endeavors involve at least seven projects in Ecuador; three in Bolivia; two in Argentina; five in Chile; two in Peru and Honduras; and one in Colombia.

This tangible Chinese involvement did not leave the US indifferent. US President Joe Biden has stressed the importance of more economic initiatives in South America, traditionally seen as the US’s backyard. In line with the 2022 National Defense Strategy, the US is now reclaiming leadership in South America in an attempt to counter the PRC’s increasing presence there. Accordingly, President Biden proposed the Build Back Better World (B3W) launched in 2021 during a meeting between the US President and the G7 leaders. This is an international economic initiative focused on improving infrastructure in low and middle-income countries, particularly in Latin America. Nevertheless, the project is currently grappling with funding, time, and other difficulties.

Moreover, Senators Bob Menendez and Marco Rubio have proposed, in February 2022,  bipartisan legislation to fight China’s harmful influence in the region. They maintain that Russia and China’s rising intervention in Latin America and the Caribbean are the greatest threats to the US. Consequently, the US must be a trustworthy leader and partner in the region. This will be achieved mainly by bolstering multilateral security cooperation and counter-narcotics operations. More recently, in June 2022, President Biden is expected to introduce the Americas Partnership for Economic Prosperity. This is a new pact aimed at reviving and growing our hemisphere’s economy and improving the lives of our working people.

The main problem with this project is that the US relies more on ideological aspects. The exclusion of Venezuela, Nicaragua, and Cuba confirms this tendency. On the contrary, China’s BRI is largely invested in these countries, drawing criticism from the fact that Beijing is bolstering authoritarian governments in Latin America. For instance, Venezuela became the region’s leading buyer of Chinese military hardware after the United States banned all commercial arms shipments to the country in 2006.

Lack of inclusiveness and focus on ideological aspects may be counterproductive to the overall US involvement in the region. Blending economic cooperation and politics may push Latin American countries more toward China, particularly if Washington continues to discriminate against the BRI on an ideological level. Song Junying, director of the Latin America and Caribbean Department at the China Institute of International Studies, was clear in this regard. He maintains that the political atmosphere between China and Latin American countries, as well as the level of economic cooperation, are such that the latter will not pick sides or join any exclusive clubs proposed by the United States to set China aside.