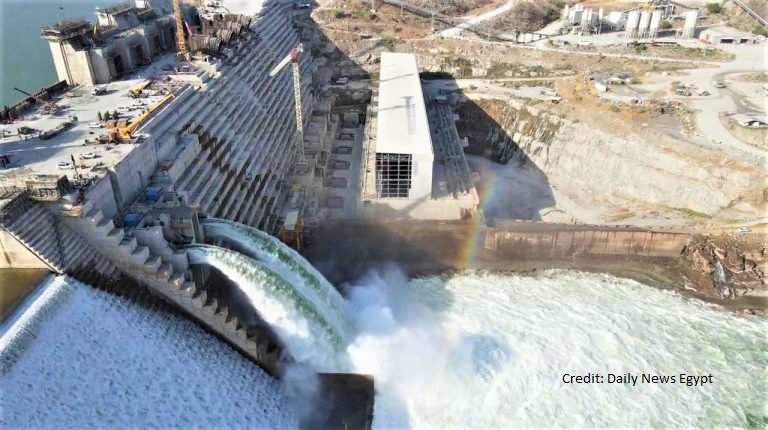 The Great Renaissance Dam is a project initiated by Ethiopia in April 2011, a period of full turbulence in Egypt; 3 months after the January 25 revolution. While the construction and completion of this dam will provide many benefits to Ethiopia, it will nevertheless project as many negative effects on Egypt and Sudan. For ten years since the beginning of the crisis, the Egyptian foreign policy had resorted to certain strategies in an attempt to control its possible repercussions. According to the classical liberal school of international relations, interstate relations are relations of cooperation rather than relations of conflict. Also, according to neo-realism, the search for security guides the external behavior of states, and it is achieved through either cooperation or the creation of alliances or military reinforcement. Recently, the phenomenon of bandwagoning or rallying has also been witnessed. So, to what extent has Egyptian foreign policy evolved vis-à-vis the Renaissance Dam?

To begin with, Ethiopia initiated the construction of this project for several purposes, including economic purposes. This hydroelectric dam, on the edge of the Nile, is supposed to be the largest dam in Africa so that it is able to retain almost 74 billion cubic meters of water and then generate electricity. This will have the effect of helping this landlocked state to emerge on the regional and international level and help it to develop economically through the export of the electricity produced. However, considering that 80% of the water in Egypt comes from Ethiopia, this project will certainly harm Egyptian interests. To clarify, Egypt's own Blue Nile water quota, worth 55 billion cubic meters, will drop and could lead to drought and reduced agricultural and food production. It is then a disaster that affects the national interest. Its destruction would also be catastrophic, since it will imply the flooding not only of Egyptian but also Sudanese territories. Added to this idea is that such an initiative on the part of Ethiopia constitutes a violation of treaties, such as that of 1959, which grant and specify this water quota to Egypt.

According to the neorealist school, war exists because nothing prevents it. This is due to the absence of a central authority in the international system. Thus, faced with this project, Egypt has asserted a certain position. In 2012, President Mohamed Morsy proclaimed the possibility of mobilizing all the tools available to Egypt in order to curb the construction and completion of the Dam. He actually threatened to announce war on Ethiopia. The war here is a war of self-defense. So the state sought, not to increase its power, but to ensure its security through military tools. However, no war was started against Ethiopia. Negotiations took place from 2012 to 2013, in committees responsible for assessing the effects that the Dam may have on Egypt. These committees ended up demanding that the construction of the project and its economic and social consequences be reconsidered. However, these negotiations were suspended for a good period later.

On the other hand, Egypt's strategy to deal with the crisis has gradually changed. After the dismissal of Mohamed Morsy in 2013, President Sissi decided to restart negotiations after a period of neglect on this essential subject. But this time, without any allusion to the use of violence or the aggressive language previously used. Egyptian foreign policy aimed for calm discourse that would eventually lead to a consensus or agreement satisfactory to the three states involved; Egypt, Sudan and Ethiopia. Therefore, President Sissi repeatedly stated in 2014 that Egypt does not seek to block Ethiopia's passage to progress, but to harmonize mutual interests so that Egypt does not suffer uneasiness or complications. Egyptian foreign policy negotiations have taken this path from now on, trying as much as possible to preserve an atmosphere of peace and understanding, despite constant provocations from Ethiopia. This is to avoid at all costs the use of armed force, and relieve Egyptian-Ethiopian tensions. In 2015, an agreement was signed between the three states, which enacted the principles to be applied by each of the states in a framework cooperation and protection of interests. This treaty was the basis of the negotiations for negotiations pursued by Egypt, while declaring its firm rejection of any unilateral action or decisions by Ethiopia. However, the latter did not slow the pace of construction, and Ethiopia even announced in 2016 that 70% of the dam was completed. The negotiations, held mainly by the Minister of Foreign Affairs Sameh Choukri, have therefore suffered successive failures since 2015 and have not led to any progress in this file. To the point where Egypt favored in 2019 the intervention and mediation of international actors such as the World Bank and other States such as the United States to assist it in reaching an agreement on the filling by strongly denouncing the obstinacy of the Ethiopia.

According to neorealism, states seek to ensure their security through the formation of coalitions or alliances or the building of military capabilities. Also, through bandwagoning, a strong state can induce weaker states to join it. Thus, faced with the failure of the efforts made by the diplomatic tool, the Egyptian State has embarked on a new strategy to put pressure on Ethiopia. Egypt, between 2020 and 2021, sought and obtained support and coalition with other states. For example, during the visit of Kais Saïd Head of State of Tunisia to Egypt, the two States affirmed their cooperation in several areas, including the economic field. Kais Saïd had announced in exchange the definitive support of Tunisia for any decision taken by Egypt towards the Renaissance Dam. Moreover, this strategy was followed especially with the African States which surround Ethiopia on the geographical level. Like Kenya, Sudan, Burundi, Uganda and finally Djibouti, especially before the second filling of the dam. For example, on May 30, 2021, President Sissi paid a visit to Djibouti in which he concluded trade agreements aimed at economic support and investment projects in the country. This is to strengthen diplomatic relations and ensure Djibouti's support for Egypt in the Renaissance Dam case. On the other hand, Egypt has strengthened its military cooperation with each of these states, specifically with Sudan, with which Egypt has participated in several military trainings such as "the Protectors of the Nile" and "the Eagles of the Nile". Egypt is thus trying to form a unified bloc, which will act in its favor, facing and opposing Ethiopia. In general, Egypt and more particularly Egyptian foreign policy fulfills the same function and aspires to the same goal as that of Ethiopia, which is to ensure their respective security. They then apply the principle of differentiation of the neo-realist approach.

To conclude, Egyptian foreign policy applied principles of liberalism and neo-realism in reaction to the Ethiopian project; the Renaissance Dam. It mobilized all diplomatic tools and began co-opting allies to champion its cause as another strategy. The proven persistence on the Egyptian side is a response and a refusal to the provocations and non-cooperation on the Ethiopian side. Attempts to protect Egyptian interests threatened by the project then continue until today.