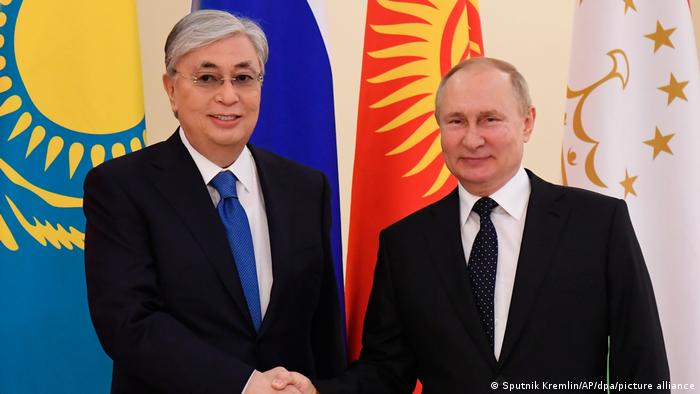 Kazakhstan is part of the so-called Russian "near abroad". Exactly like Ukraine. This area comprises the countries of the former Soviet Union and, in Russia's understanding, they should remain in its sphere of influence. Given Kazakhstan's strategic geopolitical location at a crossroads between Europe and Asia, as well as its oil and gas wealth, it is easy to understand why the country has piqued the interest of several international actors, including China, the United States, and the European Union.

But the issue is also a matter of principle for Moscow: interference in what is considered its own space, its century-old backyard, is not accepted, and in Kazakhstan, as it happened as well in Ukraine, the situation has become very fluid. This acquires even more relevance as the country hosts a considerable Russian community in the northern region whose proximity with Russia may turn it into a potential easily manipulable political instrument, a danger Nur-Sultan is aware of.

This awareness is, to a large extent, responsible for the cautious position held by the country when it comes to the war in Ukraine. As it is well known, the ongoing conflict is dividing the world into three sections: Russia's opponents, supporters, and non-aligned countries. Kazakhstan's position, although it can be categorized as neutral, seems nevertheless difficult to decipher.

A good starting point to shed light on the country's stance is the latest meeting between the Kazakh President, Kassym-Jomart Tokayev, and the Russian President, Vladimir Putin, during the St. Petersburg International Economic Forum (SPIEF), which took place on June 17, 2022.

During the session, the Kazakh President had to face the challenging questions posed by Margarita Simonyan, head of the Kremlin-funded RT television network, currently sanctioned in the West. The questions, revolving around the inevitability and the legality of what Russia calls a "special operation" in Ukraine, aimed to reveal Nur-Sultan's position over the conflict, throwing the president a curve ball. Tokayev, taken off guard (or maybe not), based his answer on the incompatibility of the rights to territorial integrity and self-determination with the principles of international law and the UN’s Charter.

Someone or many may say that the president was extremely courageous. It is not an easy matter to speak out against Russia. And this acquires further significance when the Big Bear's frenzy is looming over your country and your country refuses to recognize the Donetsk and Luhansk People's Republics (DNR and LNR) in front of the Russian President.

The Kazakh President's response raised issues in Russia. Many were outraged. Accordingly, he was chastised for implying that Russia might invade Kazakhstan, thus turning the country into a second Ukraine, and his words were interpreted as a downright challenge to Putin.

In the hail of criticism that ensued the meeting, someone went even further by questioning the very existence of a Kazakh nation. This was the case with Konstantin Zatulin, Deputy Chairman of the Committee on CIS Affairs of the Lower House of Parliament. The politician drew attention to the presence of large Russian communities in the north of the country. The main problem seems to be not so much the fact that Kazakhstan decided not to recognize the two autonomous regions as independent states but the president's boldness in stating this openly in front of the Russian president.

Moreover, he lingered on two other points. First, the very presence of those conspicuous Russian communities questions the very existence of a Kazakh nation. Second, he referred to the status of Kazakhstan as a member of the CIS and CSTO (the Collective Security Treaty Organization, the NATO equivalent in the post-Soviet area), saying that this membership entails specific obligations on the part of its members. Accordingly, he stated that “When no one expects anything from them, they could at least keep silent.”

But these views have a precedent. The same Russian president, on the morrow of the annexation of Crimea, said that the former Kazakh president, Nursultan Nazarbayev, “Created a state on a territory that never had a state” and that “Kazakhs never had any statehood, he created it”. Some years later, the issue was raised again by Vyacheslav Nikonov, a lawmaker belonging to the United Russia party. His position is elucidated by his statement: “Kazakhstan simply didn’t exist, northern Kazakhstan was uninhabited and Kazakhstan’s territory is a big gift from Russia and the Soviet Union.”

It is inevitable to draw a parallel between Putin's speech after the annexation of Crimea and the reference to the fact that the region was given as a gift to Ukraine by Nikita Khrushchev in 1954.

Consequently, the business forum in St. Petersburg that revealed Kazakhstan’s overall position on the war in Ukraine can be interpreted as a clear sign from the Kremlin. As commented by the news and analysis portal, Eurasia Review, Putin said that the special operation in Ukraine could have been avoided if Kyiv had behaved like Nur-Sultan. This implies that, at least until recently, Russia praised Kazakhstan's position on its previous foreign policies.

Nevertheless, this also implies that for the Kremlin, there are only two possibilities: being a junior partner and ally of Russia, especially if membership in the CSTO or the Eurasian Economic Union (EAEU) is involved, or being against Russia. No middle way.

This brief, and far from being exhaustive summary can give an idea of the challenging position Kazakhstan finds itself in. but, as usual, politics is one thing, and society is another. Accordingly, it seems that Kazakh society is currently divided and voicing its concerns not only about the situation in Ukraine but also about the presence of the Russian community and its attachment to Russian politics, given also the strong presence and influence of Russian media in the country.

A recent article released by Nastoyashee Vremia is clear about that. Many Kazakh citizens are currently filing complaints about the presence of the symbol "Z". The online newspaper, citing Radio Liberty, reports that a local resident was arrested for seven days for drawing the Z symbol on a tank near an obelisk dedicated to the soldiers who died in World War II. The incident happened in the city of Saran, in the Karaganda region, located southeast of Nur-Sultan.

According to the Kazakh service of Radio Liberty, displaying the Z symbol is not officially prohibited in the country. However, in several cities, owners of cars with such stickers were fined under an administrative article for violation of the rules for operating vehicles.

The man was, therefore, charged with the offense of "petty hooliganism".

Likewise, Russian tourists registered similar behavior when visiting the country by car and displaying the questionable symbol. The sticker "Z" was not welcomed by the local citizens, who labeled the Russian tourists as fascists.

But these are not the only open protests ongoing in the country. On March 6, more than 1,500 people demonstrated in the streets of Almaty in support of Ukraine and peace. According to OpenDemocracy, there is a clear generational gap among Kazakhs as older generations keep a more pro-Russian stance while younger ones, mainly people under 40, perceive the war as a source of instability and threat.

One of the main issues is represented by the fact that during the riots that broke out in the country in January this year, Russia supported Kazakhstan by sending troops. Now the Kremlin expects Nur-Sultan to act accordingly.

Nevertheless, Tokayev seems to be adopting a different approach than that of his predecessor. Accordingly, while trying to keep a neutral stance on the conflict, he seems not to be afraid to criticize Russia’s intervention in Ukraine by appealing to international law principles and avoiding recognizing the independence of the two republics of Donetsk and Luhansk.

The Kremlin seems not to appreciate this quasi-neutral stance. The recent obstacles created for the Kazakh economy are a clear sign of this disappointment. For instance, in July, Russia, citing supposed environmental problems, closed the Russian section of the Kazakh pipeline, CPC. Although the pipeline was ultimately reopened, fears of a future similar behavior remain yet, which reminds what is currently going on in Europe with the North Stream 1. In this light, the recent decision to sell part of the Kazakh crude oil to Europe through Azerbaijan can be interpreted as a clear attempt to bypass Russia.

Moreover, the robust discourse that the Kremlin constantly brings forward about the protection of Russians living abroad, enshrined in the idea of the Russian world (Russkiy mir), should not be underestimated.

Accordingly, having a powerful and military-active neighbor is not easy to handle. This becomes even more difficult when your country hosts a considerable minority that, in the case of Kazakhstan, amounts to 20% of the total population. It is not difficult, therefore, to see some parallels with Ukraine. These can be based not on geography and population composition but also on the similar propagandistic tones used by several Russian politicians.

Undoubtedly, the war in Ukraine is exacerbating latent situations. Kazakhstan is walking on a tight rope as it is currently trying to establish itself as a full-fledged independent country by reducing Moscow’s influence. Not an easy task when your powerful neighbor is ready for everything.

Of course, for those countries like Kazakhstan that are trying to distance themselves from this constant looming threat, this can also be a good opportunity. As Russia is now busy on the Ukrainian front and taking care of other ongoing situations, like the peacekeeping mission in the Karabakh region, its military capabilities should be, at least in theory, considerably reduced. This, maybe, can also explain Kazakhstan’s boldness. The hope is that the country will not be turned into another Ukraine because then another question will arise: will the Western world back Kazakhstan as it is currently backing Ukraine? And if so, to what extent and with what justification? Time will show.