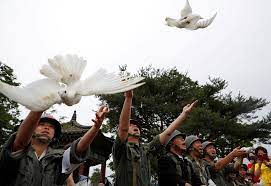 As we all know, South and North Korea have been at odds for a long time, but at a joint press conference with Australian Prime Minister Scott Morrison in Canberra earlier this week, South Korean President Moon Jae-in announced that North Korea, South Korea, the United States, and China had agreed in principle to end the Korean War, which began in 1950.

A bit of the war’s history

The Korean War lasted from 1950 to 1953, with hostilities ending in July 1953 thanks to the Armistice Agreement. Since then, North and South Korea have been technically at odds. It all started at the close of World War II, when the US and the Soviet Union liberated Korea, which was then a single country, from Japanese control. The country was then divided into two occupation zones, one in the north and one in the south.

While US-backed South Korea became a republic, Soviet forces erected a communist regime commanded by Kim Il Sung, North Korea's current Supreme Leader Kim Jong Un’s grandfather. The two countries were separated and the boundary was known as the 38th parallel. After this, North Korean soldiers, supported by the Soviet Union and communist China, broke across the 38th parallel into South Korean territory on June 25, 1950, intending to reunite the Korean Peninsula. The invasion spurred the United Nations to call on its member countries to deploy soldiers to stem the tide of violence. North Korean soldiers were beaten back by American troops who joined the South Koreans.

On July 27, 1953, the Korean Armistice Agreement was signed, seemingly putting an end to the combat between the two sides. The Korean War cost the lives of almost five million combatants and civilians from both sides. A Korean Demilitarized Zone (DMZ) was formed as part of the armistice agreement to split South and North Korea and ease the repatriation of captives. There was, however, no peace treaty signed at the time. The armistice simply established rules for the cessation of open hostilities, a four-kilometer demilitarised zone, and a system for the transfer of prisoners of war. The Korean War technically continued due to the lack of a peace treaty between the two fighting countries. Despite the armistice agreement, both nations' borders remained one of the world's most militarised zones, and tensions between the two neighbors erupted on multiple occasions.

End of the war declaration with the Australian Prime Minister

During a joint news conference with Australian Prime Minister Scott Morrison, Moon said Australia has also backed the Korean government's request for an end-of-war declaration. The United States, China, the Republic of Korea, and North Korea have also signed on. Moon also believes that the declaration should establish a peace regime on the Korean Peninsula and terminate the very shaky armistice, emphasizing the importance of resuming discussions between North and USA, as well as the South and North Korea.

Morrison and Moon also agreed to expand their official relations to a comprehensive strategic alliance between their countries. Moon is the first foreign leader to visit Australia since the epidemic began, signing a 1 billion Australian dollar ($720 million) defense agreement. Hanwha, a South Korean defense business, will supply the Australian army with artillery weaponry, supply trucks, and radars under the terms of the agreement which is Australia's largest defense deal with an Asian country.

Certain countries have agreed to end the Korean War. Moon believes that the conflict will aid stalled discussions between South and North Korea, as well as North Korea and the United States. However, despite several attempts, no peace agreement has been reached between the two parties, and hence the fight technically continues.