The Violence And Torture Under Colonial Rule In India. 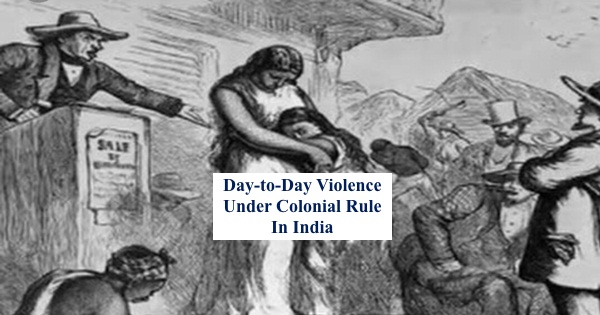 The Historiography of torture and brutality in Colonial India reflects mostly an elite perceptive. The primary source was either manipulated or fabricated by the British administration. The account "from the below" exhibits events of violence and torture under colonial India as an everyday act. The events of disrespecting a coloured dead body based on a mere suspect revealed the atrocity of violence engaged in day-to-day life.

The rule of law is a crucial part of administering states subjects for Britain.  Colonial rule in India desired to govern its subject through the rule of law. The rule of law manifested itself in Britain, and in jurist Albert Venn Dicey's book called “The Law of the Constitution”. In this volume, he elaborates the concept and recognises principles while establishing the rule of law. According to Albert Venn Dicey, 'rule of law' originally meant that “No man is punishable except for a Distinct breach of Law”.  It was instituted in the conventional judicial custom before the common bench. It states that each individual is governed by the equivalent law and set of rules. The regulations should not be arbitrary or unjust.

The study on colonial violence conducted in British India demonstrates that the transplant design of the Colonial Administration failed at the roots of the 'rule of law'. It was inevitable for violence to transpire in Colonial India due to the failure of governmentality. This article will elaborate on the illegality in British governmentality. It will explore the micro-narrative of violence and torture in Colonial India through Jonathan Saha’s: "Histories of Everyday Violence In British India" and Anupama Rao’s: "Problems Of Violence, States Of Terror: Torture In Colonial India".

The accounts of violence under colonial India are enormous, where brutality being part of the grand or macro narrative. For illustration, the violence in the Jallianwala Bagh Massacre, Revolt of 1857, etc. Despite Britain's concept of the 'Rule of law', they violated the jurisdictions through an arbitrary form of administration. The colonial Rule of difference was an essential core of regulation in colonies. The rule of difference discriminated against the subject of the colonial State. The difference was based on their race. Jonathan Saha specifies that "a body is colour-disrespected even after its death". The discourse around violence under colonial India is restricted to grand events.

The violence committed under Colonial Rule in India was not just limited to the British Administration from Europe. The violence was committed by the non-official European and native officials of India. The torture committed by the elites from Europe, and India was a grave consequence of the Revolt 1857 in colonial India. Most of the facts documented by the British administration were composed to uphold the 'Imperial image'. In 1830, William Sleeman was the head of the department of the anti-thuggee campaign.

Sleeman admitted fabricating the theory to gain a desirable position in the East India Company. Such an incident provides an illustration where records fabrication was possible. For example, the penal system exercised in British India was unjust. In a manner that Indian natives were tortured, in a coarse way. The colonial forms of government were crushing the idea of oriental despotism of Edward Said and British prestige of 'Rule of law' into Barbarism.

Michel Foucault coins the term as a “governmentality” which describes forms concerning arts of government. It is composed of a method where the designated conducts for individuals or groups where the state-directed. Anupama Rao addresses the revolution of scientific development. It proves that the human body can be a piece of evidence. Rao criticises the British administration for not acknowledging the native official for processing an interrogation. Rao elaborates on the British Administration system on not guiding the natives officially to investigate crime scientifically.

Upon guidance, the possibility of reduction of violence in British colonialism. The British Officials were the reason behind the direct violence occurring to the subjects indirectly. The British penal system was illegible in a way that further violated the integrity of a victim in a crime. For example, ‘dacoity was bad enough, but the subsequent police inquiry was worse.’ Even the British institutions like magistrates and police would violate the laws of the British Administration. For example, Magistrates usually would have a problem communicating with the victims.

In most cases would make the police act in 'a de facto'. It determines the decision of the victim being guilty or not guilty. However, such an incident proves that the British Administration failed to implement the 'Rule of law' in India. The insufficiency of the British legal system turned out to be illegal, and in a manner that the native of British India became the victim of everyday violence and torture.

To conclude, the history of torture and brutality in British India fixated into a grand narrative like the Revolt of 1857, the Jalliwalla Bagh, etc. But, the micro-narratives are not elaborated extensively like the awe-inspiring event. However, these micro-narrative tortures daily were horrific. The British Rule can be observed as an insufficiency that turned out to be illegible in British India. The British obsession with forms of governmentality stirred them to violent principles.

Image Source: myIndiamyGlory Atrocities on Indian Women and India by British During Their Rule.