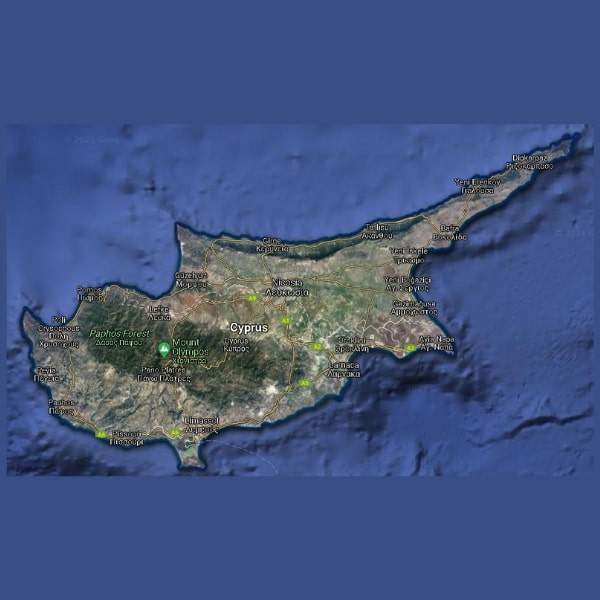 Cyprus, this name may not ring bells in many Indians’ minds but this small island nation located in the Mediterranean has enormous implications in world politics because of its strategic location. In the past various people groups have had eyes on the island from Greeks and Romans to Arabs and Turks. From 1571 to 1878 Cyprus remained under Ottoman Empire. This was a time of relative peace. In 1878 the British took control of the island and annexed it officially in 1914. Cyprus remained under British rule until 1960. During British rule, people started revolting and demanded freedom. The process leading up to Cyprus’s independence was far from peaceful.

The people of Cyprus are a mix of Greek and Turkish Cypriots. The majority of Greek Cypriots sought the abolition of British authority and unification with Greece, known as Enosis. Archbishop Makarios of the Cyprus Orthodox Church and Colonel George Grivas, Head of Ethniki Organosis Kuprion Agoniston (EOKA) - National Organization of Cypriot Fighters, spearheaded the Enosis crusade in 1955. They planned to accomplish Enosis by targeting government and military institutions and individuals, as well as mobilising civilians to protest the British occupation. While on the other hand, the Turkish Cypriots wanted Cyprus to be divided between Greece and Turkey, terming this partition as Taksim.

EOKA began its offensive on April 1, 1955, with a spate of bombing assaults on government facilities in Nicosia, the island's capital. No one was killed in the initial onslaught, but EOKA launched an assassination operation aiming mostly at Greek police officers and anyone who opposed the Enosis doctrine. Lord Harding, the governor of the island, proclaimed a state of emergency in November 1955. The British government began the search for a political solution. Makarios was banished to Seychelles in March 1956, but the emergency remained. Large numbers of British troops came and launched a series of offensives against the EOKA, based on the Troodos Mountains.

Cyprus became a democratic state in August 1960, but the following decades were marred by violence between the Greek and Turkish communities. In 1974, a Greek military coup aiming at unifying the island with mainland Greece resulted in a Turkish invasion and the country's partition into Turkish Northern Cyprus and the Greek Cypriot Republic of Cyprus. The island is still partitioned today.

Intercommunal Greek-Turkish violence in Cyprus was a consistent occurrence during the 1950s-70s, and the constitution of Cyprus, approved by the Zurich agreement between Turkey, Greece and the UK, did not bring peace to the island. In 1963 the violence resulted in the death of 364 Turkish and 174 Greek Cypriots. On top of that, the violence destroyed 109 Turkish Cypriot or mixed villages and displaced about 25,000-30,000 Turkish Cypriots.

Turkey during the violence was on the brink of invading Cyprus to protect the Turkish population. However, a US diplomatic intervention and direct talks between Turkey and Greece calmed tensions down a little bit.

A decade later in 1974 Greek Cypriots under Makarios’s leadership cooled down the necessity of Enosis. But, Greece at that time was ruled by a military junta and they promoted Enosis and cooperated with local pro-Enosis forces such as EOKA. So, that very year Makarios government was overthrown by Cypriot National Guard elements, led by Greek officials. A vehemently pro-Enosis, anti-Turkish member of EOKA, Nikos Sampson was declared the president.

Turkey, in response, issued a list of demands to Greece via the US negotiator. These demands included: Removal of Nikos Sampson with immediate effect, withdrawal of 650 Greek officers from the Cypriot National Guard, the admission of Turkish troops to protect their population, equal rights for both diasporas, access to the sea from the northern coast for Turkish Cypriots and Britain to ensure the neutrality of Cyprus as one the guarantor.

Britain refused and Turkey started planning an invasion of Cyprus.

The total Turkish population of Cyprus during that time was 117,000, mainly living in the enclave in Nicosia in the north, Famagusta in the east, Larnaca in the south-east and in Limassol in the south. Their position facilitated the capture of the strategically located Nicosia-Kyrenia highway, making communication for the Greek Cypriots a lot more difficult.

The Turkish Cypriots had a standing army of 10-17 thousand troops and could mobilize up to 20,000 men. The primary force of Greek Cypriots on the island was the National Guard, which was led by Greek commanders and had a standing army of 12,000 soldiers and 32,000 tanks. They could also mobilize an additional 40,000 men. The Greek Cypriots had organisations such as EOKA, which had approximately 5,000 men, and the elite Greek regiment Hellenic (Greek) Force in Cyprus, also known as ELDYK, which had around 1,200 people.

The Turkish army's plan of attack, codenamed Atilla-1, called for landing in Kyrenia and securing territory including the Turkish enclave near Nicosia Gönyeli. That would be a show of force, and they would hope to achieve a diplomatic settlement from there. However, if a diplomatic solution is not reached, the Turks will press on to capture the northern part of Cyprus up until Famagusta in the northeast.

The Turks regarded themselves to be the dominant force in the Mediterranean, both in air and at sea. The amphibious forces would be carried by a naval armada of 5 destroyers and 31 landing craft. The air force would drop paratroopers, supplies, and provide overall air support for the operation. During the Cyprus crisis, Turkey dispatched about 40,000 troops and 180 tanks.

The Greek Cypriots were not taking a breather either. They developed a strategy as soon as they acquired word of Turkey's invasion. Their goal was to prevent Turkish soldiers from gaining access to these enclaves. They named this operation the "Aphrodite Plan".

Turkish Forces On The Shores

On July 20, 1974, 3,000 troops and twelve M47 tanks, including the "Cakmak" Special Strike Force landing brigade, one battalion of the 6th Amphibious Regiment, one battalion of the 50th Infantry Regiment, and one company of the 39th Divisional Tank Battalion, landed unopposed in Pentemilli, just a few miles away from the main port of Kyrenia.

The 251st Infantry Battalion attempted to mount a resistance, aided by five T-34 tanks. The Turks repulsed the onslaught, damaged all five tanks, and moved farther into the territory. Shortly afterwards, units from several regiments of Greek Cypriots managed to compel the Turks to retreat for a brief period. However, the Turkish 50th infantry unit ultimately reclaimed the lost ground and forced the Greeks to dig in.

Meanwhile, in Nicosia, near the Turkish enclave Gönyeli, a landing by Turkish paratroopers proved disastrous, with 90 out of 120 men dying. With 550 soldiers and 20 tanks, the Greek ELDYK army began a siege on Gönyeli. This was a key location on the Kyrenia-Nicosia road that connected the north with the centre. The Turks, on the other hand, were well prepared for the siege. The area was extensively reinforced with anti-tank fortifications. They successfully resisted early Greek attacks, which were followed by a counter-attack that caused significant damage to the Greek Cypriots. Greek Cypriot forces launched an operation against numerous additional Turkish enclaves, with limited success.

On the same day, the United Nations Security Council (UNSC) adopted resolution 353, demanding all foreign military personnel to leave Cyprus, and calling on Britain, Greece and Turkey to start negotiations to restore peace on the island.

The Greek military junta quickly concluded that the Greek Cypriot troops were insufficient to fight the Turks. As reinforcements, the 537th Infantry battalion, a tank battalion, and 500 Cypriot volunteers were dispatched. The Greeks took over all Turkish enclaves in Limassol and Larnaka on July 21st. Thousands of Turks were captured as POWs. Many other Turkish enclaves on the island were also targeted.

On the 22nd, the second wave of Turkish soldiers arrived on Cyprus's coasts, driving the Greeks back and recovering the lost territory. The early losses of Greek Cypriots resulted in the collapse of Greece's military junta on July 23rd. Britain tried to restore peace on the island by conducting negotiations between Greece and Turkey on the 25th of July. These talks went on till April 14th, but they proved to be unsuccessful.

Two additional infantry divisions were sent to Cyprus. Greek Cypriots established their fortifications along the Troodos Line, which allowed Turkish soldiers to access around 40% of the island. With a larger force, Turkish soldiers broke through Greek Cypriot defences, forcing them to retreat to Famagusta. However, in the central sector, the Turks were met with significant resistance, and their advance was limited.

Turkish forces wreaked havoc on Greek forces on August 15th, compelling them to retreat. By the end of the day, Turkish soldiers controlled the bulk of northern Cyprus, accounting for 40% of the island's total landmass. Hence, the objective of Atilla-2 was achieved.

The island was divided by the so-called Green line. Around 160,000 Greek refugees fled to Greek-controlled areas of Cyprus, while Turkish refugees fled to Turkish-controlled areas. During the conflict, the Turks lost around 3,500 soldiers, while the Greeks lost 6,000 men. Subsequently, the Turks declared the Turkish Republic of Northern Cyprus, which is still not recognised by the international community.

Despite repeated attempts to achieve an agreement, Cyprus remains divided to this day. In April of this year, UN-led discussions attempted to restart negotiations to reunify Cyprus but failed. The President of the Republic of Cyprus, Nicos Anastasiades, began discussions with Turkish Cypriot leader Mustafa Akinci on the island's reunification in 2015, but these were also unsuccessful. In August of this year, Ersin Tatar, the President of Northern Cyprus, spoke out against the Greek Cypriot government's intention to revoke the passports of prominent Turkish Cypriot officials. He termed the action as an "attack on the attempts to reach an agreement."

Tatar, like many other Turkish Cypriots born after the island's independence from Britain, has a Cyprus passport but refuses to acknowledge the state south of the Green Line. The decision by the Greek-controlled government to revoke the passports of top Turkish Cypriot officials was regarded as a reaction to Tatar's statement a month earlier that his administration would proceed with preparations to open a portion of Varosha, which used to be a bustling tourist hotspot prior to the Turkish invasion of Cyprus.

The international community and the United Nations appears to be refocusing their attention on Cyprus. Meanwhile, the island remains in diplomatic limbo, awaiting a resolution.

7 months, 3 weeks ago by thetravelvine

Wow, I had no idea that Cyprus was split in two! That's crazy! I hope a resolution is found and the country can live in peace. Thanks so much for the education :)