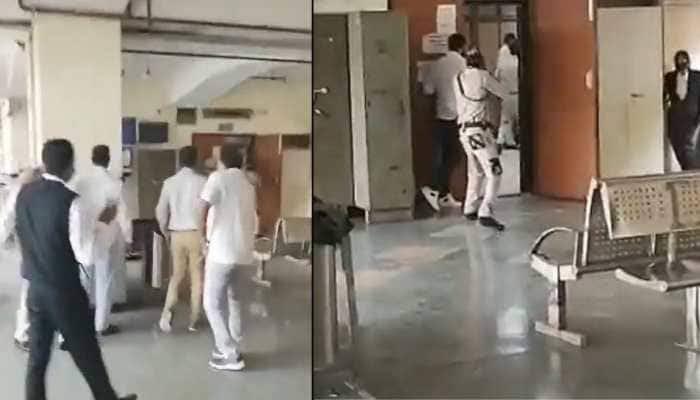 Let us tell you what happened that day?

On Friday, in broad daylight, something very shocking happened inside Rohini Courtroom number 206. In line with this, two assailants entered the courtroom in lawyer's uniforms. The attackers belonged to the Tillu Tajpuria gang. They came to shot Gangster Jitender Maan alias Gogi. Gogi is one of the most dangerous criminals.

With a 10-member team of the Third Battalion of Delhi Armed Police, firing was done on them by the two assailants. Other than Gogi, 3 others were shot dead during the shootout. Right at the moment the military forces from the counterintelligence team got active and fired at the assailants during the shootout. It’s believed that there was rivalry between the 2 criminal gangs.

Many witnesses told the media portals that the Judge and court staff were also present during the horrific incident. Several videos went viral on social media. During which lawyers were rushing out of the building to save their lives. Sounds of gunshots were heard within the videos. Around 35-40 rounds were fired during the incident.

According to the FIR, additional sessions judge Gagandeep Singh was engaged in court proceedings and therefore the court staff and around 5-6 advocates were inside the area when suddenly two men, dressed as lawyers stood up and whipped out their pistols to begin firing.

Keeping in mind the protection and security of everyone, Singh and his commandos — constables Shakti and Chirag — immediately opened fire at the two men.

The Delhi Police Crime Branch has confiscated the case for an intensive investigation. According to sources, it is believed that Tillu Tajpuriya, who is currently in jail ordered Umang Yadav to try to do a shootout in Rohini court. The Delhi crime branch is doing a deep investigation on the matter. The safety and security of people come into sharp focus after the incident to ensure safety within the court premises.

What do the police find out in a deep investigation?

On Sunday, Umang and Vinay supported footage captured in the CCTV near Gate No. 4 of the Rohini court were arrested by The Delhi Police. Both of them were in reference to the horrifying incident that happened in the Rohini courtroom. All the four criminals firstly met at a mall before leaving for the court.

According to police officials, the shootout was planned by the four assailants. The two assailants who were watching for them have now been held in police custody.

During interrogation, accused Umang has told that he was also present at the court on Friday, wearing a lawyer’s attire to assist the 2 shooters. He said that Gogi’s rival, Sunil Tajpuria, had asked him to help the two shooters in an exceeding task. On 20th September they had a meeting at a flat. Then they visited a mall in Rohini to alter into the lawyer’s attire.

Umang was purported to wait outside the court in the exceeding car as an "escape plan". Three others went inside the courtroom to kill the Gangster Gogi. However the plan failed, Umang ran away alone in the car.

Member of gangster Gogi's criminal team said that they had witnessed one among Sunil Tajpuria's henchmen, a gym trainer, who was waiting outside the court area with the getaway vehicle to assist the shooters to flee and to take revenge.

The policemen had noticed a strange vehicle during the investigation of the camera footage outside the court. Crime Branch officials visited the crime scene on Saturday and are visiting to interrogate gangsters Sunil Tajpuria, alias Tillu, Sunil Rathi, Naveen Bali, and Neeraj Bawana.

The police officials confessed that several innocent people could have also lost their lives if there was no immediate action taken by the armed police.

On Saturday, Rakesh Sehrawat, the chairman of the Bar Council of Delhi (BCD), held a gathering with Delhi commissioner Rakesh Asthana. He discovered security shortfalls inside the Rohini court.

A plea was sent to Delhi supreme court requesting to take measures for the protection and safety of people in the district courts.