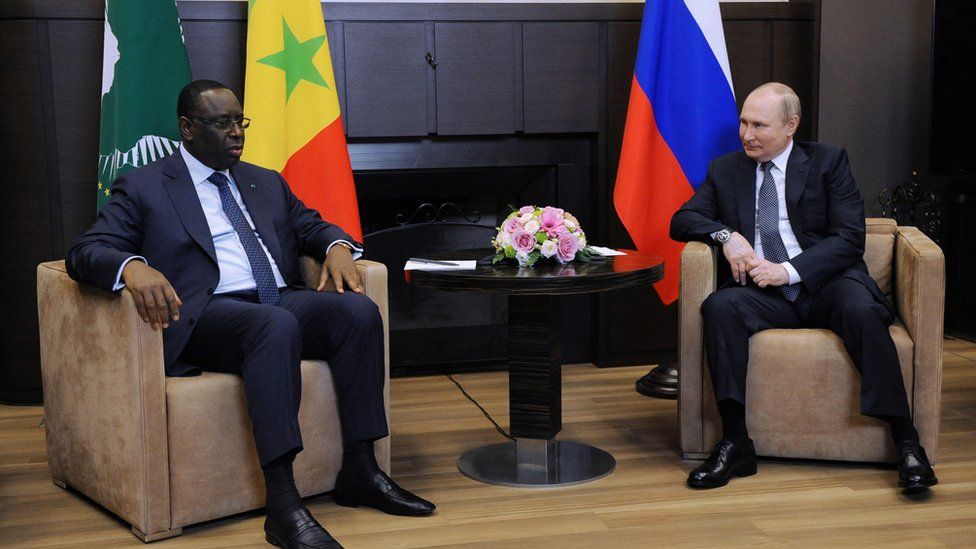 On Monday, Ukrainian President Volodymyr Zelensky addressed a speech to the African Union (AU), declaring that as long as Russia goes on with its colonial invasion of Ukraine, the food crisis will persist. To mobilize the African countries, he characterized the continent as a hostage to the Russian invasion, which caused grain and fertilizer shortages. This is pushing millions of people to the verge of starvation.

The AU's chairperson, Macky Sall, replied by thanking the Ukrainian President via Twitter. Mr Sall’s statement, though, confirms that Africa will stick to international law, the rules of free commerce, and the pacific resolution of the conflict. The AU’s chairman was hosted by Russian President Vladimir Putin on June 3rd in Sochi, Russia. He was reassured by Mr Putin’s awareness of the difficult position many African countries have found themselves in because of the sanctions. Mr Sall stressed the importance of cooperating, particularly in what concerns food, grain, and fertilizers. The Russian President, despite avoiding mentioning the grain supplies, confirmed that the country was always on the side of Africa.

Many African countries rely heavily on Russia and Ukraine to import goods like wheat and sunflower seeds. Due to the war and the sanctions imposed, prices have soared, causing supply chain disruptions throughout the continent. This is compounded by the fact that over the past ten years, the demand for cereal crops has skyrocketed in Africa. For instance, between 2007 and 2019, the total percentage of wheat imported amounted to 68%. The African countries involved in economic activities with Russia and Ukraine are mainly Algeria, Egypt, Libya, Morocco, Tunisia, Nigeria, and Ethiopia.

Oil prices are another problem, as Africa is also a major importer of Russian oil. Recently, South African officials have openly discussed purchasing Russian oil to help relieve the country's unprecedented fuel costs, a decision that would help Moscow circumvent Western sanctions imposed after the invasion of Ukraine.

The 20% to 40% increase in oil and gas prices has impacted consumers, producers, and farmers because of the cost of fertilizers. This will increase the risk of a major debt crisis as the government's overall revenues are decreasing while there is an increased demand for governmental funds. This also concerns those countries considered more stable, like Ghana. These difficulties were highlighted during a meeting between IMF Managing Director Kristalina Georgieva, the United Nations Economic Commission for Africa (UNECA), and African Finance Ministers and Central Bank Governors. This new crisis came right after the COVID-19 pandemics that had already put a strain on the global and African economies and had just begun to recover.

When it comes to the Russian-Ukrainian conflict, many Africans are adamant that they must remain neutral. They claim that this is not an African issue and that Western democracies are hypocritical in justifying their invasions, such as those in Iraq while criticizing Russia's in Ukraine. They further question why the hardship of Ukrainians should be prioritized over that of Ethiopians, to whom the west has given no attention. This neutral stance was reflected in the United Nations General Assembly‘s resolution to stop Russian military operations in Ukraine in early March.

Many African countries are very close to Russia, and the conflict in Ukraine could have strong repercussions on the continent's security. Some sources seem to confirm that Russia has military cooperation agreements in place with at least 20 African countries.

The Wagner Group is a case in point. This notorious Russian private security group of private military contractors was involved in several human rights breaches in the Central African Republic with the alleged collaboration of powerful Russian oligarchs. The company is rapidly expanding its footprint across Africa. The group drew the attention of several media when Mali’s transitional military government signed a deal in September 2021 for the provision of 1,000 Russian fighters and military instructors. This operation, denied by the Russian government, would cost $10.8 million a month.

Moreover, the Russian presence in Africa is particularly felt in the oil sector as well. This year, four Russian oil corporations were involved in various onshore and offshore areas in many African markets. Russia is one of the main operators in North Africa (Libya, Algeria, and Tunisia) and a partner in Sub-Saharan Africa (Ghana, Nigeria, Cameroon, Congo, and Mozambique). Lukoil is one of the major players in the Gulf of Guinea sub-region. Gazprom and Tatneft run significant operations in North Africa, while Rosneftegaz is the only Russian oil corporation with operations in East Africa.

The ongoing conflict risks putting these operations to a halt as investment decisions and development projects may be delayed because of possible sanctions against Lukoil. This has already happened for ongoing projects in Cameroon and Ghana, with negative impacts on the economies of these countries.

Nevertheless, some believe that the conflict could be a good opportunity for African economies. As the European Union gradually moves away from Russian fossil fuels, Africa's abundance of these resources may enable it to compete. The executive chairman of the African Energy Chamber, N.J. Ayuk noticed that after years of attempts to establish a connection between Europe and Africa in the fossil fuels sector, the situation is now gradually changing.

Notwithstanding the EU’s concerns about climate protection and the shift towards zero emissions, the recent decisions about phasing out its dependency on Russian fossil fuels by 2027 are changing the EU’s approach towards Africa.

The EU is looking at Africa's potential for green hydrogen production, which is hydrogen produced using renewable energy sources. Countries like Germany have long recognized the impossibility of producing the necessary amounts of green hydrogen to meet their zero-emissions targets on their own.

The main problem to be overcome, though, is the lack of adequate gas and oil facilities. This will require massive investments from the European countries to improve pipelines, storage capacity, and processing facilities to be able to cooperate successfully with the African countries and meet their gas needs. Accordingly, the EU has already begun investing in infrastructure and African capacity-building projects to lay the groundwork for successful import deals with African suppliers.
This general tendency reveals the paradox of the EU’s energy policies. For years, the European governments and financial institutions have exerted strong pressure on Africa to switch to green energy. European interventionism went as far as interfering with international investments in major African natural gas projects. This happened particularly during the United Nations Climate Change Conference (COP26) in Glasgow in 2021.

It seems, therefore, that the war in Ukraine has unveiled the ephemeral nature of the EU’s noble climate-saving intentions. As the EU’s energy survival is at stake, an approach based on realism and pragmatism is now considered the number one priority.