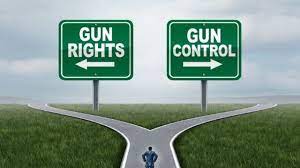 Last month, the US Supreme Court upheld the constitutionality of citizens’ rights to carry guns in public as a self-defence. The controversial decision guaranteed an unprecedented victory for firearms advocates amid nationwide division over recurrent mass shootings in the country.

The court verdict, motivated by a majority vote of conservative justices invalidated the New York state's limits on carrying concealed handguns outside the home, saying that the 1913 gun legislation comes in violation of the US Constitution’s Second Amendment.

The 6-3 ruling, with the conservative justices in the majority and liberal justices in dissent, is expected to impede state and local efforts to impose firearms restrictions.

According to Reuters, Justice Clarence Thomas who authored the recent ruling said in this regard:” We know of no other constitutional right that an individual may exercise only after demonstrating to government officers some special need.”

In a society with rocketing rates of gun violence that led to several mass shooting incidents that shocked the world, many Americans still cherish their gun rights. Thus, the right to acquire guns in the United States is still a thorny topic to discuss.

Accordingly, recent gun attacks that took place in the United States have led weeks ago to the death of 10 people (on May 14) at a grocery store in Buffalo, New York, and 19 children and two instructors (on May 24) at an elementary school in Uvalde, Texas.

The liberals are not Happy

President Joe Biden, who referred to gun violence as “a national embarrassment”, expressed his overwhelming dissatisfaction with the Supreme Court’s move in the direction of deepening the rift between gun rights advocates and their opponents.

Reuters reported the US president as saying that” this ruling contradicts both common sense and the Constitution, and should deeply trouble us all. In the wake of the horrific attacks in Buffalo and Uvalde, as well as the daily acts of gun violence that do not make national headlines, we must do more as a society - not less - to protect our fellow Americans."

Liberal Justice Stephen Breyer, who strongly disapproves of the court decision, said that this uncalculated move will reaffirm gun rights with no consideration whatsoever to the magnitude of the issue of firearms misuse in a country where people can buy guns from the stores without the least of control standards.

Reuters stated that the court ruling issued on Thursday highlights the conservative justices’ inclination to go soft on gun-related legislations in a way that may be read as favouring the interests of firearms lobbies over the safety of Americans who suffer daily from gun violence.

On the other hand, the disputed ruling issued by Justice Thomas stands for the Supreme Court’s most crucial contribution to the dilemma of gun rights in the country, after recognizing for the first time in  2008 an individual's right to keep guns at home for self-defence in a District of Columbia case.