After Strip Search Scandal, Why Are We Demanding Reform ? 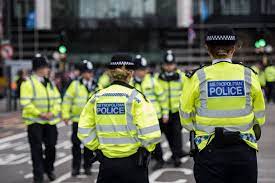 After a damning report into the number of teenage Londoners strip searched by the Metropolitain Police; 650 children were strip searched in London, 95% boys, and in 2018 75% were Black boys, a question occurred to me again, about why are we are once more demanding reform of inherently unjust practices. For many, the idea of strip-searching children is abhorrent, for me, given the fact that the overwhelming majority of strip searches of both adults and children find nothing, negate any positives this deeply traumatic and intrusive police power way wield.

Despite the denial of institutional racism from senior officers, the evidence is indisputable.

Sarah Everard’s brutal kidnapp, rape and murder by serving met officer Wayne Couzens, shattered a lot of women's confidence in the police, despite, the fact that many communities' relationship with law enforcement was never whole to begin with. Deeper conservations about what policing is, and who it is for have begun to be asked.

Professor Angela Davis asks us when we will come off a treadmill of reform? The inability to stop the endless cycle of incremental change around the justice system, and yet the same problem persists. The cycle of police abuse of power, promises of change, only for the same problem to occur a few months down the line. After Child Q, which sparked the report, there was Child X and a child anonymised as ‘Olivia’.

A police force with a documented history of racism, sexism, misogyny, homophobia promises change that never materialises. There is something to be said, about the inability to stop an endless cycle of reform, yet still left demanding reform. As of 2022, there have been over 1800 deaths in police custody, disproportionately Black and Brown Brits who are restarint and killed, even when unlawful killing verdicts are reached, no police officer(s) (prior to Everard’s murder) have ever been prosecuted since 1969, for either manslaughter or murder, the vexed issue of stop and search persists and persists, with it being at its highest since over 1 million people were stopped and searched in the Capital in 2011, with over a quarter done unlawfully by the Met police.

Over 2000 police officers have been found guilty for sexual offences, with 52% keeping their jobs, officers unlawfully strip-searching women and (Black) children, toxic WhatsApp group chats containing vile messages of sexism, misogyny, racism and homophobia with officers declaring he would ‘happily rape’ a female colleague, multiple officers charged and found guilty for predatory behaviour towards female officers and officers found to be the perpetrators of domestic violence, are less likely to be arrested, charged, prosecuted and convicted than the general public.

For many middle-class White Brits, Sarah Everard’s brutal murder at the hands of a serving police officer, was a moment where many questioned their ability to trust the police. A comforting argument from White British Liberals that often depict police brutality as purely an American problem, is the problem in and of itself. It is sometimes easier to fight injustices when the happen over the pond, as a way to deflect from the pain and trauma of police brutality in the U.K., but I say no longer. Say Their Names; Sean Rigg, Leon Briggs, Dalian Atkinson, Rashan Charles, Smiley Culture, Mikey Powell, Kingsley Purell, Kevin Clarke, Seni Lewis, Sarah Reed.

Sir Robert Mark the former commissioner of the Met police once said, 'the police are the anvil on which society beats out the problems and abrasions of social inequality, racial prejudice, weak laws and ineffective legislation’ yet the anvil is weak and the public are tired.

After a decade of austerity, that has resulted in youth clubs being closed, poor schools, mental health support, lack of youth workers and adult support networks, closed sure starts and maintenance support for all Brits, more punitive approaches to justice system are champion to compensate for social equity. Abolitionism or minimalism, is about being hopeful about the prefigurative moments of our world, that suggests a new future is possible beyond the carceral apparatus.

The question no longer remains of how to reform the police, but rather a question about what does real public safety look like beyond this institution? Norwegian Sociologist Nils Christie tells us that we should ‘abolish institutes, not open them’ we should be striving for some form of minimalism of the criminal legal system, rather than trying to reform inherently oppressive systems, in the hope it they can change and serve marginal communities, which in reality contribute to their marginality.

The justice system is often defended in the belief that it provides security for the least of us, but in reality, disenfranchised and racialised communities remain the most vulnerable to violence, the least protected and report the least amount of trust in the police, specifically for Black Brits, despite the most oppressively policed.

A path towards transformative justice, recognises the fallacy of reform. Historian John Moore questions the ability to reform inherently brutal and racist institutions; the British criminal legal system is one that is a direct ancestor of the Transatlantic slave trade and the brutalities of the Empire, therefore the gross over representation of racialised minoritised Britons should not be seen as a cog, in an otherwise good system, but rather a continuation of the Empire coming home.

It is the ship, we are the river; the brutalities of policing and the wider carceral apparatus should no longer be met with surprise or platitudes about a ‘few bad apples’ but rather provide us with the necessary blueprints for a world without police violence, cages and undoing rotten foundations to build a better future.

Abolition is therefore about presence, not absence. Sociologist Erik Wirght has called for the imagining of ‘real utopias’, that challenge our current thinking of the carceral apparatus and the way it systematically imposing harm on people, and to imagine a more optimistic conversation around crime control.

The criminal legal system cannot compensate for a basic lack of social and racial justice.

Barristers Set To Strike This Autumn.