Albert Camus and the Myth of Sisyphus: Analysis 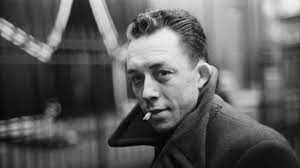 Albert Camus was a French and Algerian philosopher who published several novels and plays. His works such as The Plague, The Stranger, and The Myth of Sisyphus all highlight his main philosophical idea of the absurd. According to Camus, the conscious world that humans experience is meaningless, and the search for meaning in a meaningless world causes humans to fall into a spiraling search for reason in a universe where the absurd overshadows reason.

The focus of this article will be mostly on central topics retaining to the meaninglessness of suicide, the properties and traits of living in the absurd, and how the belief in an afterlife keeps humans from living in the moment. We will also delve into how Camus’ philosophy would answer questions such as “Who am I?” and “How do I live in this world?” as well as the other interesting theories, facts, and ideas that Camus has to offer.

Camus defines the absurd as the conflict between humans wanting meaning from the universe and the universe returning nothing but chaos. He believes that there are only a few ways to find meaning in the life of a rational, conscious human being, and that is by either leaving our hopes in the hands of God by becoming religious, or by accepting that life really does have no meaning and using that acceptance to enjoy everyday life.

While all of these are possible outcomes when living in the absurd, Camus specifically prefers the second outcome: to accept the meaninglessness of the world and live with it contently. This is because the other choices, including accepting religion, according to Camus, is philosophical suicide. He thinks that the belief in an afterlife keeps humans from truly living in the moment. Living for some higher power that exists outside of yourself will keep you from finding your true passion. A person who is religious will never be truly free, furthermore they are constrained to the rules of their organized religion. Due to this, Camus comes to this conclusion to accept the absurd by deducing the choices humans make when they realize they live in this world. He asks humans if it is worth to live in a universe with no meaning, and if it is not, wouldn’t the only answer be suicide?

Living in the absurd creates so much angst because humans are forced to make their own lives meaningful without guidance of a higher power or anything else, so would committing suicide be better? Camus answers with a firm no. He expresses that suicide is even more meaningless than living in a world without meaning, because facing the absurd and struggling with it is what allows humans to live life to the fullest. Just by simply waking up, enjoying a cup of coffee in the morning, watching the beautiful sunset, and sharing a laugh with friends are all more meaningful than just ending it. Getting up and doing whatever one wants to do is how Camus says humans should live in this world.

Now that we have analyzed Camus’ main philosophy, we must break down how he explains humans should come to the conclusion to live with the absurd rather than ending their lives. This is because humans are rational beings, so deciding to simply live with the absurd is a difficult mindset to develop; one usually doesn’t simply wake up in the morning and decide to enjoy their day without practicing their mental state. This brings us to the three properties and traits of living in the absurd. Let’s use one of Camus’ most important quotes to analyze the three traits of the absurd. In the Myth of Sisyphus, Camus states, “Thus I draw from the absurd three consequences, which are my revolt, my freedom, and my passion. By the mere activity of consciousness I transform into a rule of life what was an invitation to death, and I refuse suicide.” Camus explains how the first step to living with the absurd is to revolt against the meaninglessness of life. Camus explains how humans tend to try to find meaning in life yet fail to do so with certainty, causing humans to become trapped in this absurd world. He says that suicide is nothing but a means to escape this, and that instead of ending their life, one should revolt against the absurd by accepting it and living with the certainty of inevitable death.

The next step in living with the absurd is the experience of freedom. Camus explains how before a person confronts the absurd, they believe that they are free because they have the ability to plan for tomorrow, such as saving for the future and anticipating later days. He says this is not true freedom, for it is undermined by the inevitability of death. A person might own a house in five years by spending their time planning for that house, but there’s always a chance that person dies before then. He explains how instead of living for future freedom, one should live for the freedom they have today.

The last trait of living with the absurd is developing the passion for living, which is the final conclusion Camus comes to. He explains how many people lie to themselves when explaining how a career is their passion, when in reality they would rather be doing something else. He says that if one seeks to revolt against the absurd, they must not simply have a passion, but live with passion. If one lives with passion all the time, they will manage to give full commitment to the present moment. With full commitment to the present moment, humans “defeat” the absurd by tolerating the anxiety and angst that comes with it and using it to fully enjoy their meaningless lives. There are many more concepts and interesting ideas in Albert Camus’ work, however these are the key ideas coming from his piece, The Myth of Sisyphus.

A Compare and Contrast of Philosophers J.P. Sartre and Soren Kierkegaard

Identity in the Globalizing World