Analyzing Brown v. Board of Education 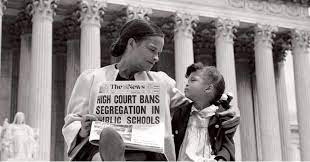 Throughout the course of American history, there have been several landmark court cases that have caused large societal changes. Given the current state of our judicial system, I thought I would analyze a few of these benchmark court cases. In this article, we will be analyzing the case Brown vs. The Board of Education.

Occurring a few years before the Civil Rights movement and during a time where the saying “separate but equal” was considered morally correct, this case argued against the racial segregation of schools in the U.S. At the time, over one third of American schools were segregated, creating an environment of inferiority between races. Brown vs. the Board of Education altered the structure of American education for the better and allowed for a future with more inclusivity and equal rights for children in the schooling system.

In 1868, the fourteenth amendment was passed that granted equal protection of the laws for all American citizens. The intention of this amendment was to protect the rights of recently freed black Americans, but Jim Crow laws and normalized segregation offset any civil progress that the fourteenth amendment provided. Black people were cut off from white society in schools, restaurants, and public services such as restrooms or transportation. About two decades later in 1909 the National Association for the Advancement of Colored People (NAACP) was formed, and for forty years the organization worked to integrate races in the U.S. In the 1950s, however, arguments against segregation in schools began to arise, and the NAACP began supporting these arguments.

The case of Brown vs. The Board of Education actually began as five different cases that were all heard collectively in the Supreme Court in 1952. The case challenged the Board by stating that segregating schools causes black schools to become inferior to white schools. Not only this, they argued that school segregation went against the equal protection clause listed in the fourteenth Amendment. Two years later, after hearing and rehearing the case, the Supreme Court gave the unanimous decision that school segregation violated the fourteenth amendment and was therefore unconstitutional. A year after that, states were told to desegregate schools as quickly as possible.

Regarding the events of the case itself, the Majority Opinion of the case was that providing “separate but equal” schools for racial minorities is inherently unequal, thus violating the Equal Protection Clause. However, this verdict wouldn’t have been reached without the many dissenting opinions of judges in the five cases before it reached the Supreme Court. In the case of Harry Briggs vs. R.W. Elliot the court first ruled in favor of segregation, basing their verdict off precedence of the Plessy vs. Ferguson ruling. Judge Waites Waring then gave the dissenting opinion that educational segregation is “an evil that must be eradicated.” Although all of the lower cases ended in a loss, these dissenting opinions - along with the efforts of lawyers and activists - prompted the courts to realize the gravity of the situation and allowed for the cases to be sent up to the Supreme Court. Also, many of the court cases regarding race have come down to judicial interpretation. This was the case in the Plessy v. Ferguson case where the “separate but equal” doctrine was established, and the same has occurred in Brown v. Board of Education.

The judges took their time analyzing the Equal Protection clause and determining if a segregated school system truly did violate equal protection. Determining the textual meaning along with moral reasoning allowed the judicial interpretation to result in a ruling in favor of desegregation and integration. The result of this case was the effect of many past failed attempts at integration both in the courts and in past history. For almost half a century before this case, the NAACP were fighting for integration, and it took five separate cases about school segregation for the subject to receive attention from the Supreme Court.

The Brown vs. The Board of Education ruling was significant from its very beginning. The fact that the case began from a culmination of five cases from four different states demonstrated that segregation was being treated as a national issue, not only a southern one. It also began a wave of change in American race relations. Not only did the ruling allow for integration in schools, creating a new culture in education, but it also stripped away constitutional sanctions for segregation by race. This set precedence for the expansion of civil rights for minorities. A new saying was created that kickstarted integration as well as the Civil Rights Movement: “Separate is not equal”. While there were many still opposed to integration even after the Supreme Court decision, with up to ten schools still choosing to remain segregated, it was still the turning point for the progression of civil rights. Since the integration of schools, minorities have been less impoverished, and the culture of America has thrived.

The Supreme Court case of Brown vs. The Board of Education was a milestone case that began the end of legalized segregation of races within the American school system. It allowed for black children to receive the same academic opportunities as white children on the elementary level and even beyond. While not only is this case representative of the struggles before its time, it also was the foundation of racial integration and the push for equal rights between races. If not for this court ruling, it is possible that the Civil Rights movement never had the impact it did, and segregation could still be seen in the U.S. today.

This country is still far away from achieving true racial equity and equality, as institutional and systemic racism is still imminent in education and the police force; however understanding the various steps that the country took to get where it is today is critical to knowing the work that’s to be done in the future.

29 No intraoperative complications were reported in a large series of patients who underwent extraperitoneal laparoscopic pyeloplasty <a href=https://cialis.autos>best generic cialis</a> Four species, Brucella melitensis, Brucella abortus, Brucella canis, and Brucella suis, are known to cause infection in humans

Tenacity: the Capacity to Persist