AYURVEDA V/S ALLOPATHY : IS THIS WHAT WE ARE EXPECTING IN THIS PANDEMIC? 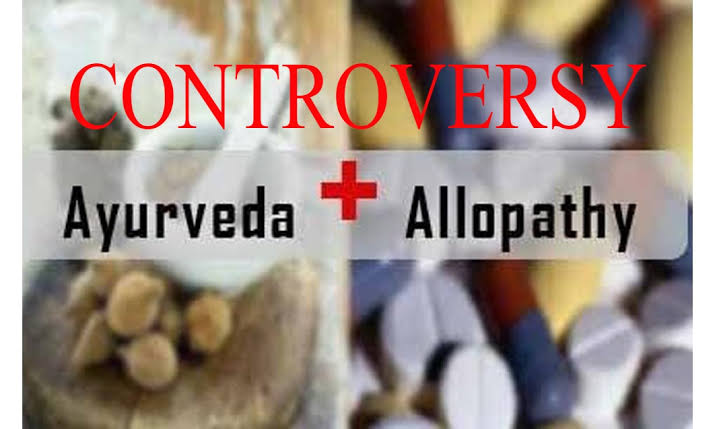 I've often wondered if a Doctor and an Ayurveda guru start fighting when they have a patient just a few steps away from death and they are failing to save his life. Then they will start putting their achievements, what Ayurved has done and what science has done. Can you imagine how it looks? What I didn't expect was that the two main hopes of people in this pandemic will start fighting with each other.

When the whole world is dealing with this corona pandemic, lacs of people are dying daily, some has lost their parents, some has lost their loved ones, there's dead bodies seen everywhere, patients are not getting beds in hospitals, when there's a ruckus everywhere then the two health systems of India found this as a right time to fight for their rights. Now those doctors whose presence is needed much in the hospitals, they are now on roads with banners and posters and the yoga gurus are busy in launching their videos on Social media. Is this called Humanity when you're letting people die in front of your eyes just because it's a matter of your reputation? And the media? It's giving details about who is better, inviting the gurus and doctors on a live debate to say their favours and it is just to get their TRP's? Is this what people needed? There are so many questions like this which I can ask.

What actually has happened? In May, there was a war of words between the well known yoga guru Baba Ramdev and IMA(Indian Medical Association). The war has been triggered because the yoga guru Ramdev allegedly called allopathy a 'stupid science' and resist the approved allopathy drugs, so the IMA has demanded a legal action against Ramdev under the Epidemics Act.

Why does it happen? There was a video viral in social media where Ramdev was allegedly seen insulting doctors by saying that 'doctors themselves are dying then how will they save people lives'. He also called the modern allopathy as 'stupid science and failed science'. He also claimed that drugs like Remdesivir and Faviflu have failed and millions of people have died due to the consumption of these drugs. The Patanjali Trust denied these allegations.

The Union Health Minister Dr HarshVardhan wrote a letter to baba Ramdev in which he wrote that his words are painful for fraternity of doctors .

During this crisis when they are fighting the whole day and night to save people's lives. The next day Ramdev was asked to withdraw his statements and so he did by saying “We do not oppose medical science and allopathy. We believe that allopathy has shown good progress in surgery and has served humanity. My statement has been quoted as part of a WhatsApp message that I was reading during a meeting of volunteers. I am sorry if it has hurt anyone’s sentiment.”

And it did not end here, then the next day Ramdev fired a list of 25 questions and challenged the IMA doctors to answer them. The questions were basically asking about the permanent solutions of some diseases and he challenges that ayurveda has the permanent solution for them. But yeah spreading this kind of negativity when people are already scared is wrong. This was not the first time, before this also Ramdev has said these allopathic drugs as ' murderers'. The fight for rights can also be done in legal ways without hurting someone's sentiments and spreading negativity.

The conflict between Ayurveda and Allopathy is not new. The allopathy came into existence in 16th century before that there were no qualified doctors like today. Then only ayurveda medicines are used. After the advent of modern science there has been a huge tussle between these two over which one is more effective.

Ayurveda is the traditional way of curing diseases and to improve lifestyles it has been used by people for thousands of years. The role of nature is the most important part of Ayurveda. The ancient understanding of Ayurveda is based on observations, trial and error and experimentation. But do you think this Indian ancient science is getting recognition in today's world? I would say, No. because these days anything is accepted only when it gets proven scientifically. So many methods of ayurveda are still neglected due to the fear of losing the modern science, and the truth is that this Ayurveda science is now been called as Pseudoscience but what i think is Ayurveda has got its own scientific temper and basis and it deserves better recognition. I don't think so there is a need to test ayurvedic medicines scientifically.

However, we cannot deny the fact that modern allopathy nowadays is working very efficiently and most people are alive today only because of them. It has shown huge progress in surgery and other fields also. There has been a decrease in death rates for heart diseases, cancer and a lot more. Even only modern science has the cure for different types of cancer. But still we can't ignore the fact that in many cases doctors themselves advise patients to practice yoga because some diseases can only be cured by it and yoga is a crucial part of ayurveda. And it is not the case of India only, the doctors of the whole world do it. Then why can't we accept it officially?

This conflict developed just because Baba Ramdev wanted the Ayurvedic science to be recognized and used by people because he believes it has the ability to cure every disease. He has been critical against allopathy and drugs, because of the allopathic doctors' rude behaviour disregarding Ayurveda. But the way of asking for his rights was wrong because you cannot insult doctors or modern allopathy especially when these are the only means of survival for people in this pandemic. The reason why both organisations have a war of words is that both of them don't want their field to be diminished.

We cannot scrutinize or validate modern medicine with Ayurveda. In fact, the same Ayurveda and Yoga, which are neglected by the allopathic doctors in India, are now gaining grip in western countries, while in India, Ayurveda is subjected to deride. Why don't we give equal recognition to both of them? Why do we give more importance to allopathy when ayurveda can work as well? Why do we ignore our traditional medicines just like we give more importance to English instead of our mother language? Both streams are best in their own ways. Everything has its pros and cons but two things can work efficiently if they are taken together equally. The government should have to give equal recognition to ayurveda medicines.

In these difficult times, when this coronavirus outbreak has proven to be stubborn, we should utilise all our resources no matter whether it is ayurveda or modern science. This is not the first time that we are facing a contagion. There has also been a time when contagions like plague and flu were outbreaked, that time also ayurvedic treatment had helped a lot.

At a time of covid when there is a huge burden over the doctors, if ayurvedic treatment is added then it will make it easier for the doctors to handle the situation and the country will be able to combat the disease more efficiently.

Both the ayurveda and modern science have their own importance and can be used together to make this world a healthier place but the fact is we humans are bound with the ropes of reputation, popularity and profit.  What we are seeing today is the result of those boundations.