“Baby, It’s Cold Outside!”: Why The Classic Turns Problematic 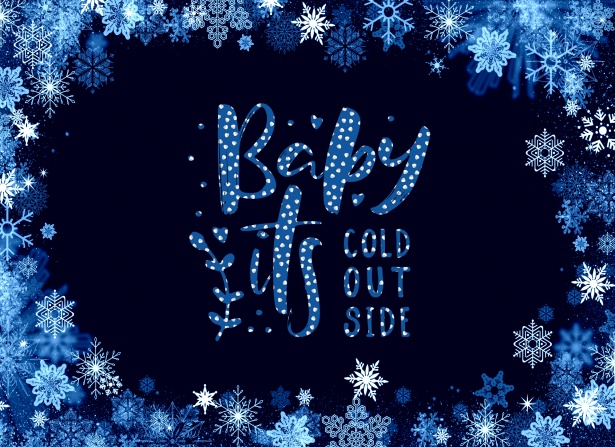 What comes with Christmas? Santa Claus. It is him and his elves, his flying carriage full of presents for good children, his reindeer, and his iconic laughter filling the night sky on Christmas Eve.

But wait! Santa does not come on a pitch-black lifeless night, does he? Of course, not; he comes on a white night full of snow. Christmas comes in the middle of the freezing winter, which keeps everyone inside for a sweet time with their beloved people and inspires one of the most loved but also controversial Christmas classics of all time, “Baby, It’s Cold Outside.”

With a sweet jazz melody especially suitable for the Christmas spirit, the duet “Baby, It’s Cold Outside” is no less iconic than Mariah Carey’s Christmas zombie, “All I Want for Christmas Is You.” With that being said, in recent years, with the rise of the #MeToo movement, the increasing awareness of sexual harassment, and the emergence of woke culture all over social media platforms, the classic seems to have become problematic. 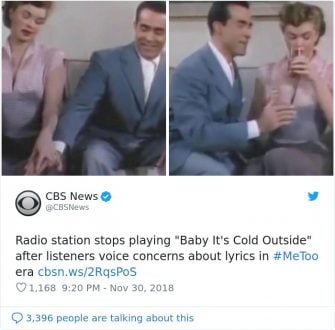 The controversy is so serious some radio stations stopped playing the song. Source: The Poke.

“Baby, It’s Cold Outside” started its life in 1944 as a classic piece of jazz written and first performed by Frank Loesser. He was a famous Broadway composer in his time, introducing his unique sound and style to the world through Broadway musicals.

Without learning music formally, Loesser had surprised the community of music lovers with his talent long before his Broadway career. Later, he eventually became the composer of his lyrics and marked his successful career with “Baby It’s Cold Outside,” the song that brought him the 1950 Academy Award for Best Original Song.

Featuring in the romantic musical comedy Neptune’s Daughter, “Baby, It’s Cold Outside” resembles a playful tit-for-tat conversation between the male and the female. Explaining the exciting structure of the song, Loesser revealed that he wrote the duet for him and his wife to perform at their housewarming party as they had to say goodbye to the guests.

It seems like his portrait of the reluctance to bid farewell was not much of a controversy back in the time. As reported, the only heated discussion about the song was whether it should be considered a Christmas song. The lyrics are all about the coldness of winter and are full of audacious flirting; in other words, it sounds more like a weather forecast or a cheesy love song rather than a Christmas carol.

Modern music listeners, however, may have a far different opinion. One of the first publicized opinions about how creepy the lyrics sound was presented. It said, “‘Baby, It’s Cold Outside’ has a lovely melody, but it’s an ode to statutory rape [...] In sum, the man gets the girl drunk amid her protestations so he can take advantage of her.” Based on this argument, the article argued that the song should be banned from the country’s broadcasting system.

Though the article was claimed to have been a mockery of political correctness, in 2018, with the rise of the #MeToo movement, the report was brought back as an essential argument for boycotting the song. The Time also mentioned that the lyrics were once considered “too racy” back in 1949. Apart from the overall “pushing” attitude expressed in the male role’s songs, the center of criticism surrounds the following specific line, “Say, what’s in this drink?”. It was said to take advantage of her.

Judging from the modern perspective, the arguments sound fair. Drink spiking was probably not so serious a crime back in the 50s of the last century, but it is in the modern world. One in thirteen women reported having their drinks spiked at least once in their life, which is a shocking ratio. With the comedian Bill Cosby’s rape charge and the increasing awareness of women’s rights backed by the development of social media, female listeners feel much less safe listening to such a suggestive song.

Also, the cultural norms have shifted. As explained in The Time, women in their fifties were expected to say “no” even when they wanted to say “yes” because of fear of judgment. Just as expressed in the song “The neighbors might think,” women felt much more pressured by social prejudice in the past. As modern listeners are familiar with the essence, the song’s original meaning is now shifted to a creepy and resentment-worthy message.

The critical question is, are these arguments enough to make this song no more enjoyable? This writer would like to propose her opinion: Not necessary.

Arguments are subject to perspectives. People who hate the song and its message have every right to stop listening to it, even “politically correct” lyrics like how John Legend and the movie Love Hard did.

And if you are among the people who do not find any problem enjoying the song's humor, go on and enjoy it! It does not, in any way, make you a sexist or even a rapist. Again, like any piece of literature, the song’s lyrics should be put into context, and if you choose to interpret it in the 1950s context where all the prompting is harmless, you also have every right to sway your body to the melody. 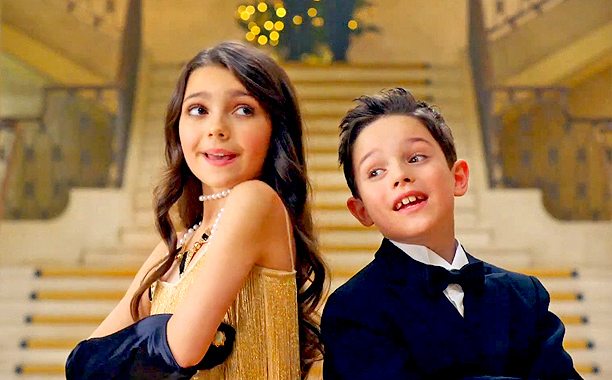 Whether the song is enjoyable is up to your perspective! Source: Idina Menzel and Michael Buble's "Baby It's Cold Outside" MV.

Before criticizing one another for being “overtly dramatic” or “ignorantly insensitive,” bear in mind that everyone is subject to the “diverging interpreting of what is implied” caused by a shift in audience. A linguistic theory proposed by Professor Michael Haugh of Griffith University says that a piece of text, when shifted from one specific audience to another, is likely to be differently interpreted.

This theory proposed that (mis)communication is not simply a result of the addressee’s incorrect inference of the speaker’s attention. Rather than labeling all cases “miscommunication,” “diverging interpreting” is the suggested term because different audiences have different understandings of one piece of text depending on factors such as their culture, living environment, education, religion, etc.

It is, therefore, entirely reasonable for different people to have different opinions over one single song. Diversity makes the human community what it is and therefore deserves our respect. Especially at Christmas when “forgetting self and finding time for others” lies in the spirit, wouldn’t it be nice if we set aside all the arguments and accusations and find a way to understand one another?