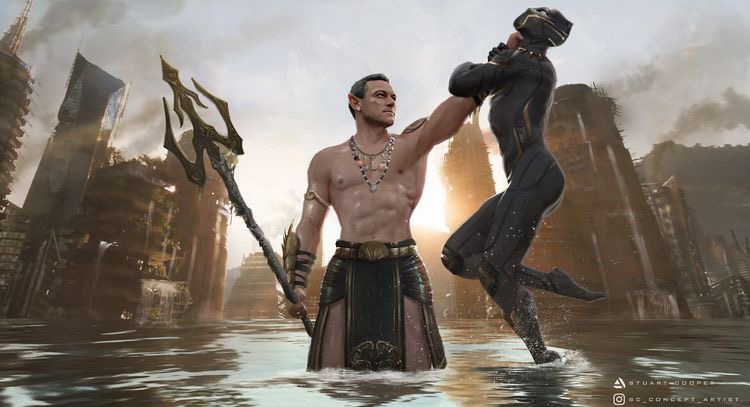 Wakanda and Atlantis are concealed civilisations with high technology and more militaristic abilities. Each country also decided to separate itself from the rest of the world for its safe being and from fear. Wakanda saw that their technology would be abused. Atlantis dreaded that surface dweller would come and violate the mythical city just like before.

The panic increased more when two once-hidden nations fight against each other. Wakanda and Atlantis have clashing history. Wakanda is the only country in the world that has means of approach to Vibranium. Although rumors of its power spread all over the world, and Namor’s human father was sent searching for this rare material in Antarctica. On his journey, he bumped into Princess Feb, who is known as the daughter of Emperor Thakorr of Atlantis. Namor was born a half-human and half-Atlantean. Few are as powerful as him — especially since he is a mutant as well.

Namor, also known as sub-mariner, is a character in American comic books by Marvel comics. He is a mutant son of a human sea captain and princess of the undersea kingdom of Atlantis.

Namor hated surface dwellers, regardless of his regular communication with them. Growing up, Namor always thought he would be the King of Atlantis. He then stood against Nazis with Captain America, Bucky Barnes, and all the All-Winners Squad. During a concise tragic threat, he fought the Black Panther. Black Panther knew a lot about Atlantean weakness and was so focused on Namor the Sub-Mariner, in case they fought. Even though Namor was not an enemy then, he became one.

Namor’s alliances all these years have been irregular. He went from working with Doctor Doom to working with Avengers. During the events of Avengers and X-men, he took X-men’s side. Five mutant leaders then started hosting the Phoenix Force, which involved him. He had the power to portray his abilities and his anger.

Tracking the Avengers to Wakanda, Namor implemented a giant tidal wave. It flooded the whole country of Wakanda, damaging the kingdom and ending innocent citizens’ lives. The act of war would drive a wedge between Black Panther and Namor as well as T’challa and Storm.

In the middle of the incursions, universes were set to clash, and both Black Panther and Namor had to come to a challenging conclusion. Which was choosing to destroy the other Earths, which means saving theirs. T’challa then emptied the dead Earth, and this led to regret. He was against destroying the Earth, regardless of his ancestors. Namor did what he thought was best for his nation. Tensions were raised between Wakanda and Atlantis, as politics are not for the faint-hearted. Even though Black Panther tried to make peace with Namor, Wakanda did not support him. T’challa’s reuniting with Namor was unsettling among the Dora Milaje and the queen of Wakanda. Queen Shuri ambushed Atlantis and completely decimated the population and its structure.

Namor went back home to find the kingdom no more and a piece of information from Proxima Midnight and Thano’s Black Order. Thanos was looking for infinity gems. Proxima Midnight saw the demolition of Atlantis and provided to reserve Namor’s life in exchange for more information regarding the whereabouts of the Infinity Gem plus his loyalty to Thanos.

Namor accepts to put himself in order with Thanos. He was also untruthful that there was a gem hidden in Wakanda. When Atlantis was demolished, he desired Wakanda to suffer. He knew that the Black Order would ambush Wakanda searching for the celebrated Infinity Gem.

Wakanda hardly pulled through, and Wakanda nor Atlantis has moved on from the past. There is no end in sight to their war. One thing that will bring them together is an even huge threat.

These Great nations would either lead the world a step forward or a step backward into destruction. Wakanda declared itself to the world, and Talokan has shown its power.

Wakanda Forever shows how Queen Ramonda, Shuri M’Baku, Okore, and the Dora Milaje confront to preserve their nation from interceding world powers in the wake of King T’challa’s death. Wakandans aim to hold their next chapter; the heroes come together with Nakia and Everett Ross to form a nee way for their beloved kingdom.

Wesley Snipes arranged to make a Black Panther film in 1992, but the project did not make it. In September 2005, Marvel studios had Black Panther as one of ten films made from Marvel characters with the intension to be produced by Paramount Pictures. Mark Bailey was to write a script in January 2011. Black Panther was declared in October 2014, and Boseman was the character. Captain America: Civil War 2016. Cole and Coogler were part of the film and other casts in May. Black Panther is known to be the first Marvel Studio film directed by a black person and with a Black cast. The photography was from January to April 2017 at EUE/Screen Gems Studios in Atlanta metropolitan area and Busan, South Korea.

Black Panther made its debut in Los Angeles on January 29, 2018, and was in theatre in the United States on February 16. Critics commented that the direction, writing, acting, especially of Boseman, Jordan, and Wright, costume design, production values, and soundtrack some commented on the visual effects. Some critics loved the film and said it was the best.