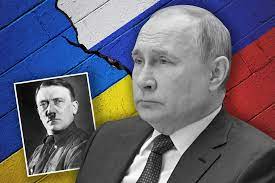 Russia's so-called 'special military operation' in Ukraine that commenced on 24th February 2022, has been established as the biggest threat to Europe since the Second World War. As yet, Russia's future military plans that exceed Ukraine are unknown. However, Vladimir Putin is certainly on a quest to restore the global power Russia had lost in 1991 and introduce a new and improved Russian sphere of influence. Putin's mission to end Russia's geo-political isolation, uniting 'a one people' and expanding Russian territory by force, following a significant loss of power within the last few decades arguably resembles the rise of the Third Reich at the hands of one Adolf Hitler, 90 years ago.

Hitler and Putin as individual leaders bear many differences and to claim they are more similar than different would be incorrect. For one, Putin lacks Hitler's charismatic leadership and their political ideologies do not correlate seeing as one of Putin's aims is to 'de-nazify' Ukraine. Putin is neither genocidal nor inclined to systematic ethnic cleansing and Hitler had managed to rally support unparalleled to any modern political movement today.  But in the context of reforming the 'security architecture' of Europe to satisfy their state's national interests, their foreign policy's direction of travel bears a resemblance worth noting. The fear of invasion when Putin deployed 100,000 troops on Ukraine's borders echoes the occupation of the Sudetenland in 1938. Coincidently, both leaders were barred from advancing further- Putin into Ukraine and Hitler into Czechoslovakia. However, these mobilizations granted them access to the rest of Europe and subsequently, they transgressed peace treaties: Putin - the Minsk Agreement II 2022 and Hitler - the Munich Pact of 1938.

In a televised address, Putin claimed that mobilizing troops on the borders was to ensure peace but in actuality, it secured him easy access to advance into the country.  Similarly, the Sudetenland occupation was granted by Western allies as a peace offering, namely the Munich Pact but retrospectively, was a time-buying ploy allowing Hitler to strategize his expansionist policy, effectively permitted by this appeasement. Both Ukraine and Czechoslovakia were on the frontline of Russia and Germany's war with Europe. The Nazi invasion of 1938 was the first and Hitler soon took Poland and France. If Putin succeeds to defeat the Ukraine army and destabilize Zelenksyy's government, some predict he will advance further into Europe, most likely a non-NATO land grab, Finland being an obvious choice.

Although two singular invasions are partially comparable, is there a parallel that can be drawn between the leaders' motives?

One reason behind both military expansions was a nationalist incentive and a determination to unite a people they claim to belong to the state, ideologies that both men addressed in publications prior to their aggression. In his essay, On Historical Unity of Russians and Ukrainians, published last July, Putin justifies the invasion by asserting that the people of Russia and Ukraine are “a single whole” and are united by a history of common language, religion, and kinship. He goes as far as to say that Ukraine will never operate autonomously without its neighboring state. Correspondingly, Hitler's autobiography Mein Kampf conveys his fanatical belief in Lebensraum, a nationalistic concept of creating a living space for all German-speakers whom he believed were the superior race. In 1938, Hitler gained 7 million by annexing Austria, the Anschluss, and 3 million by occupying the Sudetenland. The Anschluss has also been said to ominously mirror the Russian annexation of the Crimean Peninsula in 2014.

Both political crusades were motivated by the previous collapse of the states and catalyzed both leaders' rise to power. In 1991, the dissolution of the Soviet Union led to political instability, social unrest, and economic breakdown. The Gross National Product of soviet republics had fallen by 20% and crime and corruption soured. From 1918, the aftermath of WWI and The Treaty of Versailles bankrupted Germany into an economic depression, reduced its army to 100,000 men, and deprived it of 13% of its European territory. The humiliation they felt as the countries' global influence evaporated drove Putin and Hitler to “make Germany and Russia great again.”

Hitler's sequential invasions and subsequent declaration of war with the West illuminates the staggering fragility of our free world, a current realization for the civilians of Ukraine who are currently either fighting or fleeing for their lives. But a vital difference is the current European security. In a post-war era, the fear of repeating the atrocities of the First World War meant rising leaders like Hitler and Mussolini were not challenged and had very little interest in international diplomacy and the League of Nations deteriorated within a decade. NATO on the other hand was founded in a very different climate, the Cold War. Established in 1949, NATO has since created and protected a cooperative international alliance, consisting of the US, Britain, France, Hungary, and Canada, to name a few. Although Ukraine is yet to be integrated, 20 countries, mostly NATO members, have funneled arms into the country to resist Russian forces and 22,000 extra troops have been deployed to Estonia, Latvia, Lithuania, and Poland.

The comparison between Putin and Hitler is yet to be embraced by mainstream discussion and is one that should be considered at arm's length. As mentioned previously, the differences between them outweigh their similarities. But the pattern of Putin's foreign policy and Hitler's territorial acquisitions has drawn a notable comparison we have not yet seen.