Coping with Autism Spectrum Disorder. An Analyses of 'Here We Are' Directed by Nir Bergman 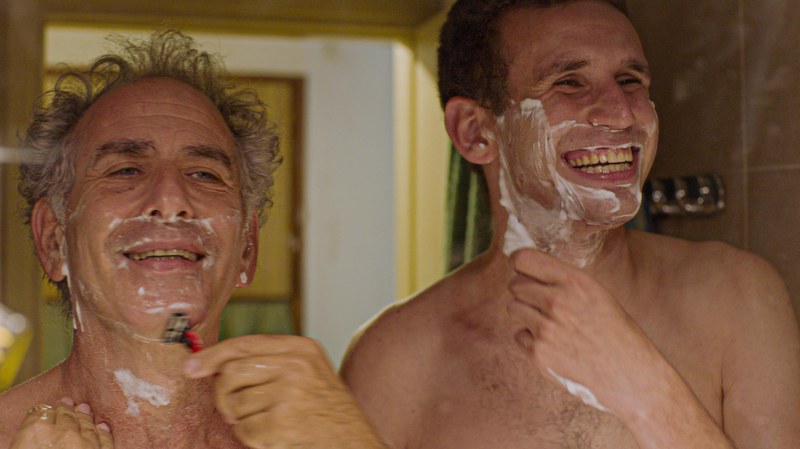 Here We Are is a soft film on autism and a story of acceptance of disabilities. Aharon is a complicated, loving, and patient father who has given up his career as a talented graphic designer to dedicate himself to his 20-years-old autistic son Uri. He is a funny boy, fond of The Kid by Charlie Chaplin, the only entertainment that can distract him. Comparing Here We Are's story with The Kid's story is one of the most innovative and unusual devices of Nir Bergman's direction. Uri is as big as the child, minor, as clumsy as the child, intelligent, and as passive as the child active. The two children have a similar father-son relationship: love and feelings have connected them, for better or for worse.

Aharon and Uri's collaboration consists of small and fun habits applicable to Uri and the autism spectrum disorder. Aharon treats Uri as a child, but, on the contrary, he needs to open up slowly to the world. The prospect of a "new home" breaks Aharon's heart and terrifies Uri. The bond between these two is inexplicable by words, but it contains devotion and affection.

Here We Are is not a film about autism, not about the father of an autistic child or the challenges of a man with a disabled child; it is a film about a father and a son and the inevitable separation between parents and children. Additionally, Aharon is running away from his life; he has neglected passions, family, and friends to live with his son and share with him meaningful moments. After he resigns from work, he thinks of finding his place in the world, especially in Uri's world. His renunciations, which are admirable in some respects, ultimately prove to be a form of absolute control over Uri's life and growth.

By contrast, Uri's mother and Aharon's former wife, Tamara, is a reasonable woman. She lacks affection, but she enforces her will to finally see her son socializing with peers and accommodating him in an institution adapted to his needs despite his refusal. Aharon is afraid of mental health professionals and beginning to live without Uri. Their bittersweet relationship is Aharon's last attempt to cling to his son. To escape the fateful moment of confinement, the father takes the son on a journey around Israel by bike, bus, and train, an escape that leads to past family frictions but also a new consciousness.

In the film, educational actions take place in various forms: as conflict and problem solving, as an existential balancing act, in which there can be highlights, but also crashes, especially when only one parent physically takes care of the problem by giving up one's own life. The father knows everything about his son: he is the only one who can calm the boy when he is overwhelmed by his stereotypes and phobias (the sliding door button is the funniest ritual of Uri's paranoia). The boy can only think with his father's help, and no one else can break the symbiotic relationship.

Scientific studies have demonstrated that whatever affects one family member affects the whole family directly or indirectly. The separation between Aharon and Tamara and, consequently, the disruption of their communication provoke a dysfunction of the entire system and not only of Uri. Aharon is overprotective with Uri, not allowing him to develop a sense of autonomy. Aharon is convinced that Uri will always face difficulties that will not disappear and that they need constant care. Within this framework, institutions should avoid dysfunctional parental behaviors, effectively support parents, and cooperate with them to design a treatment and set a realistic goal. However, it is easier said than done. The lack of social and political institutions regarding assistance to families and regulations is noted, without mentioning the lack of political discussions on care systems for individuals with disabilities.

In a dramatic scene, the camera focuses on the disgusted expressions of bystanders who look at Uri when he has a meltdown on the train's platform, wailing and flailing in despair. This perfectly represents how the world itself reacts to autistic people. As our children grow up and become independent, autistic children continue to remain vulnerable and exposed. It's hard for them to grow up in a society where they are stigmatized. In general, people are not aware of the social consequences of having an autistic child. If the child has a disability and the parents can't cope, it is normal and understanding. No better father or mother can handle an autistic child.

The empathetic and well-played film will probably touch all parents, whether their children are or are not disabled. Here We Are shows the difficulty of integrating parents' wills and desires, Uri's need for assistance, and parents' love. Aharon's paranoid way of acting when facing Uri's integration into a community results from the traditional model of parents who are informed about the decisions taken but are not allowed to express their opinions or wishes. Children are treated as passive recipients of therapy, and so, parents' sense of trust is lost.

Mental health experts should provide substantial support to exhausted parents where children with autism spectrum disorders are included in therapeutic programs developed by institutions and increase parental engagement in decision-making. This will result in valuable social growth for each citizen. Parents who cooperate with mental health professionals become more able, knowledgeable, and assertive. At the same time, mental health professionals should recognize that parents possess specialized knowledge that they lack. Decision-making is reached after a mutual exchange of ideas and with respect. Therefore, can the institutions guarantee an inclusive and cooperative care system, or will parents of autistic children always feel abandoned by the state?