Elected Criminals of India and A Nexus of Ignorance 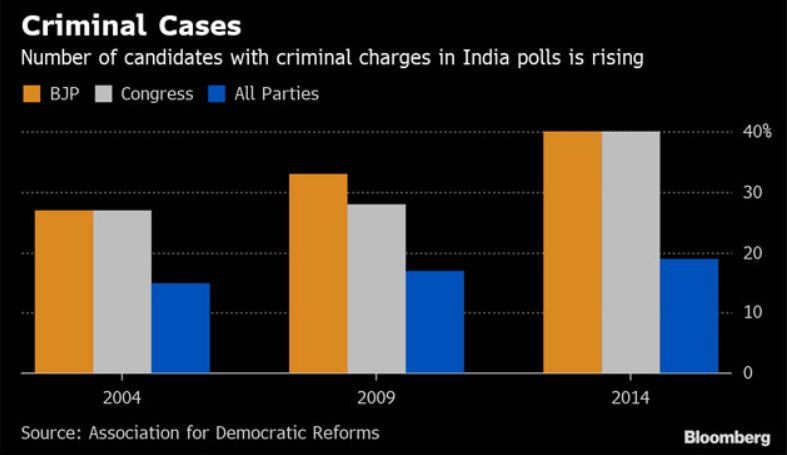 India is a democratic nation, and under a democratic system of governance, we choose our representatives who are supposed to be accountable for running this country; thus, persons who enter the sphere of politics must have a clean reputation and great ethical integrity. The criminalization of political culture has been a matter of concern for Indian democracy, and it is now a grim reality.

Politics has been criminalized in many areas of the world, posing a significant threat to civilization. The word alludes to the connections that exist between criminals and politicians in general. However, a sizeable number of elected politicians have been charged with murder, attempt to murder, abduction, and rape, among other crimes.

While this is a problem in many nations, India is encountering it on a massive scale. India may boast that it is the world's largest democracy but it cannot claim to be the greatest democracy of stellar legislators because there has been a consistent and brazen uptick in the number of political candidates, whether for Parliament or state assemblies, who have prior charges against them throughout the years. In the Bihar Assembly elections in 2020, 68 per cent of the elected candidates had a criminal record, with most of them charged with severe offences.

Corruption is wreaking havoc on the democratic spirit, with countrywide polls revealing the severity of the decay. As per a report released in April 2018 by the Association for Democratic Reforms (ADR), a non-profit organization that works on electoral and legislative reform, 1,580 Parliamentarians (MPs) and Members of Legislative Assemblies (MLAs), or roughly 34% of India's leaders, have criminal prosecutions pending against them.

Legislators' affidavits were used for the analyses. The study examined the testimonies of 4,845 MPs and MLAs throughout the nation, including 768 of 776 MP's affidavits and 4,077 of 4,120 MLA's affidavits.

Although some of the allegations are minor, more than 20% of the MPs who competed in the 2019 general elections are facing severe charges such as attempted murder, assault on public authorities, rape, abduction, and extortion. According to the research, almost all major parties in India, led by the reigning Bharatiya Janata Party (BJP) and the biggest opposition Indian National Congress (INC), nominate tainted representatives.

A person convicted of any offence condemned to imprisonment of two years or more in India is barred from participating in elections. However, those facing accusations have the option of contesting since the overburdened justice system can take ages to complete a case. In the 2014 election, the percentage of such contenders was 17%, up from 15% in 2009.

K Surendran of the BJP topped the list of contenders with the most unresolved criminal charges, which encompass rioting, trespassing, and attempted manslaughter, with 240 matters against him. He claimed that the majority of the incidents result from his role in the BJP's endeavour to restrict girls and women of menstruating ages from entering the Sabarimala temple in Kerala.

According to the data, Dean Kuriakose of the Congress Party has had the second-highest incidence of criminal accusations against him. The majority of the charges were tied to a violent political protest in Kerala against the incumbent Communist Party.

The political influence of the police, public funds, corruption, inadequate legislation, a lack of morality and ethics, vote bank politics, and inefficiencies in the election commission's operation are all aspects of the criminalization of Indian politics. The fundamental aetiology for the emergence of alternative ways of conflict resolution in India seems to be the country's substandard functioning of the legal system.

Leaders with a criminal history might have an opposite influence on crime. One branch of previous scientific studies recognizes mafias' direct or indirect backing from elected, criminally charged leaders, which leads to an increase in criminal activities in the territory. In states with weak governance and judicial competence, there is a recurring relationship between crime syndicates and legislators. Another branch of study, on the other hand, addresses voters' choices by dismissing the 'ignorant voter theory.' It claims that people do not expect help from the state's insufficient institutions and, as a result, voluntarily elect criminally accused politicians as their 'Robin Hoods' or 'godfathers,' who can defend local communities during times of socio-economic catastrophe.

Indian polity is entwined with protest politics. History illustrates that many peaceful demonstrations turned violent, resulting in several politicians and activists facing prosecution for disrupting public order. Such civil order transgressions, which are a common means of engagement in Indian politics, are inherently different from grave offences such as homicide, rape, and physical aggression. For example, Arvind Kejriwal, the Chief Minister of Delhi, was charged with illegal assembly at a protest in 2012 in favour of suggested anti-corruption legislation. After years in jail, Pappu Yadav, a leader from Bihar with a slew of criminal allegations against him, including severe charges of murder, re-entered Parliament. Because both leaders are formally charged with criminal acts, it is critical to distinguish between the allegations.

The possible impact of criminal lawmakers on criminality, whether beneficial or harmful, is based on a shared notion of a frail judicial system. One hypothesis is that the presence of criminally accused leadership, particularly those charged with grave offences, worsens the public order situation. This phenomenon is referred to as mafia raj or jungle raj. The suspected politicians in these regions are either well-connected mobsters or are explicitly or implicitly tied to mafias, using the inadequate rule of law and fostering an environment advantageous to crime.

Indeed, corruption is so common among politicians, particularly in the heartland, which is rife with engrained socio-economic and gender inequities, that soiled candidates frequently flaunt their reputation as a source of pride. Candidates constantly make pompous remarks about who is the "worst criminal."

According to a five-judge constitution panel led by former Chief Justice Dipak Misra, criminalization of politics is an "absolutely catastrophic and sad situation" that might "send chills down the spine of a democratic country. “The court went on to say that while the criminalization of politics was "not endemic," it needs to be remedied immediately before it becomes "destructive" to democracy.

According to observers, another explanation for why lawlessness thrives in the political sphere in India is because of lengthy proceedings in courts and lower conviction rates. According to statistics presented by the government to the Supreme Court, just 6% of criminal charges against India's Parliamentarians and MLAs resulted in convictions in 2019. Of the 3,884 such instances, 38 were found guilty, and 560 were acquitted, resulting in a six-year prohibition from running for office. There were no convictions for felony charges involving MPs and MLAs in 18 of 29 states and two of seven union territories; the cases included murder, attempted manslaughter, abduction, inciting hatred, and unlawful coercion.

The rising cost of election campaigns, combined with an opaque election funding framework defined by politicians and parties under-reporting collections and expenditures, inherently leads to parties favouring rich candidates who do not drain the party's limited revenues but instead contribute rents. Many of these candidates may be on the wrong side of the law.

There has been little significant effort to rectify the structure because a dysfunctional system benefits everyone. The ruling BJP and the opposition Indian National Congress were arraigned in March 2014 by the Delhi High Court for obtaining overseas funding in defiance of the Foreign Contributions Regulation Act (FCRA). It instructed the administration and the Election Commission to investigate these irregularities again. However, the administration subsequently revised the FCRA and implemented a money bill without any parliamentary debate. This certainly established a perilous paradigm. The decision has formalized unrestricted anonymous donations to political parties, which cannot be contested or retrieved under the 2005 Right to Information Act.

According to experts, to address the root cause of the issue, India requires a concerted effort to make its electoral funding framework transparent, to induce parties to be more democratic and to guarantee that citizens have access to improved solutions and an egalitarian judicial system.

The destiny of any republic is in the hands of its politics. However, it appears that the rule of law is currently only existent in literature. Perpetrators, local elites, and the system have conspired to build a toxic concoction that is now proving to be detrimental to democracy. Corruption and criminalization of politics are eroding democracy's fundamentals.

A clean electoral mechanism is the only path to a healthy democracy.