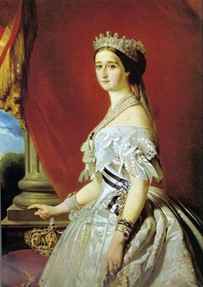 Everyone has heard of the Napoleons – the former imperial and French royal dynasty, the most famous being Bonaparte, but very few know of the wife of Napoleon III (Bonaparte’s nephew), Spanish-born Countess of Teba Eugénie de Montijo. Born in 1926, she lived until she was 94, an extraordinary amount of time, especially considering the period she lived through – devastating cholera epidemics, a bloody French Revolution, exile from France, and the First World War. She was also an incredibly inspiring, modern woman, paving the way for many of the 21st Century’s social, educational, charitable, and fashionable standards.

Her charitability, courage, and benevolence

As a foreign Empress, Eugénie was not initially very popular with the French following her marriage to Napoleon III in 1853. However, once she visited hospitals and prisons, her approval began to grow. It seemed that her central source of torment was the welfare of the needy or sick. These visits were particularly focused upon in contemporary paintings.

In 1854, the Royal Hospital for the Blind was placed under her patronage. In 1870, the Tuileries (the royal and imperial palace in Paris) was converted into a war hospital, where she could often be found caring for the patients herself. The devastating cholera epidemics between 1865-66 brought Eugénie closer than ever to the French people. She displayed selfless courage as she and her husband risked their lives to visit hospital patients. A favourite anecdote of the period was when Eugénie met two orphaned children, and she replied that she would adopt and provide for them.

Her courage was also displayed when she and Napoleon survived an assassination attempt in 1858 on the way to the opera. Despite a cut on her face and blood on her dress, the imperial couple arrived at the opera only slightly late. Then, once settled in England, she continued to donate to most of her former public charities with donations from her private purse, commenting that others should not have to suffer just because she had. Eugénie again converted her home into a World War One hospital in 1915, supplying it with the latest technologies. She also donated her yacht, The Thistle, to the Admiralty and donated £200 to the British Red Cross. For this, she was awarded a special medal, presented to her by the King, George V, in 1919. In her will, she left thousands of pounds to various British and French charities.

A promoter of girl’s education and political autonomy

In 1857, using money given to Eugénie as a wedding gift from the City of Paris, she established the Foundation Eugène Napoléon, a boarding for impoverished French girls. They were prepared for independent life at 21, taking lessons in mathematics, reading and writing, physical education, and learning how to sew. Eugénie maintained diligent oversight of the foundation, ensuring they had good diets and that there was fresh water, central heating, and green outdoor spaces.

Eugénie continued to encourage girls’ education and political independence in the last years of her life in England, lending her support to the suffrage movement. She also inspired the religious order to found a convent school, attending its events and inviting girls to tea.

During her lifetime, Eugénie was known as the ‘Empress of Fashion’ of the 19th century. Anything she wore, such as the crinoline, was copied across Europe. She particularly loved the style of 18th century France and took Marie-Antoinette as her role model. Winterhalter’s famous painting, The Empress Eugénie Surrounded by her Ladies-in-Waiting, illustrates her entourage’s elegance. When Charles Tiffany of Tiffany & Co. saw a portrait of the Empress, he knew the shade of blue she wore would become incredibly popular. Therefore, he decided to make it the official color, Pantone No. 1837, for his brand, which remains today.

When the need arose, Eugénie stepped into her husband’s shoes and ran the country politically. On three occasions, she was declared Regent - during the 1859 Italian War, when Napoleon was unwell in 1865, and for a final time in 1870 – and presided over ministerial meetings. While her Republican enemies (those who would go on to overthrow the Second Empire and declare the Third Republic in 1870) would depict her as a violent agitator, those closer to her said she assumed the Regent role admirably, with ‘grace and intelligence’, ‘political tact’ and a firm ‘sense of justice’, as written by Augustin Filon, who knew her personally (Recollections of the Empress Eugénie, A. Filon). Her qualities were even likened to Queen Victoria, possessed by no other Empress or Queen of the period.

A widowed and bereaved mother

Within a decade, Empress Eugénie had lost her Empire, her home, her husband, and her only son, Prince Imperial Louis-Napoléon. In 1873, Napoleon III died following a gallstone operation, and then her son was tragically killed while fighting for the British in the Zululand in 1879. She later wrote, as recorded by Edward Legge, who wrote several biographies on Eugénie, ‘I am left alone, the sole remnant of a shipwreck… I cannot even die’ (The Empress Eugénie 1870-1910, E. Legge). The funerals in their hometown of Chislehurst (Kent) drew in huge crowds, both French and English, a testament to the respect the Imperial family had gained since they arrived in England. The crowd at Louis-Napoléon’s funeral was estimated to have been around 100,000. Upon the request of Queen Victoria, a cross was erected at his death site, and a monument was built in St George’s Chapel. Though she never quite recovered from their deaths, Eugénie went on to live for another 40 years, continuing charity work and supporting others in their memory, an inspiring achievement.

The Queen of England was a great source of comfort and support for Eugénie at the time of those deaths, particularly given that Victoria had lost her husband in 1861. They had struck up a friendship in 1855 when Victoria and Albert invited the Imperial couple on a state visit to Britain. This was a defining moment for the new regime, placing them amongst the power from the mighty empires of Europe. Their friendship when far beyond what protocol demanded, with Victoria charmed by her courage, charm, and cheerfulness. It was not lessened by the fall of the Second Empire; Victoria often visited Eugénie at Chislehurst and then when she moved to Farnborough (Hampshire). Eugénie became godmother to, and the namesake of, one of Victoria’s granddaughters. When Victoria died in 1901, it was an immense loss to Eugénie, and she grieved for the friend with whom she could speak freely about their life experiences.

Moving with the times

Eugénie lived during a time of significant technological development. She took this in her stride and adapted commendably: her refurbishing of her Farnborough Home, Farnborough Hill, included all the latest gadgets, including electric lightbulbs and the telephone. She also owned one of the first motorcars in Farnborough Village.

By her death in 1920, British newspapers were almost unrelenting in their admiration for the ex-Empress Eugénie, praising her ability to face revolution and significant change almost alone. They argued that few women had suffered as intensely as she had. Today, ‘Empress Eugénie’ should be a household name and represent patriotism, benevolence, patience, and bravery.