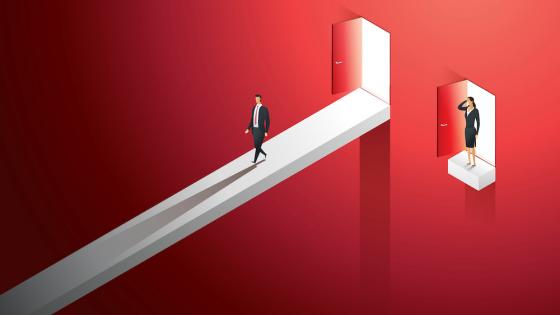 Gender disparity can be defined as the difference or "gap" between the well-being of males and females within a specific population. A country's disparity's determinants include economic participation and opportunity, educational attainment, health and survival, and political empowerment. Gender disparity constitutes a difference in accessibility and reward: the possibility of women to share the same educational, economic, career, and legal opportunities as men and to be rewarded with the same wage when in the same position.

Despite being relatively behind its European Union companions in development, Poland has experienced substantial economic growth in the past years, with the most recent GDP per capita equal to USD17,840.9 in 2021 and an FDI inflow of 2.9% of GDP in 2021, according to the World Bank. Furthermore, Poland's adequately high Human Capital Index score of 0.8 in 2020 (World Bank). Thus, Poland's female-to-male ratio appears to be fairly balanced within all age groups, and its female labor force participation rate has remained steady at 48-49% in the past ten years (World Bank).

Nevertheless, Poland experiences high gender disparity along with the 24th place in the European Union's Gender Equality Index ranking with 55.8 out of 100 points (EIGE, 2020). According to a report released by McKinsey & Company in 2021, the Polish economy could experience a GDP growth of 9% in the next nine years if it were to increase female participation in the labor market (McKinsey & Company, 2021).

Since 1978, China has exhibited considerable GDP growth, but its GDP per capita remains relatively low, with FDI gradually decreasing since 2010. It is projected to face more downward economic pressures in 2022 due to COVID-19 and its strict Zero-Covid policy. According to World Economic Forum, China's Global Gender Gap Index is 0.682, ranked 102nd out of 146 countries, being especially poor in the Sex ratio at birth and political empowerment sectors (2022).

Surprisingly, the gender gap in labor force participation rates rose from 9.4 percent in 1990 to 14.1 percent in 2020 (Zhang and Huang, 2020). Several factors contributed to this increasing disparity, including a preference for sons over daughters, hiring discrimination, poor child care support, and maternity leave. This gender disparity may result in a missing structural transformation into a higher value-added industry and a loss of 4.9 percent aggregate demand increase in the long run since women have a comparative advantage in services (Brussevich et al., 2021).

According to the World Bank (2021), India's economic condition began to decline even before the onset of the COVID-19 pandemic despite its staggering growth rate for years. Its recent GDP per capita for 2021 is USD2,227.43, with an FDI inflow of 2.41% of GDP in 2020. Compared to the 174 countries sampled by the World Bank, India ranked at the 116th position in terms of human capital with a score of 0.49 (The Hindu, 2020). As the population expands further in the country, India is set to become the largest and youngest working economy in the foreseeable future.

India has a severe ongoing predicament in gender disparity as the country is notorious for sex-selective abortion, female infanticide, and early marriage age. Girls are more vulnerable to the possibility of child marriage, teenage pregnancy, child domestic work, poor education and health, sexual abuse, exploitation, and violence in societies that have high gender inequality rates like India (Unicef, n.d.).

Even with the Indian government prohibiting prenatal sex discernment in the early 1990s, illegal sex detection and abortion clinics still exist in the 21st century. India's skewed sex ratio is one of the highest in the world and is forecasted to worsen further in the upcoming decades. Apart from this, 1.5 million underage girls get married in India every year. However, the probability of girls getting primary education in most regions in India is nearly 50% lower than boys (Desai, n.d.).

As a result, young brides terminate their education if they have received it in the first place and instead engage in unpaid housework that is not counted in GDP as they take care of their new household while also often becoming pregnant (UNICEF, n.d.).

This gender disparity causes a potential loss in economic growth. According to the Elks, investing in girls' education can boost the GDP of emerging markets by 10% over the next ten years (2020). Every USD1 spent on girls' rights and education generates a USD2.80 return equivalent to billions of dollars in GDP.

This contrasts with India's patriarchal tradition and culture, in which some regions still perceive young women as economic burdens that cannot contribute to the family's financial standing (Harvard Kennedy School Review, 2019). According to the World Bank, less participation of women in employment and entrepreneurship costs the world about 15 percent of its GDP. McKinsey concluded that in a scenario where women participate as much as men in the economy ("full potential" scenario), it would add $28 trillion (26 percent) to the annual global GDP by 2025 when compared to the current business (2018).

In addition, Businesses that care more about gender equality tend to make better decisions and have higher profits. In research by Cloverpop, teams with more diversity and are comfortable accepting various backgrounds make better business decisions up to 87% of the time (Forbes, 2022). Furthermore, Mckinsey & Company, after analyzing over 1000 companies worldwide, found out that gender diversity in a company attracts and retains better talent and leads to higher profits and long-term value (2021).

By contrast, those with less diversity in gender and race are more likely to profit less by 29%. In the case of India, which still has one of the lowest women's participation rates in the labor market, even in urban areas, this potential loss is more substantial. Once this issue has been tackled, the economic impact of achieving gender equality concerning equal participation of women in the workforce will increase India's GDP by 27 percent or an estimated amount of USD700 billion by 2025 (UN India, n.d.).

Empowering women economically will further boost consumption in the economy with more disposable income within each household, enhancing the flow of money within the country and fixing the low consumption rate within India's middle-income group. More women will purchase devices needed for their work. For example, it was found that more than half of the women in India do not have cell phones. If women have phones like men to use for work, it would create USD17 billion in revenue for phone companies in the next five years(UN India, n.d.).

If more women engage in their careers and provide labor to the workforce, they would not be able to devote themselves solely to the household-they initially had. As a result, fertility rates will be reduced (Worldbank, 2018). Currently, India is facing issues with overpopulation as it has become one of the most populated countries in the world.

Since India is the largest democracy and given the government functionality, there is a low chance of population control through natural laws and policies. Encouraging women to work provides a proper way of population control: once women engage with and explore different career paths instead of giving birth incessantly can keep the population under control and benefit the economy in the long term.

While the issue of child marriage significantly impacts the welfare of girls in India, its financial and social benefits seem to outweigh that expense. A feasible solution to this problem would be to increase the legal age of marriage for women. PM Narendra Modi decided to raise the minimum marriage age for women to 21. If this law is strictly enforced, this could significantly decrease the number of child brides in India, diminish the social norm of treating daughters as dowries and perceive them as part of the younger labor force that can contribute to the economic and financial standing of the family.

One of my recommendations is to change children's perception of gender roles through media and Bollywood and create more exposure to both genders' varied roles. Bollywood, the multi-billion film/entertainment industry, influences Indian culture and reflects the country's ideology.

For instance, having actresses playing roles in primarily male-dominated fields, such as finance, piloting, or engineering within media, can help young children understand that jobs and careers are not specific to gender and can be pursued by anyone. Famous actresses and influential females can further endorse campaigns that promote gender equality. They can serve as advocates for promoting equality and use film, modeling, and entertainment as a platform to help women free their mindset from only serving for domestic work.

Improving educational opportunities provides the basis to resolve gender disparity. Reframing the ideologies of parents with regards to girls' education by making informed perceptions on job opportunities for women will increase their need to send their daughters to school. The ability to complete formal education is critical to economic, social, and political success, and eradicating these barriers to girls' education might be the key to achieving most of the 17 Sustainable Development Goals by the UN. Also, reducing enrollment costs will most likely allow girls to be enrolled and retain admission in schools. Additionally, subsidies may cause a higher enrolment rate for females in relatively poor households.

It is becoming more well known that startups in India are growing from startups to unicorns in a brief period. This alone makes a foreign direct investment in these startups more attractive. We recommend that India can have an "All girls startup" campaign or movement while attracting FDI that focuses especially on gender equality goals. Where the founders of the startup are majority women, and they are actively hiring other women who have degrees and certificates.

This would further encourage women and give them the confidence to pursue startup jobs. In addition, if the majority workplace environment is female, there is a higher chance of the families allowing them to work as it will be perceived as relatively safer. These startups can serve as a transitioning point for the women who were considering work but did not find the opportunity. In addition, this further gives women with degrees and higher education levels the opportunity to explore and impact their community.

The policy should facilitate the marketization of home-produced services, including cleaning, child care, and tutoring, which will positively affect the economy by increasing aggregate output. In addition, there should be governmental and social institutions that help women to find work. Those institutions should function to connect unemployed women, who presumably just worked as housewives or took maternity leave, with companies that have corresponding demands.