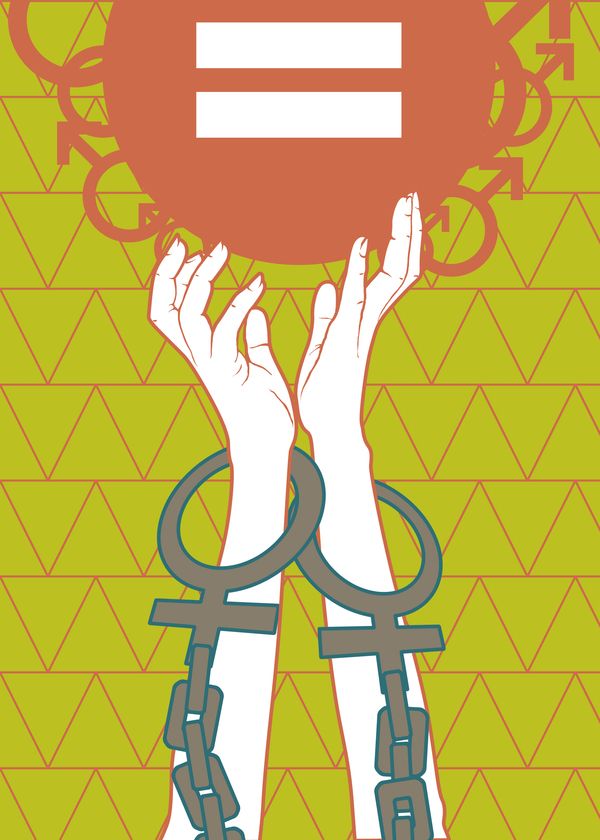 How often do we hear the question that women have rights now and are choosing careers of choice? Why do we need feminism? Having legal rights and law enforcement for gender equality is essential but not enough. According to UN Women (2018), there is still a denial of women’s rights all over the World: Only 52% of women marry, have sexual relations, and use healthcare by their own choice. The right over one’s own body is the minimum level of human rights that has to be guaranteed, yet millions of women are denied this primary right.

Even if law ensures “equality” in all fields, the nature of society continues to look down upon women who decide to move on a trajectory of career success over familial ties. A woman is judged and objectified for choice of career, sexual openness, way of life, all detriments of choosing her outfits. There is an “appropriateness” associated with a woman’s dress, where her being covered is the established norm, and her will to show skin is frowned upon. This is a reality of women even today, in the 21st century. A century of free ideas and free will. Feminism is needed today more than ever, not just for women’s rights but for equality of all genders and to crush the notion that heteronormativity is the correct course of being.

Simone De Beauvoir says in ‘The Second Sex’, “To be feminine is to show oneself as weak, futile, passive, and docile. The girl is supposed not only to primp, and dress herself up but also to repress her spontaneity. She is. to substitute her fears for the grace and poise she has been taught by her elder sisters. Any self-assertion will take away from her femininity and her seductiveness.” This has been the belief since centuries on hand, where women are supposed to maintain their “sanctity” while men are free to express themselves. The notion of patriarchy holds that the more women a man can lure, the more masculine he becomes. And masculinity equates to power. This stereotype that men are stronger than the opposite sex emerges from the long-believed thinking that normality is defined by women in positions, of caregiving and being meek, whereas men have to be the bread earners and protectors of the family.

These gender-specific norms have served the purpose of glorifying heterosexual men who appear to be “masculine” because they refuse to be emotionally vulnerable. Society has placed this taboo on men that, they have to support women, and they cannot do it if they’re emotional. A man who cries or expresses his emotions is often termed as “feminine” and “emotionally weak”. There is a sense of weakness associated with being emotionally charged, and to a simple expression of merely crying. According to patriarchal belief, women cry, not men.

We, as a society, have normalized the term “gender” to arise from the differentiation in “sex” which is thought to be natural. This notion perpetrates the belief that it is natural for people to be born as men or women, leaving no scope for acceptance for the other genders. Judith Butler argues that gender does not arise from sex, rather sex is made to look natural because of the societal definition of gender. Society has over the centuries normalized the way women are supposed to dress up and how it is normal for men to be shirtless in public, but women have to cover up their bodies. These distinctions are carried forward to define gender roles too, where certain behaviors are appropriate for men while the same is shameful for women to portray. And it is due to these differentiations that society has created, and we have normalized the stereotypes among genders.

The massive global ‘Free the Nipple’ campaign runs to empower all genders and states that women's breasts are not sexual organs, and if men are allowed to uncover their upper bodies, so should women be able to. There is a mystified, sensual sense associated with the bodies of women which are covered. There is the curiosity to know the “unknown,” and it is associated with what is sensually appealing, and what is not. When women, are defying conventionalized beliefs and reaching phenomenal heights in fields like science and sports, which have always been, thought to be the domain of men, and on the other hand they are vilified and sexualized by the other gender.

It is a paradoxical world where massive campaigns are run to celebrate how women are empowered, and at the same time, women have to fight for pay disparity, having the freedom to walk alone at night, and the constant need to prove their capabilities because society has established that women cannot be smart in fields of finance, banking, engineering, etc. Women are often, meant to take up Liberal Arts because that is believed to be easy and in sync with the household chores that are solely a woman’s responsibility. This has given rise to the concept of gendered occupations, which in turn solidifies the belief that men and women have different intellectual capacities. And hence, they choose different career paths.

41% of the global labor force is comprised of women, while the jobs that are given, to them contribute only 37% to the Global GDP (McKinsey 2015). This is due to the over-representation of women in part-time jobs, and the low productivity sector. This is evident from the UN Women report, which shows, that there is a 23% Gender Pay Gap worldwide. Men are preferred in highly productive, output generating jobs over women because of many stereotypes, among them is the fact that employers have to give paid leaves to women if they’re pregnant.

The economic and professional burden of bearing a child is much more on the mother than on the father, who has little or no effect on his professional life. Maternity leave discriminations result in almost 54000 women losing their jobs each year, just in Britain, which is double the number than it was in 2005. Moreover, women returning to work after a child are more prone to face discrimination now than they were ten years ago, according to the Equality and Human Rights Commission.

It is true that we, as a society, have moved ahead, and the condition of women is slowly but surely better in many fields. However, this cannot be allowed, to overcast, the core human rights still denied to women. There is a long way to go before we can assert with utmost surety that women are equal to men in every aspect of their professional and personal lives, and only then can we quash the rigid standards of gender roles.

Global Citizenship: The key to a peaceful future