Globesity or How to Make Profit on People’s Health 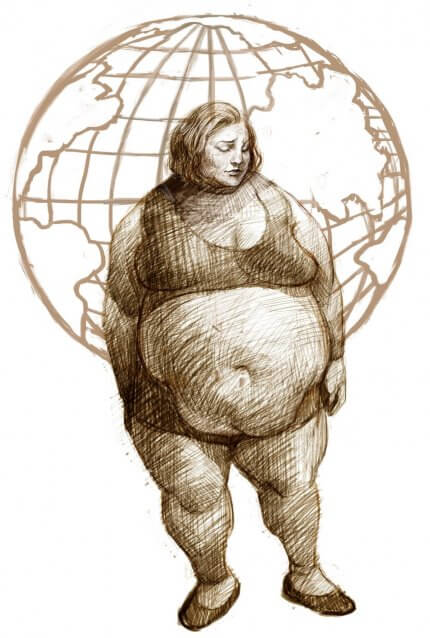 The word "globesity" is not a new buzzword. It was created in 2001 by the World Health Organization to describe the rampaging phenomenon of obesity around the world, mainly in the developed one. The concept was linked to the globalization of the Western food market based on the promotion of starch and sugar-based products. It is a serious phenomenon that is often presented as the result of solely psychological conditions that lead individuals to overfeed themselves. Unfortunately, this is not often the case. Globesity, when properly analyzed, reveals the perverted logic of Western market rules and dynamics that demand the utmost attention. Accordingly, the ubiquitous invisible and subtle market dynamics are elaborated in such a way to work constantly on people's subconscious while exploiting the dire socio-economic conditions created by the unregulated market policies implemented over the past decades.

Fortunately, many documentaries and TV programs are currently being produced on this serious topic to sensibilize people. To get an idea of the importance of this phenomenon, a good starting point is an excellent documentary published in May 2022 by the German channel, Deutsche Welle. The documentary tried to unveil and highlight an important notion, namely how people’s food habits are not based so much on freedom of choice as the multinational food corporations try to convey constantly. Instead, these choices are mainly the result of the exploitation of a huge segment of the population made up of low-income individuals that cannot simply afford healthy food.

As the documentary rightly explains, the obesity curve started to rise in the 1980s after certain political-economic decisions were successfully lobbied by the sugar industry. This was made possible through the exploitation of a specific narrative. Accordingly, fast-food, and cheap high-sugar-based food companies managed to deliberately promote the wrong idea that a high-fat diet based on meat consumption was the main cause of cardiovascular diseases. Consequently, they purposefully maintained that a strongly starch-based diet would be the panacea for the body. This entailed the quick expansion of a food market based on highly-processed sugar-based foods as a strong replacement for meat fat.

As a study released in 2014 suggests, while obesity and diabetes are often the results of genetic predisposition and propensity to gain weight, several structural environmental and societal changes whose inception date back to the 1980s should not be neglected. The study defines this new environment as an obesogenic one based on the large quantity of high-calorie, low-quality food and reduced physical activity. This leads to a global health problem.

This research, though, is not limited to the medical explanation of the problem. An interesting point is made also concerning the unregulated marketing and advertisement sectors that promote people's constant addiction to this deleterious food, but also to the policies implemented in the past four decades that produced economic stagnation and lower wages, leading to a visible cleavage between the rich and the poor.

In this regard, what made this successful was, and still is, the fact that these products are incredibly cheap. And this is not difficult to understand as this stand in front of everyone’s eyes when one visits a supermarket. Healthy foods like fruits and vegetables are much more expensive than their sugar and starch-based counterparts, and for countless low-income households, they are often a one-way solution. As the DW documentary points out, as Western consumers, particularly in Europe and the US, are now better informed on these issues and fare economically rather well, it is now the developing world that has become the ubiquitous food corporations' main goal. Not coincidentally, the example of Latin America, especially Mexico, is brought up as a country where the consumption of sweet drinks is reaching alarming levels.

Nevertheless, large food corporations know that the scientific community, as well as famous individuals, are raising the alarm about the dangers involved in the consumption of this kind of food. This is why, throughout the past few decades, they have tried to show a more benevolent face through targeted campaigns. Giants like Coca-Cola, Kellogg’s, Unilever, Nestlé, and several others started to promote the narrative that through constant physical exercise and burning calories all problems could be avoided. This action was necessary to somehow reduce the intensity, if not silence altogether opposite messages coming from influential people like Michelle Obama. Accordingly, during her husband's presidency, Michelle Obama promoted a campaign against obesity by promoting physical exercise and pointing out the need for a more balanced diet and healthy food.

Notwithstanding this, scientists, at least the ones working with independent funds, are still warning against the fact that burning calories is not the solution. As the incredibly high amount of sugar introduced into the body keeps the insulin level constantly high, this, in the long run, can bring on several diseases, with type 2 diabetes being at the top of the list. In addition to diabetes, obesity causes hypertension, coronary heart disease, stroke, gallbladder disease, osteoarthritis, sleep apnea, several types of cancer, clinical depression, low quality of life, and difficulty with physical functioning. In other words, this food is not only a threat to our health but to our very existence. And the most worrying fact is that more and more children are becoming obese while they turn out to be the first victims of even more invasive advertising policies on cheap food.

In this regard, statements like the WHO’s about the fact that obesity occurs when people consume more calories than they burn and that if they consume less food and move more, they can avoid obesity are very simplistic. The documentary is adamant in saying that we are not so free to choose as the system wants us to believe. What choices can an extremely low-income family have when cheap food costs much less than fruits and vegetables? Because this is the bitter reality. Healthy foods like the above-mentioned but also biological and organic ones, often promoted by apparently good-hearted Hollywood and Instagram stars, are unaffordable for many. How can people believe that a $1 cheeseburger can be beneficial to their health? It is obvious that many people know the truth about the dangers involved, but, unfortunately, their wallets do not allow them to make the radical change they want to improve their lifestyle and health. But who is responsible for this? The same market mechanisms that regulate food corporations of course. These, with the connivance of politics, work constantly to ensure that economic stagnation is kept unchanged so that more and more people can buy cheap food.

Unfortunately, while we cannot exclude that for some people food habits can be a choice, for the majority, it is not. Very often, it is the system itself that leads people to their own death. It is almost hilarious, if not tragic, to read numerous WHO statements about the problem of obesity: "In 1995, there were an estimated 200 million obese adults worldwide and another 18 million under-five children classified as overweight. As of 2000, the number of obese adults had increased to over 300 million. Contrary to conventional wisdom, the obesity epidemic is not restricted to industrialized societies; in developing countries, it is estimated that over 115 million people suffer from obesity-related problems."

While the organization acknowledges the social and psychological dimensions of this condition, as well as the fact that the issue is now concerning also developing countries it does not comment further on the possible causes. And how could it? It wouldn't be an exaggeration to state that this, as well as several other organizations that shape the thick net of the widely praised neoliberal globalized world, are well-aware of the invisible underlying mechanisms that regulate the market. Everything is clear to everyone, but action cannot be taken because the élites work under only one banner: profit over health.