Half A Million People in Dire Urgency! 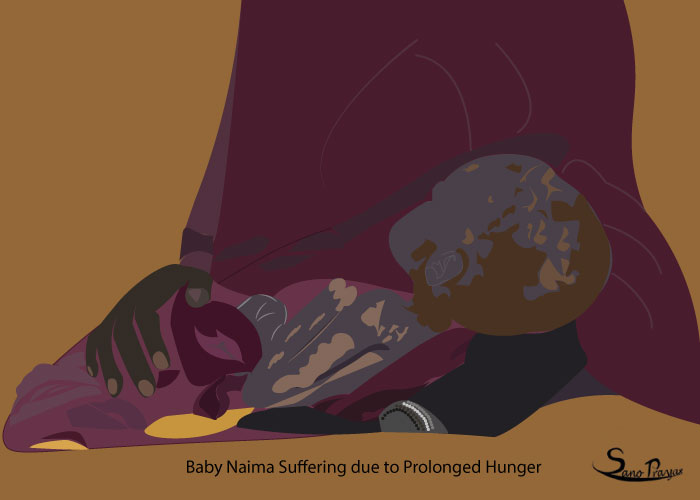 You may have watched the viral video of children being forced to eat ‘Mud Cookies’ in Haiti due to hunger. It surely made you feel guilty about wasting food (if you ever did). Famine is something that most of us have never probably seen closely. We as the privileged ones have heard, seen, or read of it only through our devices but the people in Somalia are actually facing it.

It is predicted that half a million children under 5 may die due to this. I hope you want to immediately help and donate and if you are not there yet let me tell you stories of children there where you start bawling with tears. (Caution: stories may be too graphic for some)

Somalia is crippled with heartbreaking stories

According to BBC News, the ongoing crisis is heartwrenching in Baidoa, Somalia. Naima, a 2-year-old girl is seen struggling with severe malnutrition. In a nearby hospital, her mother tries to save her, and her malnutrition is extreme, she looks like a burn victim. The prolonged starvation is reacting aggressively to her body.

Horrific stories where mothers are forced to leave their children to save other children. A 30-year-old widow named Keerey Ibrahim Idris has seen her two children dying. The starvation caused her to take a bold decision to trek for 3 days with her ten children without shoes to Baidoa. The day they arrived, her 9-year-old daughter collapsed starving. Another 2-year-old was malnourished and died from catching measles too two months later.

In another story, Sontoy Mursal, who is not far from Keerey’s camp, shares that Abdullahi was her favorite of all the eight grandchildren she loved. He was sweet and polite and was always ready to help when called. She had a special bond with him. The family lived in a farming area and had enough to eat until the rains repeatedly failed and the movement of their goods was restricted by a militant group al-Shabab which made them decide to trek brutally for 2 weeks (about 100km) to Baidoa city. He died during this journey.

The many stories of the worst battle to starvation are more or less similar to the above-mentioned stories.

What is Happening in Somalia?

While famine of 2011 had been a terrible period for Somalia, the report says, there are warnings that this famine is worse than that as it has affected twice the population of 2011 famine. The famine in 2011 was due the third failure of rainy seasons but the one happening is due to the forecasts of fifth consecutive failure of rains in the region. The Horn of Africa, is hit the hardest with the famine and is projected to reach Baidoa and Burhakaba districts if the human assistance does not reach those most in need according to the same report.

Hence, appeals of ‘Massive and Urgrent appeal of donations’ are the only hope to survive this level of starvation. The famine is predicted until December this year according to Aljazeera.

UNHCR reports large areas of south-central Somalia are widely controlled by the armed group Al-Shabab, killing many people and terrorizing people there. They have also made local farmers pay hefty taxes. Additionally, the conflict and war have made it extremely challenging to reach those vulnerable. All of these factors have played part in escalating the inflation levels there.

Meanwhile in Our Part of the World

We have choices of what food to eat, the type of menu, type of services, and can eat anywhere we like. We are incredibly privileged to get such variety and more than sufficient resources to choose and pick our favorites. However, all of these have come at their own expense. We know and see a large amount of food being wasted and thrown away as the customers' demand was fulfilled and the rest is not needed. Supermarkets and restaurants, bakeries, cafes, and so on all over the world throw parts of their prepared food, unutilized stock, and other resources that will not be used by any customers or the business. We even waste food in households. WRAP states globally 25-30% of food produced is lost or wasted.

Research suggests the UK produces 9.5 million tonnes (Mt) of food waste, 70% is intended to be eaten and 30% inedible parts. The food (6.4 Mt) would make 15 billion meals. The UK also has 8.4 million people living in food poverty and could benefit if food waste is utilized to its capacity.

How fair do you think it is? Half the population in one part of the world is facing famine or dying of hunger and thirst while in another part of the world there is so much food and resources thrown polluting and impacting greenhouse gas emissions.

Massive and Urgent Appeals are a Must!

Prioritizing those vulnerable to extreme poverty, malnutrition, pain, and suffering, Somalia can be helped by every one of us through organizations like Concern Worldwide (UK). Too good to go is an app in efforts to reduce food waste around the world. Efforts like wastemanaged, and WRAP collaborating with local, national, and international organizational, individual, and group efforts are urgent to aid Somalia to survive the desperation of hunger of the century. According to Aljazeera, the UN suggests that at least 1 billion aid is required as nearly 80 million are at risk of dying from famine-related deaths.

We can’t just pray and watch when we can take action by reaching out to various organizations who are trying to help reduce the scale of impact of drought and starvation.

We hope to make you aware of the worst famine of the century and hope to highlight the appeals made by various organizations for humanitarian assistance.

Your thoughts, shares, and donations will be appreciated.