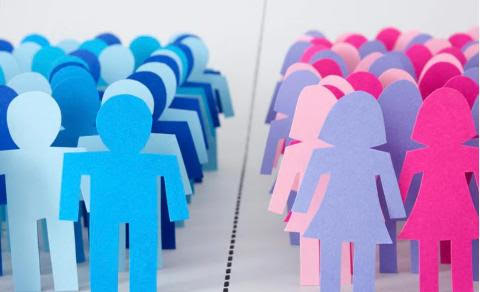 Gender is the state of being a male or female. It is the way society creates, patterns and rewards our understandings of femininity and masculinity or the process by which certain behaviors and performances are ascribed to “woman” and “man” (Women's Voices, Feminist Visions: Classic and Contemporary Readings, Shaw and Lee). The meaning of femininity and masculinity varies in different societies and periods but also shapes our ideas on how to live up to gender norms. What we see and know attributes to the behaviors of our particular sex.

According to the textbook definition of gender assignment, there is evidence to suggest that as soon as we are born we begin to learn about our gender. When we are born we are given a specific physical body type and a name. These characteristics determine whether you are a girl or a boy. Today’s names have been conformed to fit every gender. Names aren’t the only attributes that confirm gender. Clothes and colors have also been influences in this. For example, the notion that girls wear pastel or bright colors, specifically pink. While boys are associated with darker, bluish colors. Then at the age where you’re able to play with toys, you notice that girls have barbie dolls and boys have cars. This idea of gender norms becomes complicated once a child grows up and passes puberty. The hormones react differently, the tone of voice changes and your body begins developing. We begin to decide who we want to be.

People tend to forget that there’s more to gender than just what kind of person you are. Gender ranking is the value of one gender over another (Women's Voices, Feminist Visions: Classic and Contemporary Readings, Shaw and Lee). These values vary with race, ethnicity, class and systems of inequality and privilege: masculinity is valued over femininity, economically privileged women are valued over poor women and abled women are valued over disabled women. This further proves the economic and social entitlements.

For example, “African American women may be characterized as promiscuous or matriarchal and African American men are described as hyper-athletic and sexually potent. Jewish women are painted as materialistic and overbearing, whereas Jewish men are supposedly very ambitious, thrifty, good at business, yet still tied to their mothers’. Latinas and Chicanas are stereotyped as sexy and fun-loving, and likewise, Latinos and Chicanos are seen as oversexed, romantic, and passionate. Native American women are portrayed as silent, overworked, exotic, and romantic, whereas Native American men are stereotyped as aloof mystics, close to nature or as “savages” and drunks. Asian Americans are often portrayed as intelligent and good at science and math, while Asian American women have also been typed as exotic, passive and delicate” (Women's Voices, Feminist Visions: Classic and Contemporary Readings, Shaw and Lee). Most of these accusations are the stereotypes that shape regimes of power and truth.

Other examples included how certain women completed domestic labor and the norms of privileged people. “Upper-class femininity meant that there were certain jobs that privileged women could not perform” (Women's Voices, Feminist Visions: Classic and Contemporary Readings, Shaw and Lee).  Many have experienced how gender roles and expectations have shaped my life. People grow up with different gender expressions. Some grow up in a traditional home, where each value or rule was and still is followed one specific way. Nothing in that household is ever changed. From the time one is born, he or she is expected to act as the gender they are born to be.

Respect is typically given to females when presenting lady-like manners, dressing appropriately, staying fit, creating a family and obtaining an education. Many of these steps are continuous by each generation of females. This generation of millennials has changed that game. For example, many of the women in my family do not live up to the expectations of the elders. Meanwhile, men get overlooked when it comes to situations like this. The gender roles and expectations in my family have cultivated my life into making me afraid of changing who I am because I tend to want to please my family in any way possible. Not only just pleasing family members but also friends, strangers and most importantly myself.

With all situations in society today, I have yet to change my mind about who I am. It is gender aptitude: the state of being a male or female with a natural ability that makes it easy to do something well. It may be difficult to find, catch, or achieve; but it is an accurate reflection of who we feel we are, by our attitudes, careers, relationships, politics and sexual preferences. It is to say that many are gender novices. The ones that have not had experiences with other genders are new to it--new to the circumstances of gender norms.