How Westernization Exists In Indian Culture? 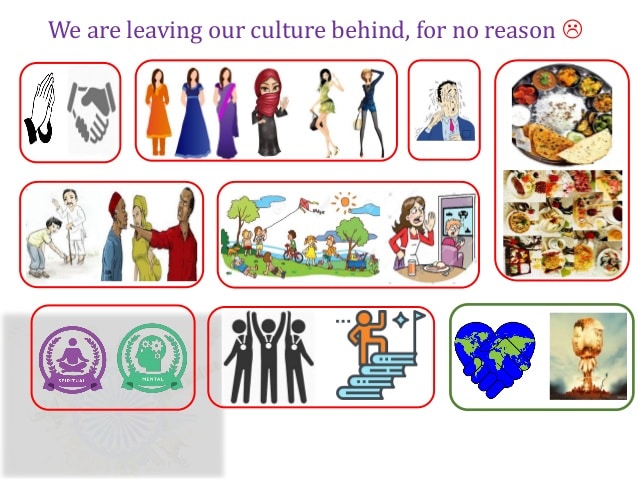 Lakshita Chauhan acknowledges – ‘ Adoption of determination but maintaining the legacy of tradition is a perfect blend and balance.’

Your daily spaghetti and coffee breakfast – can be aloo ka paratha and chai, the toothpaste and brush you use can be just neem branch instead. The face mask you use can be besan ( gram flour ) and Haldi ( turmeric ) instead. The shirt you are wearing above jeans can just be a cotton Kurti or Saree. Your Talyor Swift or Michael Jackson playlist can also start with Jashn-e-bahara or Lata Mangeshkar. Your John Green novel can precisely not give you as much comfort as Chetan Bhagat can. Don't you agree?

There’s no qualm that we have westernized ourselves with the maturing generation. Apart from knowing the westernization, we kept rubbing our culture- until it began to fade. The satire that ‘true beauty of our culture is unknown ‘ is becoming the truth now. As a familiar illustration; speaking English is viewed coeval while people judge us before using Sanskrit -more like a dialect in a deserted jar. The person uttering in Hindi among English professionals is been looked down on. Where do you see Indian culture in the coming 10 years?

Swapping to spoons stands for a high-class and brushing with artificial chemical pastes whereas the ingredient is basically neem. Yes, western tradition does have boons but imposing it on the Indian tradition is not fancy.There are always radical preys to westernization . It dates back to the 18th and 19th centuries of British India when people followed ideas like "Whiteman's burden ", technological and administrative changes brought modifications in society also giving rise to the adoption of English in India.There are instances like Sherwanis were a part of Mughal Ethnicity but apparently, with time it merged into Indian cultures and today none would recall its origin.

1.We have switched to English-talkie-culture and barely value the regional or antique languages ( like Sanskrit, ancient Hindi). How many bookstores/stalls will you find in India selling the majority of Hindi upanyas or scripts.

2. Our class is standardized by using spoons in parties or restaurants, not with comfortable hands. Our freedom fighters taught us to make India our home, whereas we trade personalities when at home and when we go out - just to project an essence of eliteness or organized virtues.

3.We believe urban flats, apartments, sparkly city lights are way too attaining than mud houses, kutcha houses, etc. A new era has indeed brought a new level of demand for comfort. But where is your Namaste , when you meet Urban peoples? It's always about Good morning and hello first! Not Namaste.

4.Our shopping carts have 100% artificial products and barely some of us are reliably supporting #vocalforlocal or local breadwinners. How many of us buy authentic ethnic cotton, jute, khadi, or woven clothes from the market or online shops? Along with the clothes, the dress sense has also altered. We like to copy foreign fashions, huge MNCs settling in India made Indians follow or observe their attitudes ( dress codes) instead of discovering our cultural ethnicity/fashion. Similarly, consumerism is easy when it's from an exotic brand and mark .

5.I know it's not the 90s but we switched to web series - Kdramas- movies and subscriptions, influencers are representing India today but none ever thought of puppet shows that existed.

6. A country full of respect, morals, and ethics - carrying the history of one of the biggest empire ever had been under patriarchy since the British rule and systems like dowry, sati or superstitions led education gender rights started disconnecting or distancing us. Till today, when we are attempting to erode patriarchy -men's right has also become questionable. The influence of modernization has led genders to a stage of confusion.

7. The Indian traditional cuisines are replaced by exotic dishes and treats- do you still think French fries or Pizza is an Indian invention? It's good to share cuisines but when pizza becomes a dominating snack over your vada or pyaz ke pakore - you have to realize.

8. We started giving a fresh spot to Halloween day, New years eve, Valentines day in the majority. While there are concerts and ips instead of religious bhajans or lane get-togethers. Likewise, at the rate people are westernizing traditional marriages in India, it might be we unlink the true meaning of religious customs or promises.

9. Bollywood has started portraying the new generation of females by bringing foreign culture as a fancy stature.

10. Traditional sciences like Ayurveda and yoga are yet exploring a way to reach us, whereas we are joining gyms or paying foreign physicians.

Keep calculating more instances, I know there is more curry to spill! The globe has countries separated by physical boundaries, yet we all are adopting each other's cultural and social lifestyles while there is something called uniqueness we must value - of each nation. This article doesn't criticise westernization instead it's trying to point out where India is losing its unique cultural or ethical existence. None is imploring you to abandon the western culture, but our priority is to grow our diverse culture as our first pride - since we are all born in the motherland of diversity and love.

The meaning of culture in our time