India in the Middle of the Russia Ukraine Issue 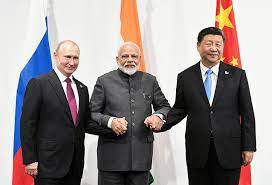 The Line of Action

Russia has sent its troops to Ukraine for 'peacekeeping' and the civilians of Ukraine are being trained for military action, so the situation isn't all hunky-dory in the Ex-Soviet Union. Vladimir Putin announced his move in an unscheduled TV address and expressed that any move to interrupt this Russian action would lead to dire consequences. This had been brewing before Christmas last year and the US President warned Russian authorities that if any invasion is done in Ukraine the US and its allies in the EU will respond with strong economic measures. If we trust the American Intelligence then the war was to be started on 16 February but Russia did not take any action then. Some experts believe that China wanted the Beijing Olympics to be concluded in peace and Putin respected the Dragon's wish.

Whatever the reason might be there was no invasion and the Russian authorities commented that the US was just trying to make a sensation in the world and there were also claims of Russia's apparent de-escalation. A day after the Beijing Olympics ended, on the 21st of February made the explosive declaration of recognising the independence and sovereignty of the Donetsk People's Republic and the Luhansk People's Republic. These areas belong to Ukraine on paper but are controlled by separatists and are also called Russia Occupied Ukraine. Russia supported these separatists in all ways possible since their inception and even provided them with free vaccines in the pandemic time. To maintain peace, the Minsk Agreement was signed between them in 2015 by which Ukraine had to provide special status to these regions. Russia now has nullified the agreement and the world fears that it will occupy the whole territory of Ukraine.

The World's Reaction to Moscow

Russia has had a history of such invasions to its neighbouring countries in 2008, areas of Georgia (a total of 20% of the country) was occupied followed by Crimea in 2014. A big chunk of Moldova, known as Transnistria, wants to reunite with Russia. The last dictator of Europe, Lukashenko of Belarus is also under Russian influence. Such modern imperialism is a threat to all countries. War is not the best option although NATO has deployed 5000 troops to Poland as a safety measure. There are 4000 troops on standby which can be sent to countries like Romania Bulgaria Hungary and Slovakia if required. But the ground reality is Russia's active soldiers are four times that of Ukraine's and five times more tanks. Ukrainian citizens are also gearing up for a fight, according to estimates if there is a direct war more than 50000 civilians would be killed. Thousands of people would have to leave their homes and their condition would perhaps be the same as in Syria. Most countries have slapped sanctions on Russia over its troop's deployment to breakaway regions of Ukraine to discourage it. Putin is under significant control of the Russian oligarchy consisting of bankers and businessmen billionaires so they have been targeted. Germany has taken the biggest bet by stopping the certification of the Nord Stream 2 pipeline. This is dangerous for its economy too as fuel prices might skyrocket.

What Can We Do?

The Indian representatives called this a "matter of deep concern" but avoided giving a direct stance. The government's immediate responsibility is to ensure the safety of Indians currently in Ukraine. The medium-term concern is petrol prices, the latest survey estimated that the petrol prices would be about $65 to $70 per barrel during this year but now this price has reached almost $100 per barrel. Is the second-largest oil producer in the world and hence such sanctions may only increase the price further. The budgeting would be compromised and the Indian government would have to spend more money on the LPG and kerosene subsidies. The long term impact would be on our military. India is hugely dependent on Russia for military supplies and especially with the less than favourable conditions on the China border, it would be a tough gamble. The Russian-Chinese friendship is also deepening right now as both countries are relishing their communist past. Both are also being isolated by the US and in such circumstances their bonding is predictable. Although Russia has been a trustable ally of India in the past, China seems to be an exception. In the 1962 war, Russia had supported China and not India. Nikita Khrushchev, the president of the Soviet Union during the 1960s, told China that the Soviet Union would support their 'Chinese brothers' instead of 'Indian friends'. So this is a tightrope walk for India and we must tread carefully.