Indian students: Parent's Will VS Student's Will 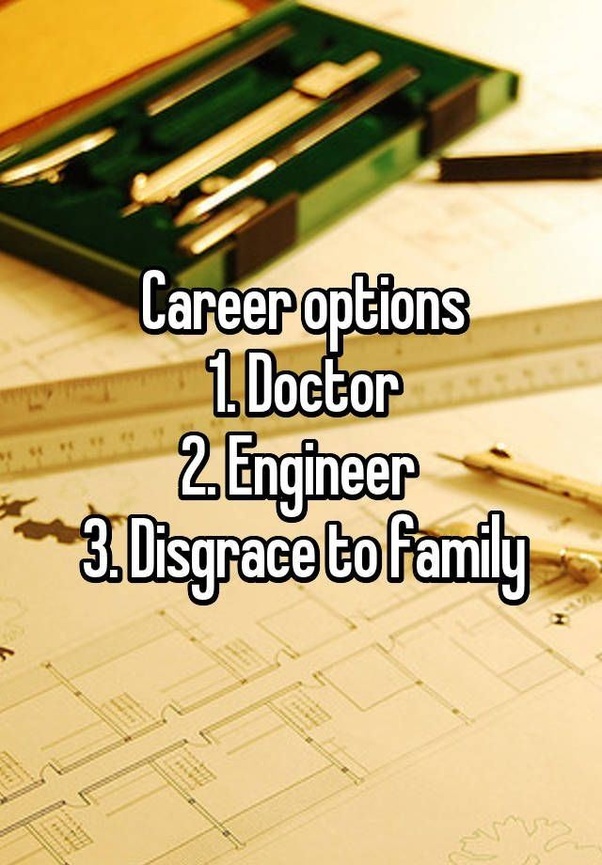 After the independence, India was a very under-developed country in regards to its counterparts. For the growth of a country, India needed to have a large number of Engineers and doctors. People were pursuing these two fields in a rare amount at that point. Government launches many schemes for the people to join these courses. In the 70s, Industrialization took a wave in the country by introducing many job opportunities. During that period, many people who join and learn the degree in these two fields are now at a top hierarchy of societal status. The transition from a lower class to an upper high zone is very smooth. ‘Stability’ and ‘Security’ which a person wants in a job are easily acquired in these professions. Hence, the trope begins. One who earns a degree in the science field is very knowledgeable and admirable. Even now 21st century India, this tradition goes on. Every Indian parent desired their kid to go and earn a degree in these fields. So, they can live a desirable life in society. By doing so, their future family will luxuriate from the social standing. They incepted their kid’s brain from very starting by showing examples of a relative, acquaintance, or even their own who study in engineering or doctorate and now living very lavishly.

That’s why we always hear from a child that they wanted to become a doctor or an engineer when they grow up. Right now, 90% of students in India chose the science field after the 10th class. Mainly because of their parent’s wishes. There are multitudes of career options are available in the country but our education system did not provide the magnitude to reach that information to students. Students are most often just confused about what to choose. Through the years of portraying science as the safe bet for the future and their parent’s wishes align with that made them take that course of a ship. After reaching on sensible age, they learn about their interests and aspirations, and later they always regret their decision.

Topics like parental pressure, societal pressure, student suicide, depression, etc, are explicitly shown in mainstream Indian movies like 3 idiots, chhichore. In 2016, a 17-year-old girl in Kota took a step of suicide as her parents pushed her to study engineering while she wanted to pursue BSc. In her suicide letter, she wrote to her parents for letting her younger sister seek whatever she wanted and not like she has treated and forced. Data reports from NCRB recorded in 2018 that 10,159 students had committed suicide in India mainly due to parental and societal pressure. IITs and IIMs have at least 60 students committing suicide. Out of 23 IITs, 12 had reported 50 cases of suicides. Log kya kahenge mentality is highly responsible for all the pressure a kid had suffered from their parents or society. It is also the main reason a person stays in the job while being highly dissatisfied with it.

Due to the limited exposure of different career options, pressure from parents, and longstanding societal biases in terms of streams making it hard for students to take a path that they want. If they do take their dream path, then they face prejudices about the career in regard. It’s high time to break those old age notions about a career that is not an engineer and doctor. These jobs are known as non-paying jobs. We have far more engineers than we required. It can be verified by unemployable persons seeking jobs in the market. Often skills such as cooking, singing, dancing, acting, drawing, writing, and others are dismissed as a ‘hobby’. Our parents likely said that you could pursue your ‘hobby’ with your job also. But what they do not understand that these things can become a very stable career option.

Many people, now pursuing a career where they found satisfaction and happiness rather than wanting stability and security as a prime source. We didn't have our captain cool if M.S Dhoni stayed as TTE in Kharagpur railway station. What about our Millenium star Mr. Amitabh Bachhan if he worked as a radio jockey in All India FM. Then, all his great performances would never come to light. And we forever are deprived of his great cinematic acting. We do have our prime minister Narendra Modi because he shifts his career from a tea-seller to a great politician the world-known him today. Sonia Thiyam is a beauty blogger and handled brands like Gigi Hadid and Balmain, but she was a doctor by a degree. She has a very stable career as a doctor. However, she was not satisfied as her heart always belongs to the fashion industry. Like her, Sandeep Sreedharan owns a restaurant named "curry tales" in Mumbai. He was a senior manager in a consulting firm but decided to change gears after 15 years of working as he is always fascinated by culinary arts. One of the famous wedding photographers in India, Devendra Purbhiya has a degree in engineering from Kharagpur IIT and he also had worked in Samsung India. Other people like Robin Keshaw goes from software engineering to Educating disadvantaged kids, Vikramjeet Singh is a standup comedian who has an engineering degree from Manipal Institute of Technology, Furniture designer Nayantara Kochhar has worked for 6 years as HR in a corporate company before launching her design firm 'Auraz Design' and many more. More People are not going for traditional career paths but opting for where their happiness lies. They want their parents to support their wishes and put their beliefs on it. Parents should not look at the achievements of Sharma Ji's kids instead saw the happiness of their kids while they do what they want.

Every field of study is unique and complex in its way. Every specialization required efforts and knowledge and has its own sets of difficulties. So, rather than the popularity of one’s career, allow your kid to follow their interests. Rather than focusing on who earns more, see the smile and satisfaction in a person’s face when they did something they love.