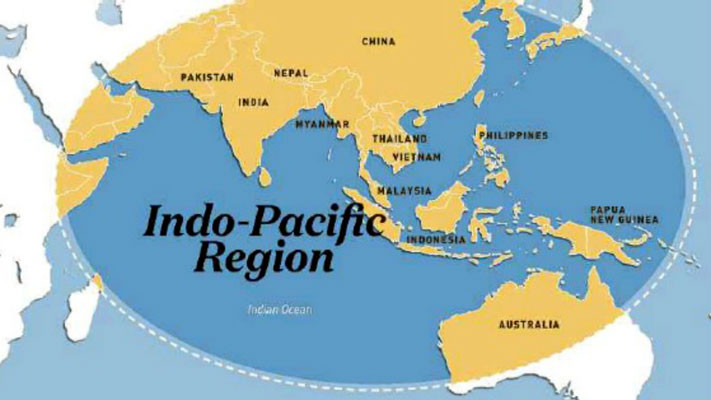 Indo pacific means India, the United States, and other Asian democracies, especially Japan and Australia, will join in curbing China in the new framework of ‘cold war’ influence.

Which is the Indo Pacific Region

Indo pacific or Indo pacific Asia is the biographic region of Earth’s seas comprising the tropical waters of the Indian Ocean, the Western and Central Pacific Ocean, and the seas connecting the two in the general area of Indonesia.

The countries of Indo Pacific Region

Conceived and led by the United States, it has thirteen founding members including Australia, Brunei, India, Indonesia, Japan, South Korea, Malaysia, New Zealand, the Philippines, Singapore, Thailand, and Vietnam. But mainly, it consists of four big economies. They are the USA, China, Japan, and India.

The Importance of the Indo Pacific Region

Economically, the Indo-Pacific is the center of global trade and commerce and hence, a potential area of economic prosperity for the countries in the region. It accounts for 65% of the world’s population, 63% of the world’s GDP, and 46% of the merchandise trade.

The strategy of Indo Pacific Region

It outlines president Biden’s vision to firmly anchor the United States in the Indo pacific region and strengthen it in the process. Its central focus is sustained and creative collaboration with allies, partners, and institutions within the region and beyond.

In this, India’s strategy will continue to build a partnership in which the United States and India work together and through regional groupings to promote stability in South Asia; collaborate in new domains, such as health, space, and cyberspace; deepen our economy and technology cooperation and contribute to a free and open region.

It is important to India because it provides a geographic and strategic expanse, with the two oceans being linked together; by the ten Asian countries. Security in the region is a must as through dialogue to ensure certain rules-based order, freedom of navigation and impeded commerce as per international law.

India was among the initial partners that signed up in Tokyo recently for the Indo Pacific economic framework for prosperity proposed by US president Joe Biden to counter China’s growing influence in the region.

Endorsing this initiative, India’s Prime minister Narendra Modi committed to working with all Indo pacific countries, for an inclusive, and flexible Indo pacific economic framework. This also declares that the foundation of resilient supply chains is a major focus area for the framework, which will provide an alternative to China’s approach to critical economic issues (of trust, transparency, and timelines) that will strengthen and pave the way for development, peace, and prosperity in the Indo Pacific region.

These partner countries together account for 40% of world GDP. Biden said they were writing the new rules for the 21st-century economy, which will help their economies grow faster and fairer.

The US commerce secretary said that the partner countries would look for a business alternative to China, and Indo pacific countries’ framework would be a more reliable partner for US businesses.

The pacific region partners plan to follow a US plan ‘blue dot network’ to certify infrastructure projects against a set of criteria and standards, that was launched by the US, Japan, and Australia in 2019.

The Australian Citizens Party, a minor third party criticizes the ‘Indo Pacific’ vision as a re-enactment of Nazi strategy given the concept link of Karl Haushofer. Also, former Prime minister of Australia Paul Keating criticized the notion of ‘Indo Pacific’ as a construct of the United States in its diplomatic war with China.

The challenges facing the Indo pacific pact are the economic coercion of Australia, the conflict along the Line of Actual Control with India, the growing pressure on Taiwan, the bullying of Japan, and ASEAN countries in the East and South China seas.

Since 2011 the term Indo Pacific is being used increasingly in the global strategic/geopolitical discourse. As a framework, the Indo-Pacific seeks to create a connected multi-polar region that must be governed by commonly agreed international norms, rules, and practices.

Tackling China’s assertiveness, the US administration announced the long-awaited Indo – pacific strategy that focuses on building collective capacity to deal with challenges in the region. These include: A focus on challenges from China, advancing the US relationship, ‘a major defense partnership’ with India, and its role as a net security provider in the region.

There is an emphasis on working with other countries not just from the region but also from beyond. The European Union announced that it will reinforce its strategic focus, presence, and actions in the Indo-Pacific to contribute to the stability, security, prosperity, and sustainable development of the region, also investing in civil society, a free press, and free and open democratic institutions.

The US says it will work in flexible groupings to tackle major issues, particularly through the quad, and also deepen its regional treaty and work with groups such as ASEAN, The European Union, and the NATO. The US has also announced that ‘integrated deterrence’ will form the ‘cornerstone’ of the US security plan for the region. It will drive initiatives that reinforce deterrence and counter opposing efforts to alter territorial boundaries or undermine the rights of sovereign nations at sea. It plans to work with allies and partners to develop 2030 and 2050 targets, strategies, plans, and policies consistent with limiting global temperature increase, thus reducing the regional vulnerability to the impact of climate change and environmental degradation.