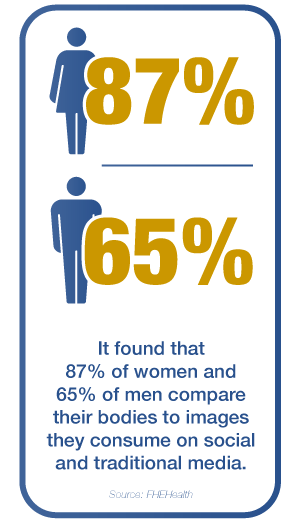 Social media can be harmful to one's body image. They are highly visual and interactive, with appearance being crucial to success. Collecting "likes" and followers is an immediate indicator of success and popularity. These have a direct impact on users' self-esteem.

Because social media is interactive and sometimes anonymous, feedback is immediate and unfiltered. There has been a lot of negative feedback and criticism. This increases the emphasis on appearance and the competition to outperform one's peers.

The use of social media frequently revolves around appearance. People spend a lot of time comparing how they look to others - friends, peers, and celebrities - and a lot of time talking about appearance. This could include conversations and interactions about attempting to lose weight or bulk up muscle.

This article will mainly be focused on Instagram, as it is one of the most used platforms in the world and the one which causes the more body-related insecurities, along with Snapchat (Time, 2017).

Instagram is the most famous photo-sharing platform in the world, with hundreds of millions of users who share, watch and comment on photos and videos every day.

Researchers showed that the two most common types of photos shared on Instagram are “selfies” ; photographs that one person has taken of oneself and uploaded to a social media website – and photos of friends (Hu, Manikonda, & Kambhampati, 2014; Ridgway & Clayton, 2016). Users of Instagram can not only choose the most flattering images of themselves to upload to the site, but also manipulate those images using filters to highlight their best features.

As Fleps cites, social media is shaping our perception of beauty. With constant exposure to images posted on the internet, it is clear that there is a link between how people compare themselves and perceive their bodies." (Fleps,2021). A negative body image can lead to unreasonable expectations of how your body should look, which can result in unhealthy eating habits and disordered eating.

According to research, there is a link between time spent on social media and having a bad body image. The association was notably strong when individuals were looking through appearance-related information on Instagram, such as fitness instructor or model accounts.

People on social media are always presenting their best version of themselves. Social media can then harm your body image by continually exposing you to the ideal body type, causing you to compare yourself to unrealistic expectations. Furthermore, photoshop and filters are widely available to users, contributing to an exaggerated body image.

Moreover, people who daily use and post on Instagram, tend to heavily rely on their Instagram popularity; an interview with an American designer revealed that girls tend to deal with eating disorders since when they were kids, and even delete Instagram “selfies” if do not reach enough “likes”, making them feel constantly anxious and unsuitable. (Emily Bringelson, associate designer, Fleming, 2014) .

Instagram studies have primarily focused on fitspiration photographs and content among the young adult demographic. Fitspiration is a lifestyle movement that encourages healthy living, mostly via diet and exercise.

According to the “Journal”, Instagram research found that among teenage users who reported suicidal thoughts, 13% of British users and 6% of American users attributed those feelings to their use of Instagram. Researchers discovered that making comparisons between themselves and what they saw on the platform had a particularly negative impact on young women's self-image.

CONSEQUENCES ON TEENAGER'S HEALTH AND WELLNESS

Sara began using Instagram in her mid-teens and found it useful at first. She used the photo-sharing app to follow fitness influencers, but what started out as a positive relationship with the platform turned into a body-image crisis. She was diagnosed with an eating disorder when she was 19 years old.

"I felt like my body wasn't good enough because, even though I went to the gym a lot, my body never looked like the bodies of these influencers," -Sara, now a 20-year-old recovering student-.

Sara is the exact example of how Instagram is ruining many young girl’s life, accidentally. Indeed, just like Sara, there are many other people struggling with this.

In the United Kingdom, two in every five girls (40 percent) aged 11 to 16 say they have seen images online that have made them feel insecure or less confident about themselves. According to Girlguiding's annual girls' attitudes survey, this rises to half (50%) among girls aged 17 to 21.

WHAT CAN BE DONE?

According to research, when users are exposed to a more diverse range of appearances, backgrounds, and body shapes and sizes on social media, their mental health and body image improves.

It's natural to be envious of other people's lives when browsing Instagram, Facebook, TikTok, or any other social media platform. However, envy can quickly turn destructive, harming your self-esteem, distorting your self-image, and disrupting your life. As a result, it's critical to understand that there are resources available.

In order to exit from the vicious circle of health problems, you should reach out for help, for instance looking out for people who can relate to your situation, and then contacting some specialists. Even knowing you're not alone in feeling bad or jealous after checking your social media accounts "can be a really therapeutic and a healing thing for teens and young adults who are struggling with this, ‘ according to Fenkel. Peer support can be formal, such as in group therapy, or informal, such as among your friends.’ (Chang-Cook A., 2021)

How can people avoid being negatively influenced by the content they’re subjected to on social media? Will this phenomenon badly evolve in the nearest future?

The Relationship Between Sports, Eating, And Body Image Disorders In Women