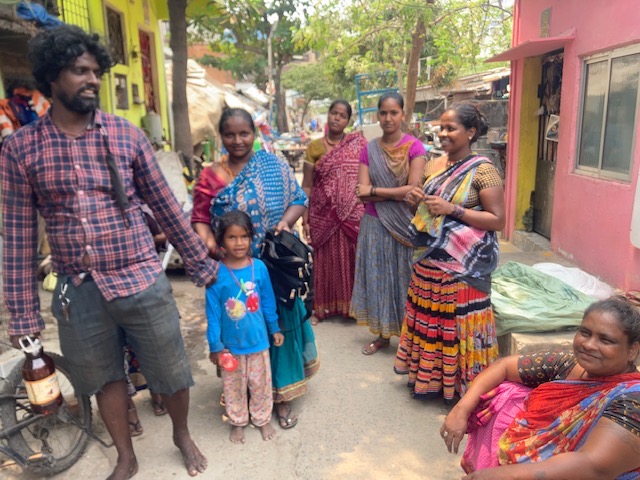 The community scattered in parts of the city doing odd jobs suffer from poverty and discrimination.

Narikuruvars, a poverty-stricken nomadic tribe living in a slum of  Periyar Nagar are struggling for survival as they lack basic amenities like clean drinking water and food. In earlier days, the community was primarily dependent on forest produce for their livelihood, but now many of them are doing odd jobs like cleaning, rag-picking, and fishing for survival. The people from the community earn money by picking up scrap metal from the road and giving it for recycling.

“We were born here and have been living here since. Our grandparents were living in this area. Since a child I have been selling balloons and toys on beaches along with my mother”, said Jyoti Laxmi, 24, who lives in a thatched house in the slum. “There are a total of 64 families living in this slum. All of us sell old paper, plastic, toys, etc”, said Laxmi

The community is deprived of basic fundamental rights like using public transport and cinemas. “People cover their faces and often utter bad words when they see us on the bus.  I am scared to go to public places “, said Pemba, a slum-dweller.

During the pandemic, the community faced severe hardships due to the lock-down during which the daily earnings of the community got affected. However, the government-supported them by providing food. “Government gave us Rs 2000 to buy food and groceries. It was a relief during that tough time”, said a slum-dweller.

“ We all are double -vaccinated and no one got Covid “, said Laxmi. “ We all have Aadhar cards and pan -cards. We also get electricity. What we do not have is land ownership or Pattas. We want better houses to live in. Also, we want our children to get an education and clothes to wear “, said Laxmi.

Last year during the assembly election each family got 1 kg of rice from the elected member from the constituency, according to slum-dwellers. The Narikuruvars demanded from the MLA a better road in the slum as there is heavy water logging during the Monsoons and they have to vacate the area to live in camps in government schools. For 13 years, the road has not been repaired and is in poor condition.

Houses covered with thatched roofs and makeshift toilets with broken pipelines speak of the deplorable conditions in which the Narikuruvars are living in the slum of Periyar Nagar.

In November 2021,  The Tamil Nadu government announced welfare schemes for the Narikuravar and Irula tribes in the chengalpattu district. 88 people from the Irular community received their scheduled caste certificate and 34 Narikuruvars got their Most Backward Class ( MBC) certificates. The community got housing bonds, family cards, and ration cards. They also got a loan amount among the other benefits.

“We earn Rs 200-300 a day depending on the workload. At times we return with no money. Men in the slum work as manual scavengers, cleaners, sweepers, rag-pickers, and women are mostly working on beaches “, said Sikar.

Identified as ‘gypsies’, the Narikuravar struggle with high illiteracy and unemployment, and a low level of sanitation. The main occupation of Narikuravar was hunting, however, since it was banned post-independence, they resorted to occupations like selling -homemade beaded jewelry and plastic products along beaches and temples. Due to the stigma attached to the community, they faced extreme social discrimination.

“They refused to admit my ailing husband into the hospital”, said Laxmi. “Doctors did not treat us well” narrated Laxmi and her friends the traumatic story of her husband who is an alcoholic and needed hospitalization. “ I faced discrimination in the labor room when the doctor refused to touch me, I had a sad experience during my second childbirth”, said Laxmi.

Normally the community relies on Ayurvedic or traditional medicine like herbs to treat minor ailments such as colds, coughs, headaches, and stomach aches. Some people said that natural medicine works even in snake bites. “We make paras ( a mixture of natural leaves like neem and turmeric ) to apply on wounds, it works”, said Sikar. The traditional Gingelly ( Sesame ) oil is often made by the Narikuruvars for home remedies.

When interviewed about ‘ health insurance, the people of the community who were not familiar with the term, said they have a ‘ family card’ which contains the name and gender of family members, it helps them avail government welfare schemes, they said. Similarly, a ration card and aadhar card allow the community members to access social services targeted at the poor.

The food habits of Narikuravar include everything from non-vegetarian to vegetarian diet consisting of rice and pulses. They buy oil, vegetables, and sugar from ration cards. They enjoy eating fish and mutton. “We don’t eat cat and dog meat, as people accuse us of eating bush meat “, said Nizar, a fisherwoman living in a thatched hut.

The sanitation condition of the Narikuruvars is hazardous.  Drinking water is obtained from a hand pump in the slum which does not provide a regular water supply. The entire slum area of Periyar Nagar is overcrowded with raw brick makeshift huts, few of which are covered with hay. The narrow lanes have piles of waste gathered by the rag-picker. From old buckets to rusted cycles, plastic waste, etc, the area has an abundance of scrap scattered around. With stray cats and dogs roaming around casually inside the slum, the Narikuravar live comfortably among street animals. They treat them as pets, feeding and caring for them.

Orange alert, in Chennai, due to the heavy rains leading to floods