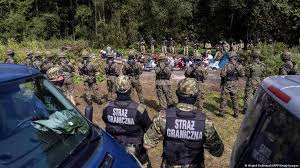 The European equivalent of Kim Jong-un

There are thousands of refugees with wire cutters at the border of Poland and Belarus, in freezing temperatures and a colder hostility from both sides. More than 11 people have died, countless injured, and around 1500 are in detention, so what caused this situation? The Hitler of this holocaust is Alexander Lukashenko, serving his sixth term as the president of Belarus. One might appreciate the administrative brilliance that has allowed him to be re-elected every year since 1994. However, all of these elections have not been fair and were rigged. He is also known as the last dictator of Europe and faces opposition from youth organizations of his country. Earlier this year, he had threatened Europe with a repeat performance of the 2015 migrant crisis with the introduction of human traffickers, drug smugglers, and armed migrants. He set this plan in motion by collaborating with middle Eastern airlines for more tours to Belarus. They allegedly offered fraudulent advice of crossing the border to migrants from troubled countries like Afghanistan, Syria, Iran, etc. Poland retaliated by deploying their police force with water cannons, with orders to restrain the refugees by hook or crook. So, what led to this humanitarian crisis at the doorstep of Europe.

From frying pan to fire

The Lukashenko government maintained its dictatorship by imposing strict rules and regulations, and the protests were brutally suppressed. The opposition is all but gone, with most of them imprisoned on false accusations and the others living in dread. The US being the self-declared flag bearer of democracy along with the European Union (EU), placed economic sanctions on Belarus. NATO members strongly condemned Belarus' attitude towards their citizens. Post-Brexit, the dogma of deterrence at any cost has dominated migration policies like towing back illegal migrants and informal detentions. A video released by BBC showed migrants squatting on a road in front of barbed wire and polish forces in a tense stand-off. The migrants arrived from a big temporary camp near the Kuznica border crossing, where they had set up tents. This gained notice only in May 2021, when Belarusian authorities forced a flight from Greece to Lithuania to land in Minsk. This was done to apprehend Raman Protasevich, a blogger and political activist, for allegedly provocative writing. This was dubbed "air piracy" by the European Union, which barred Belarus's airline from all its airports. To top it off, Belarus' key exports, such as petroleum and potash, were banned. To economically isolate Belarus, European investment banks ceased supporting its branches. After this, the income of Belarus was almost halved, and the landlocked country lost its connections.

Pressing where it hurts the most

Lukashenko found two weak points with the EU, which he decided to exploit. Since 2015 a refugee crisis has been looming in Europe, and currently, the EU is facing an energy shortage. Thus, Belarus openly encouraged refugees to visit their country and then dumped them sans resources on the border. Lukashenko then claimed that the EU is violating the international laws of asylum by not permitting the refugees to cross the border. Next, he issued a warning to Europe about breaking or switching off the gas pipelines passing through their territory which provide for around 50% of its fuel requirements. The Joe Biden government removed sanctions from Russia's Nord Stream 2, which would supplement the first Nord Stream for natural gas. The EU has decided to step up sanctions with the intensification of this row.

Uncle Sam passes it to Kremlin and the Sick man

The main ally of Belarus is Russia and allegedly gives political and economic backing to it. The foreign minister of Russia, Sergey Lavrov stated that the migrant flow is a result of US-led wars in Iraq and Afghanistan. He also dared the EU to offer financial assistance to Belarus to deal with this influx. The Russian government rejected Poland's assertion of Russia bearing responsibility for the crisis. Russia said that they would step in as a mediator for Belarus for improving ties with Germany and other EU nations if required. The US is already upset with Russia's growing influence over Europe through the Nord Stream 2 project and is seeing this crisis as a Russian scheme. Back in 2016, Europe had turned a blind eye to Turkey's violation of human rights to sign the EU-Turkey deal. Europe's benefit in this was to stem Refugee arrivals to Greek Islands by paying the Turkish president, Recep Tayyip Erdogan. So it was the EU that first introduced refugees into foreign policy as a bargaining chip and Lukashenko followed suit. Both the US and Turkey are on comparatively better terms with Belarus and most leaders believe that they support the stand of the authoritarian government.

Human rights activists have accused Polish authorities of denying medical aid, food, and shelter to the stranded refugees. The European Court of Human Rights ordered Poland and Latvia to supply food, water, clothing, adequate medical care, and temporary shelter to the migrants. Poland claims that Belarus refused the humanitarian aid intended for the refugees. A person from Yemen said that Belarusian border guards beat up his companion and broke up his leg. A migrant was also tossed into the river by a guard and robbed of their money, phones, and passports, according to reports. In a viral video, a Syrian refugee who sneaked into Poland shows him speaking to a Polish policeman saying, that the Belarusian military told him, "If you come back, we will kill you." Eve Geddie, director of Amnesty International's European Institutions Office, said that " Forcing people back who are trying to claim asylum without an individual assessment of their protection needs is against European and international law."

The situation is settling though, with Belarus removing some migrants from the border exhibiting a change of tack. Hundreds of Iraqis will be flying back to their country, the first repatriation flight since August. Belarus's move of using innocent migrants as a pawn is certainly detestable and should be addressed. In the near term, restoring Belarus' international rights may be a viable option, but in the long run, Lukashenko's authoritarianism should be attacked.