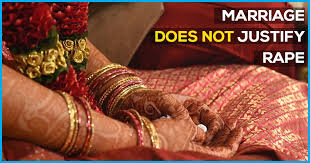 From Sexual Assault to emotional and physical trauma, women have suffered and experienced the heaviest blow of societal degradation and inhumanity. Women have been victims of violence, from female foeticide to sexual assaults like rape and sexual harassment. A woman is exploited physically and emotionally from the cradle to the grave. While there are many forms of violence that women have to face in their day-to-day life, one of the most heinous of them all, is ‘Marital Rape.’ “Sexual Intercourse or sexual acts by a man with his wife without her consent, the wife not being 18 years, is not rape” in India. The horror of going through the heinous experience of rape by her husband every night and living with the perpetrator and facing him every day is somewhat the story of every 2 out of 5 women in India, yet it is not considered equal to rape.

Since many forms of abuse are not regarded as "crimes" or go undetected due to Indian cultural norms and beliefs, violence against women in India is more prevalent than it appears at first glance. ‘Marital Rape’ is a case in point in this context. The phrase ‘Marital Rape’ comprises 2 terms- ‘Marital’ and ‘Rape’. On one hand, the term ‘marital’ represents ‘the conjugal relationship between a man and a woman, while on the other hand ‘rape’ refers to ‘the forcible ravishment of a woman by a man. It is one of the manifestations of her oppression and an expression of male chauvinism. It is the most heinous assault against virginity, youth, maternity, and women themselves that can be perpetrated. As a result, the term "marital rape" refers to 'sexual intercourse with one's spouse without consent and/or against one's will, achieved by force, the threat of force, harassment, or by taking advantage of a disabled person'.

“When a stranger does it, he does not know me and, I do not know him. With your husband, it becomes ‘personal’. You say this man knows me. He knows my feelings. He knows me intimately and then to do this to me- It is such a personal abuse….” - Anonymous Indian Wife

Rape is an act that renders a woman a "living corpse" by destroying her complete bodily and psychological composure. When a woman is raped by her own 'better-half/spouse,' the gravity of the crime and the impact of the cruelty is amplified. Over 70% of Indian women are victims of domestic violence. The 'Crime in India' report from the National Crime Records Bureau (NCRB) was frightening but not shocking.

Marriage: A License to Rape in India?

Sexual violence against women is deeply rooted and politicized all across the world. Perhaps no other crime allegation exposes a woman's integrity to vehement opposition and imposes the costs of shame and disgrace to such a high degree as rape. Factors unrelated to sexual violence, such as the victim's choice of dress, hairdo, and attack time, are regularly investigated and scrutinized. This contributes to the shame and stigmatization of sexual violence victims and is considered critical in supporting an affirmative defense and, eventually, constructing the case 'against' rape victims.

The Indian Parliament rejected a bill to prohibit marital rape when it was introduced. Marriage is a sacrosanct institution, according to certain lawmakers, and touching it will result in "marriage breakdowns." Women are encouraged to practice "quiet," "tolerance," "adjustment," and "compromise" to "preserve and protect the 'honour, pride, and ideals' of the Indian family, even though incest, violence, suicides, and murders are the price women pay.

Marital Rape: A Glance at the opposite side of the coin:

The issue of marital rape is double edged sword. There are certain arguments which are raised in favour of criminalizing marital rape as well as against it. Let’s have a look at these arguments-

·      1)Argument I: Is Marriage Implied Consent? - The idea that once a woman marries, she gives her husband unlimited, continuous sexual consent is profoundly ingrained in our culture. Marriage is a legal contract. A wife's irrevocable permission to sexual intercourse with her husband is included in the conditions of this arrangement. This has given rise to the notion that a husband has a "nuptial right" to sexual relations with his wife. Spousal/marital rape can never happen, according to the "implied consent hypothesis," because every sexual contact within a marriage is assumed to be "consensual."

·      2)Argument II: Burden of Proof (How can Marital Rape be proved)- Flavia Agnes (Founder and Lawyer of Women’s legal aid group, Majlis) expressed in an interview that proving marital rape is not easy and it would be a challenge for women. The woman will have to go to the sessions court to present her case. She must prove that sex was performed without her agreement on that particular night, that she was not in the mood for it, that he pushed her after she had gone to sleep, or that she was ill. That will be difficult. Lawyers could also take advantage of this. For filing such cases, they will demand large sums of money from the victim. That is exactly what we are experiencing today. This is financially draining for the woman.

Determining the value of evidence was one of the key grounds provided by the Centre for not acknowledging marital rape as a criminal offence in India. "The question is what evidence can the courts rely on in such circumstances as there can be no permanent evidence in cases of sexual actions between a man and his wife," the Centre's affidavit to the Delhi High Court states.

Circumstantial evidence is always used to prove rape. Even if committed, as is often believed, it may be difficult to prove because most women/girls are raped by someone they know. If a woman is the victim of marital rape, she is not raped only once, but she has a history of sexual abuse, which can be shown through forensic evidence. In forced rape, there will be proof of physical assault. Even if the medical examination is inconclusive, there are alternative ways to verify the deed — witness testimony, the woman recording her husband's admission of guilt via internet communication.

·      3)Argument III: The Law for Criminalization of Marital Rape will be misused by Women- False claims fly thick and fast in a country where perjury and contempt of court are not taken seriously. The fear that a law prohibiting marital rape would be abused stems from the widespread belief that spiteful wives are waiting for an opportunity to put their husbands in jail. The number of fake cases is highly exaggerated in reality. No one is denying that some fake cases may exist. And that should be a cause to work toward better implementation, so that we not only minimise the number of false cases, but also do not fail the real victims, allowing the real rapists to go free.

This argument that women would abuse the law against marital rape is based on a faulty assumption, as statistics show that 2 out of every 5 women in India are victims of physical and sexual domestic violence, and that most of the time, women lack the courage to report all of the violence that they are subjected to behind closed doors, so it is highly unlikely that if such a law existed, women would abuse it. As rape and domestic abuse statutes demonstrate, a lack of finances, legal assistance, and shame all make it difficult for women to obtain justice under these laws.

Status of Marital Rape in India and Internationally

Civil laws under the Protection of Women from Domestic Violence Act or Section 498-A of the IPC are currently married women's only recourse against non-consensual sex in India. Several countries throughout the world are enacting strict anti-marital rape legislation and recognising it as a criminal offence. Countries such as Denmark, Sweden, Poland, Norway, and the Czech Republic have already criminalised marital rape, while others are still attempting to do so due to the complexities of such a move, as well as the potential negative consequences for marital relationships and the risk of false accusations.

Marital Rape needs to be Criminalized

Marital rape is grave violence against women that requires the attention of the government. Women who have been raped by their spouses are more likely to be subjected to multiple attacks and to experience long-term physical and emotional issues. Since the effects of marital rape are so severe, criminalizing the crime of marital rape is necessary.

The IPC's Section 375 is likely the only law that discriminates against women of the same sex: married and unmarried women. It is illogical to have a law, that protects all women from sexual abuse in one part but allows a married woman's husband to rape her in the other. This discrimination violates Articles 14 and 21 of the Indian Constitution. The right to privacy, the sacredness of women, and the ability to make choices about sexual behaviour are all part of Article 21 of the Constitution, according to numerous Supreme Court decisions.

In an order issued on Wednesday, Justice Rajiv Shakdher stated that a man's immunity from rape for forcible intercourse with his wife violates article 14 and is thus unconstitutional. However, Justice Hari Shankar disagreed with Justice Shakdher, claiming that an exception to the marital rape legislation was "fair" and did not violate the constitution.

It can be argued that marital rape, or domestic violence in general, carries a significant stigma. Victim shaming is rampant in India because of which women are hesitant to disclose violence. Since separation, court fights, and divorce are frowned upon, most women are hesitant to leave violent partners. Instead, they preferred to compromise, owing to financial insecurity and social stigmas associated with divorce. Changes in the law and society are inextricably linked. In India, the most difficult war is against patriarchy, the institution of marriage, and family structure. In India, the majority of the weddings are 'arranged,' meaning that the women have no say, and the family marriage consents to the union.

Thus, it is high time that the legislature should take cognizance of this legal infirmity and bring marital rape within the purview of rape laws by eliminating Section 375 (Exception 2) of IPC. Along with this, we need to have a broader mindset concerning the institution of marriage and see women and men in their capacity and entity. It has been more than 73 years since India became independent, and it is high time that we free women from state-sanctioned marital rape.