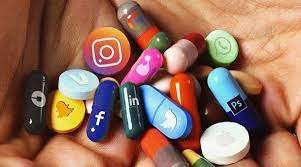 As the world becomes increasingly interconnected through social media, every part of our society becomes global. People try to find everything they need online, avoiding going to regular shops and using offline services for convenience. Nowadays, it's possible to find most things online, from groceries and clothing to medicine and even illegal drugs. Besides selling drugs through the dark web, dealers are now moving into a new field- social media.

It is becoming increasingly easier to purchase illegal substances. The new generation of dealers has wholly changed the drug culture and people's perception of it. If traditional drug dealing only engages with cash and in-person meetings, a new strategy provides online access to a choice of drugs. Cocaine, cannabis, ecstasy, prescription pills, and so on are sold through platforms such as Telegram.These channels are becoming increasingly popular as the app provides end-to-end encryption, ensuring privacy for both the seller and the buyer. Once the order is complete, you can pay through  PayPal, Bitcoin, and other measures. The only point at which the buyer must come in contact with the drug dealer is when picking up the drugs, although even that isn't always necessary. Some channels deliver directly to customers' doorsteps or leave the purchase in a specified safe place.

Before the emergence of Telegram dealers, darknet markets were the only option to find drugs online. However, that is quite a complex procedure that involves semi-advanced IT skills. Similarly, buying in person involves first finding a seller. This usually happens when a friend or an acquaintance sells or knows someone who does. Another option would be finding a dedicated spot where drug dealers are commonly found, which also requires connections or advanced research skills. Although anything is possible, and 3drug abuse has been a big problem for many years, these factors complicated the process and shielded people from the drug culture. After all, the more challenging something is, the less likely you are to pursue it until the end.

The largest illegal drug marketplace on the dark web, Silk Road, was a firstcomer in the industry until it got busted by the FBI in 2013. It has urged drug dealers into online business and proved that although the police are capable of hunting these criminals down individually, they are unable to eliminate the entire supply chain. As sellers rushed into an emerging market, new clientele became targeted. Children and teenagers, who nowadays are more technologically aware than many adults, became exposed to these accounts online and, through drug propaganda on Instagram, YouTube, TikTok, and Facebook felt compelled to try it.

The National Centre on Addiction and Substance Abuse at Columbia University surveyed over 2,000 teenagers about their drug consumption and use of social media. Results show that those surfing the internet daily are twice as likely to try marijuana as non- or infrequent users. A different study by Volteface, partnered with Survation, suggests that 24 percent of Snapchat, Facebook, and Instagram users regularly observe illicit drug content on these platforms. Besides, as the legalization of marijuana sweeps the USA, its online presence is definitely about to increase.

Many celebrities are already relatively open about drug abuse on their social media platforms. And although most of these are highly against the use of illegal substances and usually propagate a healthy lifestyle, some still romanticizeit. Teenagers likely have little understanding of what drugs are and how they affect the body and mind and view such posts with a hint of interest rather than appalment. Besides, one's friends may also engage in risky behavior and share that online. All of this combined paints a shady picture of drugs being an enjoyment rather than a road to disaster. Around 75 percent of teens exposed to drug content feel encouraged to engage in similar behavior.

As the drug boom is spreading, these channels are becoming popular worldwide. For example, the  Central Narcotics Bureau (CNB) in Singapore found over 20,000 SGD or 12,000 GBP worth of drugs during a raid in 2021 aimed at discovering addicts exploiting Telegram to make transactions. Another prominent instance is an international business founded by Amos Dov Silver, which covered Israel, Ukraine, Germany, the US, and some other European countries. By 2018, when the organization was busted, its monthly sales constituted.

Instagram also creates a suitable environment for advertising drugs. According to research conducted in 2014, at least 50 dealers were identified simply through drug sales-related hashtags in Instasearch in a single day. Most of these employ other apps for transactions, although they do promote their products through Instagram with pictures and videos directly.

Paul Sweeney, former Glasgow MP, laments that the news of such Telegram bots operating in Scotland is evidence that "the so-called 'war on drugs has failed." A similar depressive mood is evident in the words of Israeli authorities, who claim that "Telegrass changed the face of crime." Although the confrontation between governments and dealers is never-ending, the latter evolves so quickly is seems impossible to catch up.

Social media has a significant influence on drug supply, as well as on drug demand. Such easy drug access allows people to rush into decisions they might regret later. In contrast, traditional methods of dealing would have given them longer to reconsider. Similarly, staying clean is becoming increasingly challenging for repeat drug abusers and addicts, as deleting phone numbers and avoiding certain places appears useless. The more people dive into the culture through internet content, the more illegal markets, websites, and channels emerge. However, maybe it's time to question whether breaking off one of the main links in a chain would result in it rusting completely.