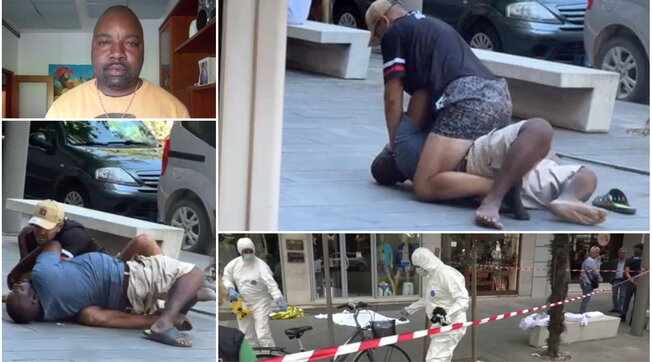 A 39-year-old Nigerian man was assaulted and killed by an Italian man in the city of Civitanova Marche on July 30. Source: Tgcom24.

On July 30, Italy witnessed the brutal murder of a Nigerian by an Italian man. The event happened in the city of Civitanova Marche, located on the Adriatic Sea.

The victim, Alika Ogorchukwu, was 39 years old, married with two children. He worked as a street vendor, a job he had to resort to after he lost his job as a laborer due to several injuries caused by a car hitting him.

According to the first reports on the accident, everything seems to have arisen from a quarrel for insignificant reasons, with an abnormal reaction on the part of the aggressor towards the victim who was begging him.

The first hypothesis put forward, that of alleged advances made by the victim to the aggressor's wife, was later denied.

According to the police report, the Nigerian vendor was allegedly chased by the 32-year-old aggressor, Filippo Claudio Giuseppe Ferlazzo, and then hit to death. Specifically, after chasing the man, he snatched the crutch from his hands and, after holding it like a weapon, beat him. Afterward, the attacker crushed the victim with his body and finished him off with his bare hands while the 39-year-old was on the ground.

The aggressor has been immediately detained by the police. His lawyers have required a psychiatric assessment for the patient to ascertain any psychiatric problems.

Italian politicians expressed their dismay concerning this incident. Giorgia Meloni, leader of the national-conservative and right-wing populist political party Brothers of Italy since 2014, said on Twitter that "There are no justifications for such brutality. I hope that the murderer will pay dearly for this horrendous murder. A prayer for the victim".

The secretary of the Democratic Party, Enrico Letta, expressed his disappointment by saying that "The murder leaves you dismayed. The unprecedented ferocity. The widespread indifference. The ultimate outrage would be to pass over and forget".

Matteo Salvini, secretary of Italy's Northern League, a right-wing, federalist, populist, and conservative political party in Italy, expressed his opinion as well on Twitter: "You can't die like this. A prayer for Alika. For the murderer, harsh punishment to the end. Security has no color".

This brutal murder raises some serious questions and reflections.

Firstly, while the aggressor was perpetrating the crime, many people were standing around him filming it with their mobile phones. No one intervened to defend and save the victim’s life.

It is difficult not to think that at least two men could have intervened to immobilize the aggressor. A life would have been saved and a family would not have been dismembered.

As very sharply pointed out by the famous Italian writer, Dacia Maraini, “we can no longer distinguish fiction from reality. Every action seems to take place on a stage and what do the spectators do in front of a stage? They watch and photograph. ".

A real spot-on comment on the current tragedy of living in a virtual world. Being a spectator has become an integral and essential part of today’s people's lives. So much so that people nowadays seem to either forget they are living in a real world, which is regulated by moral responsibilities, or they are just hungry for some minutes of fame that can make them gain some likes on their social accounts.

In either case, this is a serious problem. Especially when we are talking about human lives.

Secondly, the genuineness of the Italian political class's reaction. Given the situation Italy is in right now, with a recently collapsed government and an upcoming election, one cannot help thinking of an instrumentalization of this brutal event.

As declared by Matteo Renzi, former Italian prime minister and leader of the small party Italia Viva, ”A father was killed in an atrocious and racist way while passersby took video without stopping the aggressor. And instead of reflecting on what we are becoming, politicians argue and instrumentalize.”

Another spot-on comment. If we take, for instance, Matteo Salvini’s comment and compare it with some other declarations concerned with events linked to immigrants and the immigration crisis in Italy, it is easy to find some contradictions.

The most telling example is what happened in 2019 in Cara di Mineo, Sicily.

Cara di Mineo, which opened in 2011, was Europe’s biggest migrant and asylum seeker camp. It became famous for its high rate of violence and criminality. In 2019, Matteo Salvini, then interior minister, managed to close the location and fulfill, in this way, one of his pre-electoral promises.

The criminality problem was one of the main causes that led to the closure of the camp. According to Salvini, this was also necessary to hit the notorious Nigerian mafia that allegedly used the location to run its drug operations throughout Sicily.

For Salvini, this was a success in the field of national security as the territory was given back to its residents and several collateral problems caused by the camp's presence were finally solved.

As applying a black-and-white logic to current and past events is not correct, it cannot be excluded that there could be some truth in the explanations given. Nevertheless, the closure of the camp meant that all the immigrants living there had to be transferred to other, smaller camps. Some ended up in the streets with no help or assistance and in a difficult psychological condition.

What shocked me the most in this affair, though, were the minister’s declarations about the dogs living in the camp. He, as well as other benevolent politicians, tried to mobilize the population to save the dogs.

Salvini posted the following, controversial I would say, video Tweet on his account in 2019, right after the camp was closed: “Friends, we need you! 117 dogs are the last guests of the CARA di Mineo that as promised yesterday we closed, saving a lot of money. By August 31st, these friends must find a new home!”

Saving animals is a noble cause, but it becomes odd when this seems to take precedence over human beings.

This oddity is summarized by the comment of Luigi Ciotti, a priest of the Roman Catholic Archdiocese of Turin, who engaged in the fight against illegality and organized crime. He said plainly "First Our Lady and the Saints, now the dogs who, for heaven's sake, are creatures and deserve great respect. But what about people? I would like the same respect towards people, humiliated in their dignity."

But this does not surprise, as many politicians, at least in Italy, take advantage of the feelings of tenderness that cute animals invoke. Their social media accounts are packed with such images (curious readers can have a look at the following link where several Italian politicians are depicted with animals and a candid smile).

There is not much left to say. Maybe for some, or many, skin color really determines if a life is worth being saved. It seems that in Italy, the Black Lives Matter movement should go from being a mere hashtag to being substantially adopted and adapted to the local situation.

This will become even more imperative if, after the September elections, far-right nationalistic parties prevail.

In the meantime, a 39-year-old man, considered by the area’s residents as a good person, is dead, and his wife and two children are in mourning. They said it was not racial hatred. What was it then? And most importantly, who is going to support this family now? The state? Hard to believe. People? The same people who were standing and filming the event to fill their social media accounts (and maybe their ego)? I don’t think so.